Mina Cho is making her own kind of music 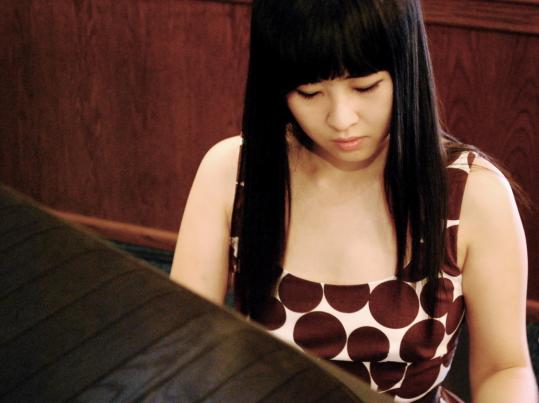 Christina Watka
“I didn’t want to make [it] too religious,’’ Mina Cho, a committed Christian, says of her CD’s mix of spiritual and secular music. (Christina Watka)
By Siddhartha Mitter Globe Correspondent / September 27, 2010

If there is a recurring motif in the unusual path from Korea to Boston of pianist Mina Cho it is revelation.

It was a pair of musical revelations that exposed the young woman, who as a child in Korea had the ambition to become a world-famous classical pianist, first to the emotional force of gospel, and then to the beauty and improvisational potential of South American folk music.

And revelation in the religious sense has accompanied Cho, a committed Christian, along the parallel tracks of religious and secular music, and into unexpected roles, for instance as the pianist in several Boston black and immigrant churches.

Each of the songs on “Originality’’ makes connections to points along Cho’s journey, but the allusions to childhood, to Korea, and to Christianity are subtle. “I didn’t want to make my album too religious,’’ she says.

So there is no overt church music here, save for the gospel backbone of one song, “I Like a Turtle,’’ which is inspired, in fact, by turtles. “Corea,’’ the opening track, is a pun on Cho’s roots and her appreciation of pianist Chick Corea. The muse for one song is the resident dog in the house where Cho lives. Other tracks are dedicated to friends.

“When I write a song I mostly start by imagining the scene,’’ Cho says. The music that follows — Cho’s pieces are all her own compositions — is intricate, with shifting time signatures and elements of Brazilian choro, Venezuelan lando, Argentine tango, and more. But it is also bright, open and lyrical, particularly the parts where saxophonist Andrew Halchak plays soprano sax, or when Shu Odamura joins on guitar.

Cho credits her fascination with South American folk forms to the Venezuelan Berklee professor Leo Blanco, whom she heard by happenstance soon after coming to the college in 2006, and with whom she proceeded to study intensively.

“It happened by surprise,’’ she says. “I barely knew about Latin music in Korea. I was interested in jazz standards and gospel; I was inspired by Oscar Peterson and Bebe Winans.’’ Blanco’s treatments of South American material opened new horizons. “It blew my mind,’’ she says.

“I think it’s the complexity and the simplicity,’’ she says, explaining the appeal. “Those sound like two opposites. It’s music that is very advanced; the time signatures, the harmonies are very complex. But at the same time it’s very melodic and sounds beautiful.’’

If Cho’s compositions have at times a panoramic, almost visual quality, it may also have to do with her field of study; her degree is in jazz composition and film scoring. She chose the latter for a simple reason: “I love the movies and I love music,’’ she says. The studies also gave her skills she can put up for hire, always a plus given the tenuous economics of the jazz life.

Like so many other Berklee grads, Cho is playing on the Boston scene but expects she’ll be heading to New York soon. Unlike most, however, her plan doesn’t depend on making it big in the crowded New York field. Her husband studies theology at Boston University, she says, and he is set to join the ministerial staff at a Korean church in Flushing, Queens.

For Cho herself, playing in churches has been nearly as important a part of her Boston experience as her Berklee studies. Soon after her arrival she landed a gig playing at the New Fellowship Christian Ministries in Dorchester. “The scene was something I could only have seen in the movies,’’ she says of playing gospel in a black church. “It was such a passionate congregation; it was really a blessing to be there.’’

Stints followed at the Park Street Church downtown, and more recently at a Baptist church in Somerville where Cho says the music director is Jamaican and many worshipers come from Brazil.

All this diversity — of cultures and musical styles, of spiritual and secular influences — might seem overwhelming to one who just got here a few years ago. But Cho isn’t fazed. She’s taking the material, forming images, and turning them to song.

Siddhartha Mitter can be reached at siddharthamitter@gmail.com.