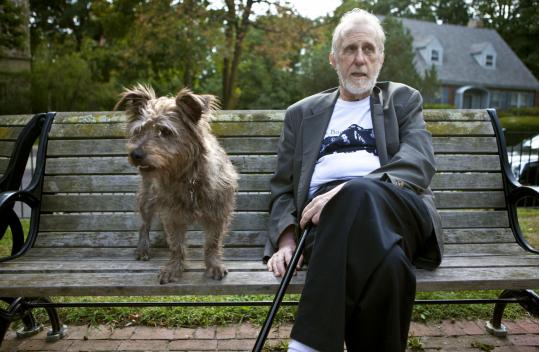 "I've always been playing piano, ever since I can remember," says Ran Blake, seen with Jackson in Brookline. (Aram Boghosian for the Boston Globe)
By Michael Brodeur Globe Staff / September 19, 2010

Composer, pianist, improviser, and New England Conservatory professor, Ran Blake is one of the most revered figures in contemporary music, perhaps known best for his revolutionary approach to teaching, in which the intuition of the ears takes priority over the instruction of the score.

Tomorrow, in celebration of Blake’s music, his 40-year teaching career, and his 75th birthday, NEC will stage a grand tribute to the composer at Jordan Hall, featuring performances of his works from NEC faculty and alumni, as well as a performance by Blake and Aaron Hartley in tribute to recently departed jazz singer Abbey Lincoln. We asked one of Blake’s best-known protégés, composer and keyboard player John Medeski of Medeski Martin & Wood, to catch up with his former mentor by phone.

John Medeski: So I was wondering, when did you first play a piano?

JM: And when you were young, what was it about reading music that you hated so much?

RB: I don’t know, I suppose I had some type of dyslexia, but it just bored me when I could use my eyes for foliage, paintings, and especially films. Instinctively, I would hear music on the radio or the phonograph records and would run to the piano. Maybe my ear was way ahead of my ability. I think, John, I was lazy; but number two, it maybe was a little visual learning problem. I’ve always liked algebra better than geometry. I just don’t like to think with my eyes. Unless I’m in a dark theater — or in the world of Hitchcock or Chabrol.

JM: So in a way, it was kind of a gift, because it enabled you to really explore the aural tradition.

RB: Yeah — and of course I wish I could deal with rap artists or B.B. Kings like you do — but I really could explore. I didn’t have any intellectual concept of formalization until a few years later. Instead of jazz, it was gospel and fairly dissonant 20th-century music that I was hearing. And at a point, I began hearing show tunes by Gershwin and Ellington, and wanted to retain bits of the melody, but go my own way harmonically and rhythmically. Needless to say, my phone didn’t ring very often for requests. Even though Springfield was restricted compared with New York, it was quite an adventure hearing different music.

JM: And you brought this aural tradition of learning music into the conservatory environment.

RB: I guess they say I did. I mean, it’s the way for years it’s been taught in Africa and Asia, and now there are ear courses at Berklee and all over, but I guess it was rather unique to have this at the college level of training.

JM: It seems like you have always deeply imbibed your experiences — like savoring and really enjoying everything. Whether it’s music, a film, food and drink, or even an encounter with someone. Do you think it’s harder for people to experience things like that these days with the pace of everything?

RB: Well you just answered that question, the pace. I loved the LP age. The 10-inches were wonderful. You could really concentrate through four numbers; and then the LPs would either have eight or six numbers which would last five or six minutes. And you could really play an LP over and over again and know it. My recent CDs, even speaking of my own, I can’t tell you what the first five tracks are. DJs must get hundreds of things a week. And the listening public, John . . . are MP3-ing thousands of things, and it’s lucky if we can be polite and listen to everything once. I wonder how people will develop a memory of Billie Holiday, or what Monk does, or which version of Abbey Lincoln’s “Throw It Away’’ is better. I mean it’s really a challenge.

JM: Through your 40-plus years of teaching, and I guess 50-plus years of recording and performing, what is it that keeps you so artistically consistent?

RB: Well I’m glad that you think that I am — and maybe I am, and maybe I’m not — but even if there is bragging in the answer, I still don’t know. I get tired and sometimes I’m not as consistent, but I guess that even though I want to hear new pieces that are coming out, I have so much to review of the music of the ’50s and the ’60s, and then how certain artists have grown, or not grown. So I think that just keeping up with seven or eight musicians — and hopefully three or four that are alive now — is a full-time job, and I think this acts as a stimulus. Of course, I do hear myself, but it’s really this interest in other people. I still feel guilty that there are so many blank spaces in what I’m listening to.

JM: At this point in your life, what do you feel are some of the foundations, the important points of your artistic development?

RB: I would say my love of singers — and Sara Serpa, Christine Correa, Dominique Eade. I’d say collaborations with people like David “Knife’’ Fabris, Aaron Hartley, Houston Person, and George Russell. I would say the world of film. I’d say study with Gunther Schuller, who could be very demanding but patient. And then I guess, really, teaching at the conservatory; the one-to-one, the ear classes, watching students grow, watching other faculty grow — listening to them, not just watching and observing. I think some of those are the main foundations. Study, reflection, collaboration, remembering these things, and living in three tenses: the past, the present, and the future — particularly the very distant past, the semi-recent past. And just spending a day in the different memories of your life is very intriguing to me.

Interview has been edited and condensed.