THIS STORY HAS BEEN FORMATTED FOR EASY PRINTING
Family

Not your average kids concert

'Yo Gabba Gabba! Live!' aims to be a rockin' show that parents will like too 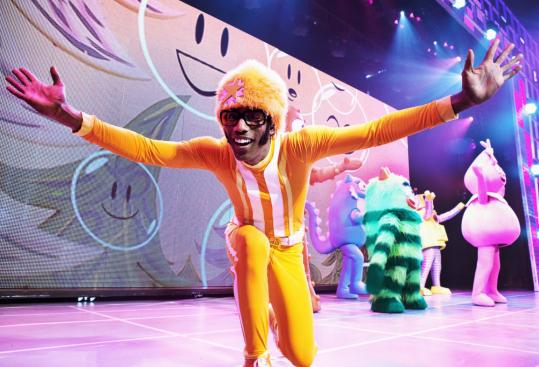 BETHEL, N.Y. — There’s a subtle crowd tension at most children’s shows, a dark and brittle vibe radiating from bored parents seething in their pricey seats and vowing never, ever again.

That’s exactly the wrong kind of intensity for a live show, and it’s a feeling that Christian Jacobs and Scott Schultz, two skateboarding, music-loving Southern California dads, pledged to avoid. They’re the creators of “Yo Gabba Gabba!,’’ the Nick Jr. television show that uses a unique mix of vivid retro graphics and expertly curated indie rock and hip-hop to draw fans from preschool to grad school. Jacobs and Schultz used their own tastes to develop a TV show they would want to watch, then applied that same formula to a stage production. “Yo Gabba Gabba! Live! There’s a Party in My City!’’ romps into the Citi Wang Theatre on Sept. 25-26.

“We’ve been to those shows where you’re saying to yourself, ‘Please, let it be over.’ We wanted to completely do away with that,’’ says Jacobs, a former child actor and music-video producer. His credo is simple: “Why do you need to take the parents completely out of the equation?’’

Starring DJ Lance Rock and a variety of musical and dance guests, “Yo Gabba Gabba! Live!’’ is deeply rooted in the flash and spectacle of rock concerts and comes with an impressive pedigree: It’s produced by S2BN Entertainment, a company founded by Michael Cohl, a former CEO of who secured past deals with the Rolling Stones, U2, Madonna, Jay Z, and Shakira. The 60-city national tour launched in Bethel, site of the original Woodstock rock festival, and cast members made a side trip to the Woodstock Museum to gain some pre-tour perspective.

“Yo Gabba Gabba! Live!’’ is the first foray into children’s tours for Mike Luba, former manager of the String Cheese Incident and other bands, and current president of the music and family entertainment division at S2BN. “We came from a total rock ’n’ roll space. Neil Young’s [lighting director] did all the lights. . . . We ripped off a bunch of stuff from the Stones and U2 in terms of their video, so we just built it like a rock show,’’ says Luba backstage at a meet-and-greet area for fans and show characters. “As parents who love music, this was something that we wanted to be able to share with our kids. That was really what we were going for, to create something that didn’t make parents want to scratch their eyes and ears out having to sit through it.’’

It was equally important for the show’s creators to craft a live performance that would have the same look and feel as its small-screen cousin. “We would go see shows that seemed more like weird Broadway productions of TV shows, and it just didn’t feel right for us,’’ says Schultz by phone. “We wanted a show that would be a kid’s first rock show. Something exciting where families can have fun together.’’

On screen, many children’s shows have characters and music that are saccharine and one-dimensional; the stage shows are often worse.

“It seemed like many of these shows were designed for a specific age and left out anybody else. It just didn’t seem like there was a whole lot that included stuff for the parents,’’ Jacobs says, his energy carrying through a cross-country phone connection. “Growing up we used to watch shows with our family. We’d all sit down and watch TV together, whether it was variety shows like ‘Donny and Marie’ or ‘The Muppet Show’ or whatever. Why couldn’t you have a preschool show and that kind of a variety show at the same time? It worked with ‘Sesame Street’ years and years ago. Why couldn’t it work again?’’

The energy in “Yo Gabba Gabba! Live!’’ is carefully modulated. The show is split into two segments with a welcome intermission/potty break that also gives costumed characters a chance to mingle with the audience. The larger-than-life monsters might wow the kids, but the music is designed to hook the parents. The show’s soundtrack blends thumping dance beats and rock of all persuasions, from breezy pop to riveting old-school hip-hop. Note to parents: Bring earplugs for the kids.

So how well does heavy rock go over with kids? During the TV show’s first season, the enigmatic Japanese art-rocker Cornelius delivered one of the wildest performances likely seen on any children’s program. The song was “Count Five or Six,’’ a title and theme that seemingly made it a natural for adapting in a kids show. It proved to be a challenge, Jacobs says. “We actually toned it down a bit — they came in and did the song live and just melted everybody’s face,’’ Jacobs said. “We were a little worried about how it would work, would this be OK for kids, but it’s actually one of my kids’ favorite segments.’’ That success gave the duo some freedom to expand musical boundaries for the live show, too.

During the brief 2009 tour that served as a test run for this year, Dinosaur Jr. played a song, DMC of the old-school hip-hop group Run-DMC taught dance moves for a Dancey Dance segment, and Biz Markie (also booked for this year) led a beat-box chant. Jacobs was floored. “Granted, my 4-year-old doesn’t care who Dinosaur Jr. is or Run-DMC — he doesn’t know. But he can tell when I’m stoked and he gets into it. ‘Dad’s happy about this.’ It makes this cool energy that’s the whole idea behind the show.’’

The 2009 mini-tour also revealed a surprise about the audience, Schultz says. “The ratio of dads who come out to the shows is astronomically higher than at normal shows. They’re coming out to the ‘Yo Gabba’ shows with the mom and the kids, or just the dad and the kids. That’s kind of what we felt when we started. We wanted to share in the experience with them, and not just plop them down in front of the TV.’’

Michael Saunders can be reached at m_saunders@globe.com

YO GABBA GABBA! LIVE!: THERE’S A PARTY IN MY CITY!