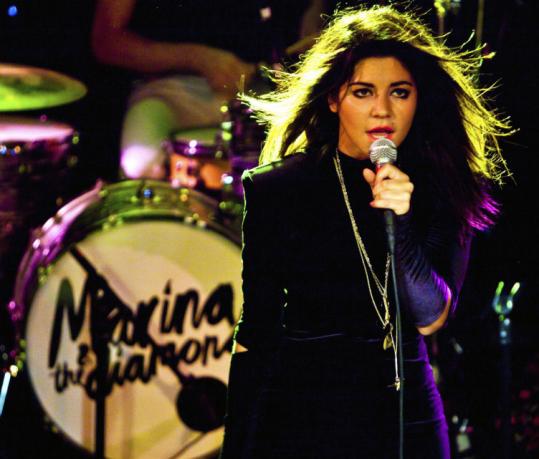 For Boston concertgoers, Wednesday night at the Paradise represented two distinct and much anticipated debuts. A performance from rising UK pop star Marina and the Diamonds marked the grand reopening of the venerable old rock institution after undergoing extensive renovations over the summer. Knocking out a few walls, including the mid-level balconies, and streamlining the flow of traffic through the front of the club made for much improved sight-lines and a larger floor space. (The surly bar service, however, hasn’t been updated.)

For Marina Diamandis and her four-piece touring band, it was their first-ever stop in Boston. The captivatingly quirky and emotionally complex balladeer/pop-diva hybrid had been resoundingly praised in the States leading up to this tour. For a giddy, sold-out crowd she arrived as advertised, gliding through a rambunctious, if rather short set of material drawn from her debut album, “The Family Jewels.’’

Much has been made of Diamandis’s ability to alternate between joyous dance-floor pop and contemplative balladry with the same ease as her voice jumps from a low, throaty husk to fluttering, operatic highs, and the pace of the set didn’t disappoint in that regard.

Songs like “Shampain’’ energized the crowd with a raving, strobe-light pulse, while on the galloping “Girls’’ the band summoned up a charging piano funk. For slower numbers like the sweeping string weeper “Numb,’’ Diamandis took to the piano by herself. Here the distraction of pre-recorded backing vocal tracks that meandered a bit clumsily throughout the upbeat numbers gave way to the singer at her loveliest.

It’s hard to re-create the multitrack harmonies of a record in a live context, but still, it might have been more advisable throughout to leave the heavy lifting entirely to her. She’s certainly up to the task; every song, from the achingly romantic affirmation of human imperfection “I Am Not a Robot’’ to the flagrantly theatrical pop of “Are You Satisfied?’’ were belted with resounding, moving clarity. Nonetheless, with her first Boston date, she’s built an impressively solid foundation. Unlike the old Paradise, there’s only very little room for improvements.

MARINA AND THE DIAMONDS At: the Paradise, Wednesday