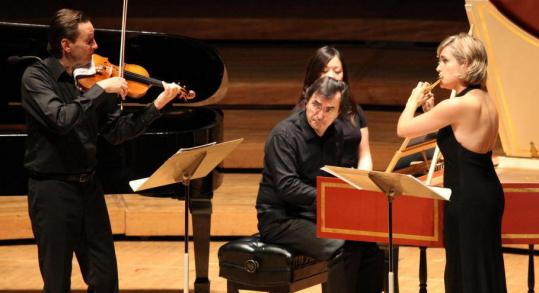 LENOX — If you want to make composers seem radical, you program them alongside Beethoven. If you want them to seem like they’re working too hard, go with Mozart. But if you want them to seem rational, then Bach is best, and that was pianist Pierre-Laurent Aimard’s gambit at Ozawa Hall on Tuesday, placing one of Bach’s most intricate exercises, the intricate “Musical Offering,’’ alongside works by modernist masters Elliott Carter and György Ligeti.

Aimard said he wanted to hear how “new polyphonies’’ paired with Bach’s contrapuntal mastery; appropriately, the performance initially emphasized Bach’s uncanny craftsmanship. In the Trio Sonata from the “Offering,’’ flutist Clara Andrada de la Calle and violinist Mats Zetterqvist (both members of the Chamber Orchestra of Europe) polished their tones to a high gloss, scrupulously matching their articulation against the grid of Aimard’s sober harpsichord accompaniment.

Bach’s geometry led into Carter’s differentials. Both the solo violin “Riconoscenza’’ and the solo flute “Scrivo in vento’’ (Zetterqvist and de la Calle giving superb, confident readings) democratize hierarchy of detail, with singing lines taken over by their ornamentation — dramatic rough bowing in the former, stabbed high notes in the latter, the evocative noise at music’s chaotic boundaries. Aimard also found expressivity in schematics. The three-part solo piano “Tri-Tribute’’ recombines the resonant crags of “Fratribute’’ and the hard, bright flutter of “Sistribute’’ into the ruminative “Matribute,’’ gradually filling in a precipitous opening gesture with teeming life. “Two Diversions’’ set up tortoise-vs.-hare situations of variable speeds, but mercurial vectors — murky then scattered in the first, scurrying and pointed in the second — make the figuring more than trivial.

In six of the canons from the “Offering’’ — de la Calle and Zetterqvist again, with Aimard at the piano — their Apollonian approach subtly brought out Bach’s rhythmic playfulness. Such dexterity takes on more dramatic import in Ligeti’s 1982 Horn Trio, grippingly rendered by Aimard, Zetterqvist, and horn player Jonathan Williams. The construction at first seems comparatively arithmetic, but sure-footed deviations — like the performance, so precise as to seem freed from effort — reveal the steady pulse and repeated figures as misdirection. A bouncy ostinato saturated with activity, a clanging march that knocks itself out of step: Ligeti sets out intricate rules and then intensely undermines them. Like Bach and Carter, Ligeti’s mechanisms engineer glimpses of deeper, more unruly mysteries.

With members of the Chamber Orchestra of Europe