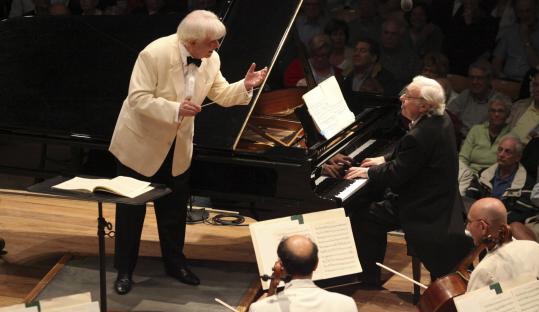 LENOX — Last summer at Tanglewood was so rainy you almost expected to see trumpets and trombones marching two-by-two into the Koussevitzky Music Shed. But the weather gods have been largely cooperating this year and the weekend featured three smoothly dispatched BSO programs under beautifully clear skies, with mostly standard repertoire, and for a change, nary a conductor substitution in sight.

It’s true that Christoph von Dohnanyi came to Tanglewood early this summer to step in for James Levine in performances of Strauss’s “Ariadne auf Naxos,’’ but the appearances of this dependable veteran maestro on Friday night and Sunday afternoon were both on the original season schedule. Friday’s program began with something of a rarity, Mendelssohn’s “Calm Sea and Prosperous Voyage,’’ inspired by two short poems by Goethe. The BSO hadn’t played it since 1916. It may not be displacing the composer’s maritime masterpiece, “The Hebrides’’ Overture, anytime soon but it features some attractive orchestral scene painting, especially in the nervous tranquility of the opening pages. Douglas Yeo brought some exotic colorings to the wind section by trading in his bass trombone for serpent, a rarely spotted period instrument.

Richard Goode was on hand as soloist in Mozart’s Piano Concerto No. 14, providing a characteristically lucid and tasteful take on one of the composer’s less frequently performed concertos, a compact work that bristles with musical invention. Friday’s mighty warhorse, Tchaikovsky’s “Pathétique’’ Symphony, benefited from Dohnanyi’s canny and incisive direction. Here the immense first and third movements came across as well-paced and well-sculpted statements, dramatic but not histrionic, with the brass potent but never overpowering. Bassoonist Richard Svoboda and clarinetist William R. Hudgins contributed fine solo work.

Saturday night Shi-Yeon Sung, one of the orchestra’s two assistant conductors, led the BSO for the last time in that capacity, a lithe and energetic traversal of works by Wagner, Copland and Stravinsky. Sung has had a busy two years with the orchestra, and her crowning moment surely came last fall, when she showed remarkable poise in replacing Levine on short notice to conduct Stravinsky’s “Symphony of Psalms’’ for the first time in her career, without any rehearsals.

She will settle in Berlin next year, guest conducting in Europe and serving as associate conductor of the Seoul Philharmonic. As evidenced in Saturday’s vividly detailed performances of Stravinsky’s “Firebird’’ Suite and the flashy Prelude to Act III of Wagner’s “Lohengrin,’’ Sung is capable of telegraphing both energy and musical sensitivity in her every gesture. She and the orchestra found the plaintive melancholy of Copland’s streetscapes in “Quiet City’’ with Thomas Rolfs (trumpet) and Robert Sheena (English horn) both turning in grounded, richly expressive solo turns.

The same could not be said for the evening’s star soloist, Hilary Hahn, who gave an oddly detached performance of the Sibelius Violin Concerto, technically brilliant but interpretively bland. All the notes were there, and with striking clarity, but if Hahn has anything particularly urgent or distinctive to say about this cornerstone violin work, she kept it to herself. She did return with an encore though, the Sarabande from Bach’s D-minor Partita, sensitively rendered.

On Sunday Dohnanyi was back on the podium, this time with another young violin soloist, the German-born Arabella Steinbacher, making her BSO debut with an uncommonly songful rendition of the Beethoven Violin Concerto. Dohnanyi’s opening tempo was spacious, almost ponderous, but from the ascending octaves of Steinbacher’s very first entrance, it was clear that this was to be a lyrical, unhurried account, with the soloist unspooling generous quantities of warm, unblemished tone. Her playing throughout had an admirable self-possession, though I wished that its elegance had been deepened by some sign of the visceral forces churning beneath this music’s polished surfaces.

The afternoon ended with Dvorak’s Symphony No. 8 in a vibrant reading. The trilling horns and the rest of the brass served up the requisite nationalist excitement in the finale, though here the lilting choreography of the third movement was what lingered in the mind as the audience streamed out of the Shed. The program also honored the contributions of BSO violinist Joseph McGauley, who is retiring at the end of the summer after 32 years with the ensemble.

At: Tanglewood, Friday and Saturday nights and Sunday afternoon