This time around, McLachlan’s Lilith is a more intimate affair 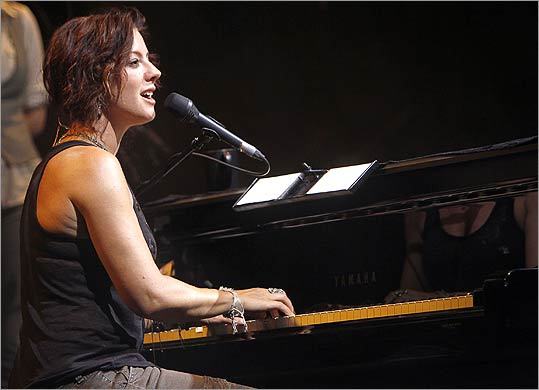 MANSFIELD — The tour conditions for this year’s Lilith Fair, Sarah McLachlan’s reawakened female-centric traveling festival, might have been disappointing — canceled dates, lackluster attendance at the surviving shows — but the conditions at Friday’s concert couldn’t have been more perfect.

It wasn’t just the weather. In a way, the lower-than-hoped attendance also worked in Lilith’s favor. The first half of the 12-act, eight-hour concert was turned over to two stages set up in a wooded picnic area on the Center grounds, and attendees were shoulder-to-shoulder with room to move, not packed like sardines.

The five-part folk harmonies of Winterbloom and the jazzy preciousness of Zee Avi kicked things off, but it was McLachlan bassist Butterfly Boucher who brought a much-needed jolt of electricity. She got an assist from McLachlan herself, but Boucher’s adult pop and dry wit had enough spark to stand on their own.

That spark was matched by Serena Ryder, whose gospel-country rasp (combining Melissa Etheridge’s growl and Dolly Parton’s trill) fueled a terrific, rootsy set. The stiff and charisma-free Ann Atomic, on the other hand, seemed like she’d just arrived on the bar-band circuit. Missy Higgins offered sensitive singer-songwriter fare in the classic mold, but she shone thanks to a clear, handsome voice and a quiet openness.

Except for a brief set on a barely publicized fourth stage by Marié Digby, whose self-aware reliance on cuteness over investment in her songs seemed like a repudiation of Lilith’s mission, the show then moved to the main Comcast stage for a solo acoustic Beth Orton. Songs like “She Cries Your Name’’ and “Stolen Car’’ were stark and dark like English folk, and her fragile vocals sounded like the moment when cracks first start to show.

That wasn’t remotely an issue for Sara Bareilles, who played “Love Song’’ at what seemed like the venue’s loudest setting before moving on to the rollicking “Gonna Get Over You’’ and a version of Beyoncé’s “Single Ladies’’ reimagined as a poppy New Orleans stomp. The jaunty, outward-directed performance was the exact opposite of Cat Power, who spent lulls between songs simply smiling, waving, and waiting silently. Aiming to unsettle rather than embrace, Power’s reverb-laden guitars and brushed drums occasionally coalesced into swampy rockabilly or agonized, intense soul music.

Tegan and Sara changed the mood dramatically, with the itchy momentum of “The Ocean’’ setting the tone. Crediting the original Lilith Fair (on which they played a single date as teens) for marking the start of their career, the sisters brought a terrifically hooky rock power to songs like “Speak Slow’’ and the yearning, gorgeously uncertain “The Con.’’

McLachlan’s closing set began with two throwbacks to the first Lilith era — “Angel’’ and “Building a Mystery’’ — but her new songs sounded just as strong. “Loving You Is Easy’’ was upbeat but cloudy, while the quietly brutal “Forgiveness’’ hurt all the more for its gradual, organic increase in volume.

At the end, she brought all the acts together onstage for a spirited version of Patti Smith’s “Because the Night.’’ Whatever tour woes have befallen Lilith, it was an indication that McLachlan was smart enough to remember to save her frustration for those who didn’t show up, not those who did.