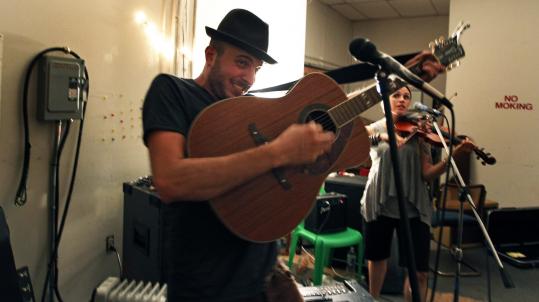 Naseem Khuri loves the music of Bob Dylan and the Band, so last year when it came time for his Boston-based Americana band Kingsley Flood to record an album, the group’s members repaired to Vermont to turn a studio there into their own Big Pink.

They found the rural atmosphere they wanted — there are peepers on the opening track — yet “Dust Windows’’ is anything but sleepy.

“I wanted to have a fierceness, an urgency to it. I wanted to make a punk record using acoustic instruments, if that makes any sense,’’ said Westwood native Khuri, 31.

From the spaghetti-western gallop of “Roll of the Dice’’ to the quiet ache of “Cathedral Walls,’’ the hooks are hard to shake, the music sounds both old-timey and of the moment, and Khuri’s ragged but passionate vocals tie it all together.

Kingsley Flood was recently named best roots act in Boston in the 2010 Phoenix Music Poll, and “Dust Windows’’ was called “a cracker of a debut’’ by the Americana website No Depression. The band plays tonight at the Rhumb Line in Gloucester and tomorrow at the Lizard Lounge in Cambridge.

A lot of people have heard Kingsley Flood already without knowing it. A summerlong WBZ-TV News ad campaign that debuted on the high-profile July 4 Esplanade telecast features the band’s “Cul de Sac,’’ with Khuri singing, “I’ve got my thumb on the pulse of a nation.’’

“I immediately thought it was something kind of special we could use,’’ said WBZ interactive media manager Jonathan Case. He found Kingsley Flood after asking for band suggestions on Twitter. “The feel of that song I found very traditional, yet a modern sound. . . . It’s playful and smart.’’

In earlier rock eras, a TV ad might have been considered a sellout, especially for a musician whose role models include Dylan and the Clash’s Joe Strummer. But the music business is different now, and Kingsley Flood decided to take the extra bit of buzz for its self-released album. The band never even tried to get signed by a record label.

“It seems like they don’t have the importance today that they used to have,’’ Khuri said. “We’re just trying to do it the old-fashioned way of doing good shows, shows people remember, and leaving it all onstage. I’m gonna awkwardly dance and I’m gonna sweat my [butt] off and give as much energy as humanly possible.’’

Khuri’s family roots are Palestinian and Christian; his parents grew up mostly in Beirut and came to the United States in 1972 when his father was offered a fellowship. Conflict in the Mideast and his father’s career as a heart surgeon kept them here, except for occasional visits back. Khuri said he had a typical suburban teen’s life of baseball and rock ’n’ roll: “The only differ ence was I had a funny name.’’

In fact, he’s not the first Khuri with a fondness for Western vernacular music. His father, who died two years ago, “had this weird obsession with Irish music’’ and classic American folk. One of Khuri’s favorite memories is attending one of Bruce Springsteen’s “Seeger Sessions’’ concerts with his father, where they both knew all the songs.

Still, Khuri’s desire to find solutions to the endless Mideast conflict is a big reason he studied international relations at Bowdoin and the Kennedy School of Government. But after getting his master’s degree in public policy from the Kennedy School, he got “totally jaded’’ by colleagues obsessed with their resumes and by the bureaucracy they faced in trying to make a difference through government or corporate work.

“The whole time I had these songs sort of brewing,’’ he said, “and just found that I could connect with people a lot more through art and music. I just put more faith in the idea that art can cause as much change as the other stuff.’’

He started playing guitar while attending the private Noble and Greenough School in Dedham and listening to Boston bands like Buffalo Tom, Letters to Cleo, and the Lemonheads. “In college, like everyone I went through a big Bob Dylan phase. I’m still in that Dylan phase.’’

He began writing songs. His elliptical lyrics are about “how do you navigate through a world of haves and have-nots? Basically the album sets out through a bunch of characters [to ask] how do you get ahead in this world, and how much politics do you have to play?’’

The band’s name sounds like a historical reference, but that’s a con. “I was walking on Kingsley Street in Allston, where I used to live, and literally water started rising on my feet, and a little kazoo floated by. And it turned out some sewer main broke or something. And we called it the Great Kingsley Flood of 2005,’’ Khuri said with a laugh.

In 2006, he and Nick Balkin met when both answered a Craigslist ad seeking roommates for a Cambridge apartment. Soon after they moved in, Khuri played some of his songs.

“I think my initial reaction was ‘Oh great, here’s another totally necessary singer-songwriter with an acoustic guitar,’ ’’ Balkin said via e-mail. “But Naseem’s music had this urgency that drew me in. Though he writes great lyrics, his real gift is melody. He’s incapable of writing a chorus that isn’t big, anthemic, and instantly hummable.’’

Balkin, who’s also the guitarist for Logan 5 and the Runners, picked up a bass. Will Davies plays drums. Guitarist Michael Spaly played on the record, then moved to Seattle; George Hall has taken his place. Fiddler Jenée Morgan rounds out the lineup, with the frequent addition of trumpeter Chris Barrett. Everyone still has a day job.

One big change has been that a few months ago Khuri moved to Washington, where he lives with his girlfriend and works as a consultant, training public and private employees in negotiation and conflict resolution. He said the distance may actually have benefits. “It is tough to rehearse and stuff, but we make it work,’’ he said on the phone from D.C. “When I come back to play, I’m itching to go nuts.

“In college, on a Saturday night everyone else would go out, and I remember watching videotapes of Springsteen concerts and sort of going crazy in my little dorm room and having those dreams and stuff and never really doing anything about it,’’ Khuri said. “Now we’re actually sort of on the road to doing something about it. Long, long, long way off, but on that track.’’