Etheridge draws out the rock and reminiscences 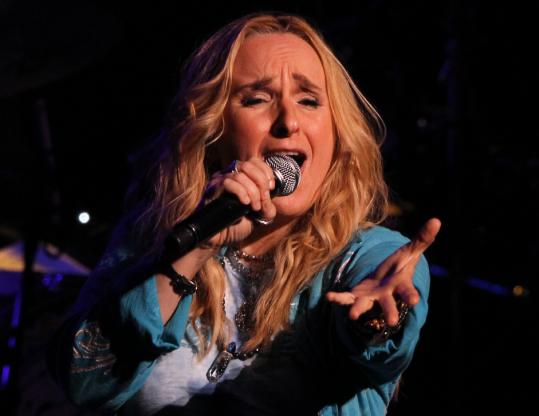 Melissa Etheridge drew on her new album, “Fearless Love,’’ for half of the 20 songs in her 2 1/2-hour performance Saturday night. (Matthew J. Lee/Globe Staff)
By Sarah Rodman Globe Staff / July 12, 2010

Melissa Etheridge is a wanter.

For more than 20 years she has laid out her demands. She wants you to come over, bring her some water, realize she’s the only one who can love you right, and refrain from telling her who she can love or marry, among many other items on the want list.

Whether wrapped up in stinging power chords, undulating rock rhythms, and anthemic choruses or set to hushed acoustic strumming, all that romantic, sexual, political, and spiritual desire can pack an enormously powerful punch, as it did Saturday night at the Citi Wang Theatre.

Etheridge’s palpable need not only to communicate those desires but also to find the zone where the enthusiastic audience could share them was job one. And it was a job admirably, passionately done with the help of a locked-in backing quartet. But the singer-songwriter also wanted the songs to be long and to talk, a lot, which threw a hitch into the show’s giddy-up.

Etheridge often worked up a head of steam — including highs like the sizzling new rocker “Miss California,’’ the urgent manifesto “We Are the Ones,’’ or the sensual ballad “You Used to Love to Dance’’— only to pull back into the station a few moments later for entertaining but energy-draining reminiscences of her time in Boston or musings on her romantic failings or explanations of songs that required no explanation. Or she would start out a song full of fire, like set-closer “Like the Way I Do,’’ leaning into her whiskey-and-smoke voice to revel in her ache in a gut-wrenching fashion — only to drag out the climax vamping on a basic riff. Sometimes those vamps would include a peak, for instance, like the eye-popping four-handed solo Etheridge played with her lead guitarist in “Bring Me Some Water,’’ but less could have meant more overall in terms of momentum and song count.

While Etheridge may have been feeling nostalgic about her time at Berklee College of Music, her early gigs, and her first trip to a gay bar — for trivia buffs it was called Prelude — she was resolutely living in the present tense when it came to her set list, with half of the show coming from her harder-rocking new album, “Fearless Love.’’

It’s easy to understand her inclination to feature it since it has some of her most solid songwriting in years, taking her back to her traditional rock roots. From stadium-ready anthem “Indiana’’ to encore “Gently We Row,’’ a contemplative hymn to mothers and daughters, Etheridge proved that wanting can be an endless source of inspiration.