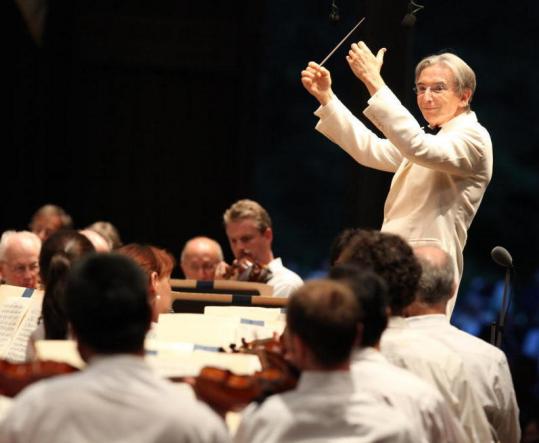 LENOX — The Boston Symphony Orchestra’s summer season at Tanglewood opened last night with music director James Levine still on the sidelines, recovering from back surgery. Those with memories of the Symphony Hall season might have feared a sense of deflation from the absence, but not this time. The night, devoted to Mahler’s epic Second Symphony, retained a sense of event, largely because Michael Tilson Thomas, a seasoned and impassioned Mahler champion, was recruited to replace Levine on the podium. He led the orchestra, vocal soloists, and the Tanglewood Festival Chorus in a highly dynamic, interpretively distinctive, and viscerally exciting performance of this monumental score.

Thomas, the longtime music director of the San Francisco Symphony, has recorded the complete Mahler cycle with that orchestra. Overall, his Mahler and Levine’s Mahler are apples and oranges. Levine can build remarkable depth and intensity via a certain centripetal force; Thomas conveys a more extroverted drama and a kind of nonstop centrifugal energy.

In the massive first movement, which Mahler described as a “Funeral Celebration’’ for the hero of his First Symphony, Thomas showed a gift for drawing out expressive details, the gentle arc of a phrase in the strings, a piquant dissonance in the woodwinds, without losing sight of the work’s larger structure. His tempos had great elasticity but, with a few exceptions, did not give up their forward drive.

More generally, Thomas tends to hear the geographic center of Mahler’s music as further East than most conductors do. He loves, in certain stretches, to help eminently cultivated symphony orchestras find their inner village street band. Those moments of folk inflection came out particularly in the middle movements. He also drew a lovely lilting quality in the opening of the second movement, honoring Mahler’s description of this music not as bliss experienced in the present but as a tender memory of a distant happiness.

But the first half of this work also contains dark and often ferocious music of violent extremes. Mahler’s fourth movement then, titled “Urlicht’’ or “Primal Light,’’ is a kind of arrival in a clearing, an ineffably beautiful moment of repose. Stephanie Blythe was the superb vocal soloist, her generous mezzo-soprano blanketing the Shed in dusky yet radiant tone.

Mahler’s finale is one of the most memorable in his oeuvre, full of hair-raising music depicting the end of days, but also containing some of his most spellbindingly quiet passages, as in the hushed first entrances of the enormous chorus. The TFC here sounded magnificent, as it did singing at full throttle. Layla Claire was the sweet-toned soprano soloist. The orchestra, responsive and engaged, played brilliantly for Thomas.