Who you gonna call for otherworldly rock? 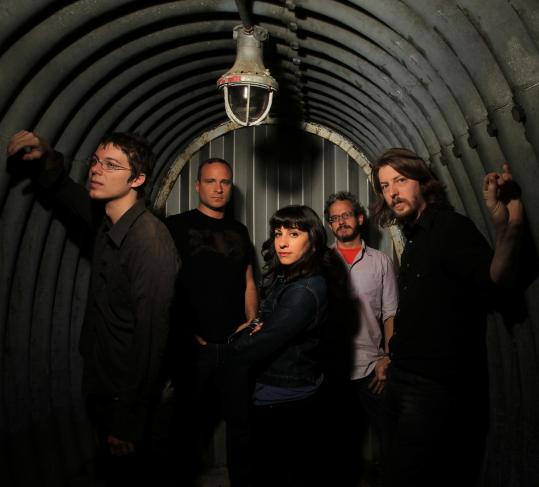 He’s not a ghostbuster, exactly. But from the name of his band right down to the way he records his songs, the music Jeremy Lassetter makes with his mostly instrumental Ghost Box Orchestra seems to tap into unknown forces of inspiration. Call it a noisy, shape-shifting corner of the spirit world, if you will — apparitions summoned as sound rather than specter.

“A friend told me about a TV show that was supposed to be cool called ‘Ghost Hunters’ and I watched it — and, of course, it was cheesy,’’ says Lassetter, over an afternoon snack at an Allston bistro with bandmates Nazli Green (keyboards) and Christopher Johnson (guitar).

“But I did notice what microphones they were using to record ghosts. There’s something called a ghost box that has a white noise generator, a digital recorder, a Radio Shack microphone, and [an apparatus] to constantly flip channels to pick up little bits of FM and AM radio static. You put that all together, press record, and you conduct your seance. You ask your questions out loud and give the ghost time to answer back. Supposedly, through all of these things working together, you hear a communication.’’

“Concept-wise it blew my mind, because that felt like how I record when I’m alone in my house by myself,’’ he adds. “I always have something kind of droning and I’ve got a riff, but I play it 30 different ways to see how its sounds. You don’t know what all of this stuff is going to do when you put it together.’’

The fruits of those recorded experiments — brought to life and transformed with the entire band — can be found on “The Only Light On,’’ Ghost Box Orchestra’s dazzler of a debut that comes out next week. GBO is self-releasing the album in a hand-stamped, numbered limited edition of 300 copies, and will celebrate the release with a free show in the front room of the House of Blues on Wednesday.

Like a few of the band’s favorite things (shoegaze, post-rock, psychedelia, space-rock) and overt influences (Mogwai, Sonic Youth, Black Moth Super Rainbow — and did we say Mogwai?), “The Only Light On’’ is a sumptuously multilayered affair for the senses; seven tracks of whisper-to-roar delicacy and power that, taken together, make for a spectral stretch of music that sounds far greater than the sum of its individual parts.

“Being able to put your personal touch on it — that’s what makes us sound like what we sound like,’’ Lassetter says. “When I’m making the stuff on my own, it’s kind of mellow. And then I get together with these guys, and it gets loud.’’

Even though GBO did not set out to be a mostly instrumental outfit, Green claims the band’s tendency to think “texturally’’ made vocals less of a concern or priority. “That’s something I gravitate to,’’ Green says. “I mostly listen to instrumental music and post-rock stuff, and that’s all about texture and the interweaving of alternative melodies.’’

“If your instinct and gut says you don’t need lyrics for this, don’t do it,’’ Lassetter adds.

Green, 32, and Lassetter, 30, had been friends prior to forming Ghost Box Orchestra with a slightly different lineup two years ago. Nazli recalls that when Jeremy told her he wanted to “bring the songs to life’’ with a band, “it couldn’t have come at a better time for me. It was winter and depressing, and I hadn’t played with people in awhile.’’

The nascent group was still without a drummer. But in a stroke of good fortune, Green met drummer Martin Rex at a barbecue and asked what instrument he played. Rex, 36 — who also plays with GBO bassist Dennis Noble, 35, in the local psych-rock merchants Broken River Prophet — had also helmed the kit for Lockgroove (one of the most fearsomely terrific space-rock outfits to come out of Boston). Suffice it to say that he was soon enlisted for a group with similar inclinations.

Johnson, 24, a guitarist who grew up in Salt Lake City, moved here to go to architecture school. When he first heard Lassetter’s music online, he was impressed by a guy he affectionately calls “a tone freak,’’ whose sonic palette was strikingly similar to his own. “We got lucky,’’ Johnson says. “We knew what we liked before we had even met. I love the drone element, and locking into repetition. I think it’s incredibly powerful.’’

The band recorded “The Only Light On’’ inside an abandoned Freemason’s lodge-turned-studio in Chelsea, tracking the songs live and then choosing the most inspired performances from among the takes. It was the first time the band had set foot in a studio. “We went out to Chelsea to check out this room and it was this humongous, cavernous space,’’ recalls Lassetter. “As soon as we walked in, there was all this woodwork and Egyptian hieroglyphs on the wall. It had amazing craftsmanship, but it also had this weird, ethereal mystique. It felt like us.’’

Jonathan Perry can be reached at roughgems@aol.com