His goal: ‘a big global party’ 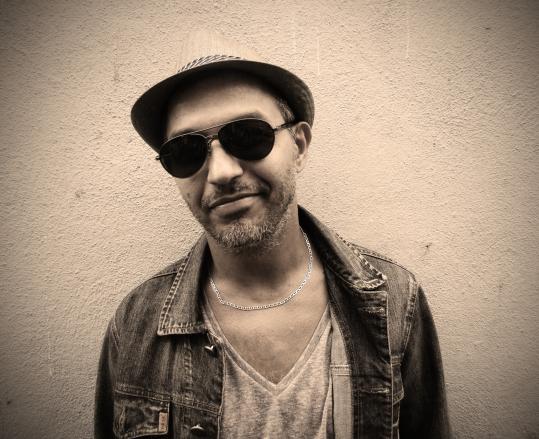 “I call reggae the skeleton key of music, since it fits in almost any lock,’’ says Jacob Edgar, who spent years as a globe-trekking talent scout for the world music label Putumayo before launching his own label, Cumbancha, in 2006. “You can put it in almost any recipe and make it taste better.’’

It was on one of his Putumayo scouting missions that Edgar discovered the master musical chef Lamine Fellah, a guitarist, singer, producer, and songwriter whose music embodies reggae’s chameleonic qualities. The son of an Algerian diplomat, Fellah grew up bouncing between Europe and Africa, an international upbringing that provided a singular musical education.

Now living in Ecuador’s Andean capital, Quito — an unlikely home base for a rising world music star — Fellah has forged an expansive reggae-steeped sound blending West African, South American, and North African influences in his band Sarazino, which performs at Johnny D’s on Thursday as part of an inaugural US tour celebrating the release of “Ya Foy!’’ (Cumbancha).

“I feel like we can still add more influences,’’ says Fellah from Los Angeles. “The objective is to make a big global party. I want everybody present in my songs.’’

Fellah traces the Sarazino concept back to his teenage years in Burkina Faso in the mid-1980s, when he first got a taste of reggae’s seemingly infinite malleability. Beyond the pervasive popularity of Bob Marley, local musicians created their own hybrid approaches to the Jamaican groove, adding elements from traditional forms.

“Burkina Faso was important because we were surrounded by music all the time, African, reggae, and Cuban music,’’ Fellah says. “I was starting to write songs, and I realized that it was possible to mix styles up.’’

When Fellah moved to Montreal in 1988, it was ostensibly for college, but actually to pursue his passion for music. Sarazino’s first incarnation balanced reggae and West African rhythms, but Quebec’s lively music scene didn’t supply him with the right ingredients, and Fellah increasingly looked south for inspiration. A chance trip to Ecuador gave him an insatiable taste for Latin American culture, and he relocated there in 2003.

Fellah’s wide-open ears have served him well as a producer in Quito, where he’s found an international cast of collaborators despite Ecuador’s backwater reputation. On “Ya Foy!’’ he showcases local luminaries such as Benin-born vocalist Revelino Aguidissou and Ecuadorian guitarist Pablo Estrella, while also featuring guest appearances by Jamaican reggae great Toots Hibbert (from Toots and the Maytals) and King Chango toaster Blanquito Man.

For Sarazino’s maiden voyage, Fellah had to transform a studio project into a road-ready band capable of opening for international acts like Angélique Kidjo and the Skatalites. The combo he brings to Boston features a young Ecuadorian rhythm section and vocalist François Kency, one of Ivory Coast’s most popular bandleaders. They met two years ago in Abidjan and struck up a long-distance friendship. When Sarazino’s US tour started coming together, Fellah recruited Kency, whose music reflects a pan-Ivorian sensibility, drawing on traditions from across the ethnically diverse nation.

“I fell in love with his attitude and his energy,’’ Fellah says. “When we had this tour, I was wondering if he could come join us and he was delighted, even though he never played with Latin musicians. He’s always writing great melodies, and he has this tremendous curiosity to listen to new things.’’

Fellah could easily be describing himself. He had recently settled in Quito when Edgar first encountered him on an expedition as head of A&R and music research for Putumayo. Attracted by his eagerness to encounter new sounds and his rapidly developing Afro-Latin reggae concept, Edgar included Sarazino tracks on the Putumayo compilations “World Party’’ and “Latin Reggae.’’

“I loved the vibe and the sound, and we became friends,’’ Edgar says. “He has such a positive spirit. He likes to collaborate, and amazing artists are interested in collaborating with him. We just recorded a duet with Pato Banton.’’

For Fellah, reggae is more than a skeleton key. It’s a passport that provides passage into his painful past. Islamic radicals assassinated his father in the early years of the civil war that broke out when Algeria’s military canceled the second round of 1991 elections to prevent a sweeping victory by the Islamic Salvation Front. His family has lived in exile ever since, but despite his years abroad he’s never sought to shed his identity (sarazino is nonpejorative French slang for people of North African descent).

One of Sarazino’s key ingredients is rai, though the raucous Algerian street music is more an undercurrent than an overt reference, as Fellah draws on rai’s narrative drama and romantic sensibility.

“Rai’s stories and themes are more important than the rhythm,’’ Fellah says. “I didn’t want to give this feeling a predominance, but I need it to be there, a little part of Algeria. It’s not easy, because when you mix so many influences, you have to find the right balance.’’