Landmarks and hallmarks in Fenway fete 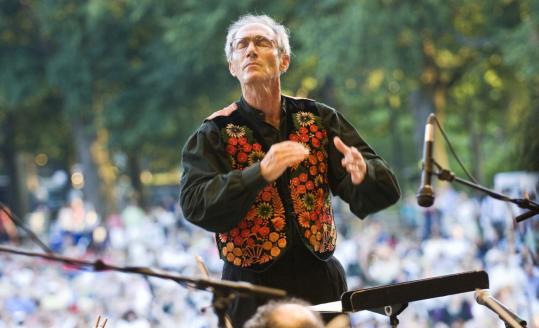 The “lyric little bandbox,’’ as John Updike famously referred to Fenway Park, is finally being visited by a big band.

The Boston Landmarks Orchestra, a group thoroughly ensconced in the neighborhoods of Boston, is gearing up for a concert next Wednesday at a place that is for many the very epitome of the city. The home of the has, of course, played host to a variety of musicians, including the Rolling Stones, Bruce Springsteen, and Jimmy Buffet over the last several years. Yet the Landmarks concert is a first, says Charles Ansbacher, the orchestra’s founder and music director. (Tickets are free but no longer available, having already been distributed.)

“It is a partnership that has never happened before in the history of the Red Sox or Boston,’’ Ansbacher says by phone from his Cambridge home. “There has never been, as I understand it, a symphonic concert at Fenway Park. There have been brass quintets and various ensembles there, and it may be there was an orchestra that played the national anthem. But as far as a full concert by an orchestra, we are the first.’’

Since 2001, Ansbacher has made a mission of bringing orchestral music into various Boston localities, with one slate of concerts at the Hatch Shell on the Esplanade and another in local parks. “Our purpose is to perform accessible music in a way that attracts and retains people who enjoy orchestral music and introduces Bostonians to a kind of music that is not easy to get to know in this day and age,’’ he says. “The landmark and the music are mutually attractive.’’

Of course, as the site of $328 tickets and $10 beers, present-day Fenway doesn’t exactly stand for the kind of everyman accessibility that drives the Landmarks orchestra. Still, Ansbacher says, the ballpark is unquestionably “one of the iconic structures of New England. I don’t know how you would define a landmark in any other way.’’ He presented the idea of a Fenway performance to Larry Lucchino, the Red Sox president, who, Ansbacher says, “was quite intrigued with the concept. He is making the ballpark available to us, which is a big deal.’’

The first half of the Fenway concert is an instance of the kind of easily digestible program Ansbacher enjoys presenting. It begins with Copland’s “Fanfare for the Common Man’’ and includes works by Rossini, Victor Herbert, and Leroy Anderson, winding up with the “Ode to Joy’’ from Beethoven’s Ninth Symphony. (The full symphony will open the orchestra’s Hatch Shell concerts a week later.)

The second half is devoted to “The Jackie Robinson Story,’’ a sort-of new piece with a complex backstory. The music was written by composer Julian Wachner, a former Bostonian, in 2006 for “Lifting the Curse,’’ a Landmarks commission about the historic 2004 World Series win with a text by Bill Littlefield, the author and veteran NPR sports commentator. Ansbacher says that for a reason he cannot quite put his finger on, the piece never came together in its original form. So he asked his wife, Swanee Hunt, a writer and former US ambassador, to write a new text narrating Robinson’s life, a story Ansbacher, like many, finds “close to unbelievable.’’ (The new composition, unlike “Lifting the Curse,’’ makes no reference to the Red Sox’ failure to sign Robinson when they had the chance in 1945.)

Deval Patrick, the first African-American to be elected governor of the Commonwealth, will narrate the piece about the first African-American to play in the major leagues in the modern era. From their vantage points on the field and in the stands, audience members will be able to look up at Fenway’s right-field roof deck where Robinson’s number, 42, has been retired, as it has in every major league park. Even for the hardened that may prove a powerful experience.

Radio broadcasts
The Fenway Park concert is one of three that will be broadcast live by All Classical (99.5) in the coming days. The others are the annual Boston Pops July Fourth concert from the Esplanade and pianist Marc-André Hamelin’s recital at the Rockport Chamber Music Festival on July 11, which will include Liszt’s Sonata in B minor as well as music of Berg and Debussy. WGBH-FM (99.5) will continue its tradition of broadcasting Tanglewood concerts every weekend in July and August.

Speaking of Tanglewood
For those wishing to brush up on the music being performed at Tanglewood this summer, Jeremy Yudkin, who teaches musicology at Boston University, is again offering a seminar series that gives a nontechnical introduction to major works on the BSO’s schedule in advance of the performances. The lectures, which Yudkin has been presenting since 1983, take place at the Lenox Library and begin tomorrow with a general overview of the Tanglewood season, and then on Friday and Saturday afternoons through the season.