With new album, Black Helicopter goes on the offensive 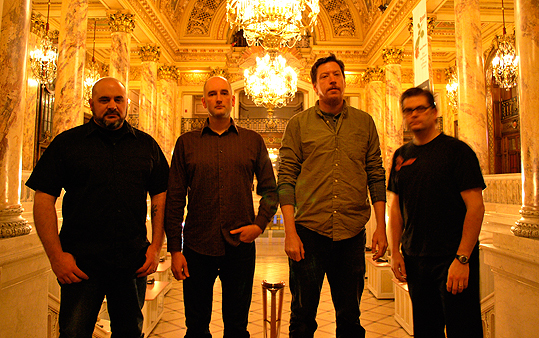 If they were prone to conspiracy theories, the members of Black Helicopter might be tempted to believe that nefarious forces were shadowing them, surveilling and subverting their every move. And given the setbacks surrounding their latest album, who could blame them?

It all began promisingly enough. Signed to Sonic Youth leader Thurston Moore’s Ecstatic Peace! label (it had also released Black Helicopter’s “Invisible Jet’’ CD in 2006), the veteran Boston band had just finished recording what singer-guitarist Tim Shea calls “the best record I ever made.’’ That’s saying something, given that Shea was in the Boston noise-rock outfit Green Magnet School, which was signed to Sub Pop Records during its (first) heyday.

Moreover, it seemed as though Black Helicopter, which headlines tomorrow night at P.A.’s Lounge in Somerville, was on the verge of reaping the benefits of a distribution deal struck between Ecstatic Peace! and major label goliath Universal Records. But the album, three years in the making thanks to day jobs, families, a lineup change, and old-fashioned procrastination, needed a name and a cover. In one fell swoop, the band landed both — and that’s when the problems started.

“I came up with an idea that we should try to get [iconic SST Records-affiliated artist] Raymond Pettibon to do some artwork, or to release the rights for use of an existing piece, which is ultimately what happened,’’ recalls BH bassist Zack Lazar. “There was a lot of effort behind it. [Pettibon] didn’t know us, and there was no motive or money involved for him to do anything. But we found an existing print we wanted to use.’’

The print, a crude black and white drawing of what can be described as a ticked-off Jesus Christ clutching an equally aggravated snake, happened to be titled “Don’t [expletive] With the Apocalypse’’ — which the band thought perfectly captured the thunderous Sturm und Drang of its music. “We got approval [from Pettibon] and thought, Great! Now we can move on to designing the rest of the jacket,’’ says Lazar. “It was a perfect storm of artwork and title.’’

Alas, not only did Universal’s lawyers have a problem with the offending titular cuss word, they also weren’t too thrilled with the back cover art: an uncredited Internet image of a mushroom cloud rising on the horizon — topped off with an extended middle finger. (A literal F-bomb, as it were.) Other issues soon emerged, including trouble concerning the naughty name of a new song, “King [expletive].’’

“We talked about alternatives like putting on a sticker or covering it up somehow,’’ says Andrew Kesin, Moore’s partner at Ecstatic Peace! “But it would have pushed back the release date and would have been an additional expense. At the end of the day, it didn’t feel like it was worth it; and there was no way we were going to compromise.’’

For an indie-rock band of 40-something rock dudes trying to catch a commercial break, Black Helicopter did the unthinkable: They said no. Instead, the band opted to release the album as it was, through Ecstatic Peace!, which suits the band just fine. “We knew it wasn’t going to get big distribution in all of the places people weren’t buying the other albums from anyway,’’ says drummer Matt Nicholas. “The irony is, we’re better suited to get into the mom and pop stores where customers actually listen to our music.’’

Guitarist Eric Baird, the newbie with three years’ service in a band whose lifespan stretches back more than a decade (and whose founding members have been friends since before Green Magnet School, and Lazar’s and Nicholas’s previous band, Kudgel, even existed) agrees.

“It means more work for us, certainly,’’ says Baird, a studio whiz who’s helmed mastering sessions for the likes of the Dropkick Murphys and mastered “Apocalypse,’’ which was recorded at Shea’s Analog Divide studio in Allston. “But in a way, we’re a bit more in control of what we’re doing.’’

Despite the hassles — or perhaps because of them — a band that’s always flown under the radar is aiming for higher altitudes this time around, with plans to tour with ex-Silkworm alums Bottomless Pit this fall, and a vinyl release of “Apocalypse’’ on the Boston boutique label Limited Appeal.

“It took a long time to put together and get everyone in the same room, so I hope someone somewhere picks up on it,’’ says Shea about a work that careens from Mission of Burma-esque art-rock anthems (“Invasion of Prussia’’) to Pavement-style contact highs (“Record Player’’) to a majestic sprawl all their own (“In the Blood’’). “We’re not tied down to what the modern trend is. We’re just trying to do something timeless — a record that you could come back to again and again, rather than one that fits into this niche that’s happening right this second.’’