Phish burrows into a deep groove 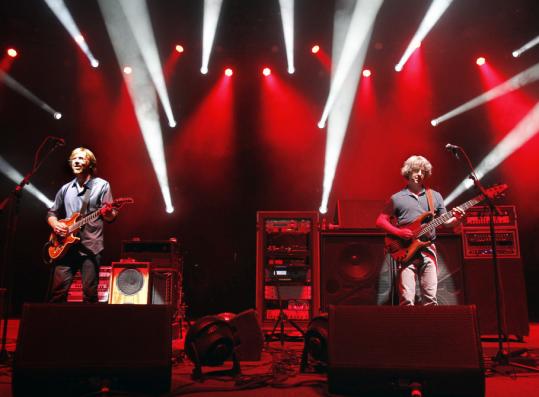 MANSFIELD — With Phish, the how is more important than the what, and last night at the Center, the band was at ease and fluid coursing through two lengthy sets that saw new material, inspired covers, and dynamic versions of old favorites.

Since its return last year from a second attempt at retirement, Phish Mach 3 has been tightening its improvisational attack and finding a balance between tune craft and deep musical exploration.

The band offered a grand sweep, touching upon funk, country, and unhinged psychedelia. Guitarist Trey Anasatasio, bassist Mike Gordon, drummer Jon Fishman, and keyboard player Page McConnell kept the wheels on track, even as improvisations seemed on the brink of veering out of control.

The band opened with a cover of “Lit o Bit,’’ a fun funk tune that bled into the angular grooves of “Camel Walk.’’ The band stayed even-keeled through the hick romp “Possum’’ and space-rocking “Divided Sky.’’ It was all well played, but well behaved by Phish standards.

But then the band rolled up its sleeves and ripped up the end of its first set with a manic “Kill Devil Falls,’’ which set up a new song, “Dr. Gabel,’’ that sounded like a bit of Mod-ish Who. Anastasio commented on the sold-out house’s reception of the song and offered thanks by going back to the band’s early days for “Run Like an Antelope.’’

While the first set seemed like Phish a la carte with its many flavors, the second set was all about burrowing into a groove. Gordon shook the house leading the band through “Mike’s Song’’ and “Weekapaug Groove.’’ The band proceeded into Robert Palmer’s “Sneakin’ Sally Through The Alley’’ and found an edge to the wry tune. From there, they jammed through “Light’’ and “46 Days.’’

Through it all, the set had a smooth arc, even as the band pumped up the energy and poked around the spacious arrangements of “Limb by Limb’’ and the hyperactive “Golgi Apparatus.’’

The band’s demeanor is not really in keeping with the debauched nature of the Rolling Stones’ “Loving Cup,’’ which closed the show, but it came across with a weary traveler’s sense of arrival.

PHISH At: The Comcast Center