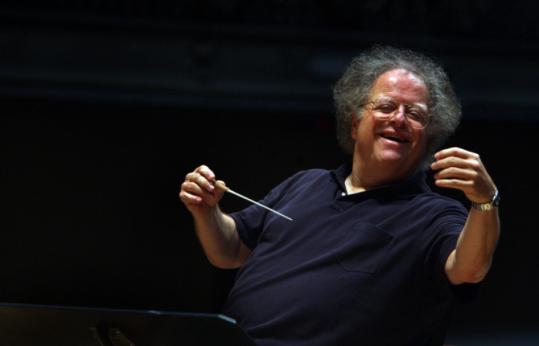 Two months after his most recent back surgery, Boston Symphony Orchestra music director James Levine has not recovered enough to conduct at Tanglewood this summer, the BSO announced yesterday. By missing eight scheduled concerts, Levine will add to the 22 concerts, or 60 percent of scheduled performances, he missed in the 2009-10 season as conductor of the BSO.

The Tanglewood news, while not surprising, dampened the excitement in Lenox, where businesses depend on the annual influx of symphony-goers.

“He is unquestionably a musical genius, but that said, I really feel the Boston Symphony Orchestra needs a dynamic, healthy music director,’’ said Phil Halpern, who owns Brook Farm Inn with his wife, Linda. In a decade of owning the inn, he said, this is the latest in the season the couple has had rooms available for the BSO’s opening night, July 9.

Sharon Walker, owner of the Apple Tree Inn, also said bookings are down for this summer. She invoked the name of Levine’s predecessor, Seiji Ozawa. “When Ozawa was here, Tanglewood had much more energy or spark,’’ Walker said.

Levine, who was not available for comment yesterday, released a statement through the BSO in which he spoke of his disappointment at having to withdraw from Tanglewood.

“My doctors have told me I have made great progress even beyond their expectations but have advised me to err on the side of caution and take the summer off to recuperate more fully from the two back surgeries of this past year,’’ the statement read, in part. “The most important thing is to not risk any delay in my recovery so I can return to good health and my conducting duties at the BSO and Met this fall without further interruptions.’’

While Levine has missed concerts repeatedly during his six-year tenure for a range of health issues — including a torn rotator cuff, the removal of a kidney with a cancerous growth, and an earlier back surgery — this latest cancellation has been handled differently than others.

Instead of waiting until the last minute, BSO managing director Mark Volpe said he wanted to line up suitable replacements well in advance of Levine’s scheduled concerts. Volpe visited Levine 10 days ago in New York and, while encouraged the conductor is recovering, he realized he would not be able to take the podium this summer.

“We basically said, with a month before the opening of Tanglewood, we wanted to have a clear course,’’ Volpe said. “We focused on frankly giving him enough time to regain his strength and stamina so he can be back in the fall.’’

In summer, the music director’s job is only partly about leading the orchestra in concerts. A large portion of his work is with the Tanglewood fellows, the young, talented players who have scored summer posts to study and perform works as an orchestra.

While Levine is welcome to visit this summer, it is not clear whether he will be able to work at all with the fellows, Volpe said. That’s why Thomas and von Dohnányi will stay for several weeks to work with the young musicians.

Thomas said he had been planning on taking time away during the summer, staying in a small cabin on the California coast, writing and resting.

“But it didn’t take much convincing because, really, my life would not be as it is without my experience at Tanglewood, which was magical for me,’’ said Thomas, who was a Tanglewood fellow in the late ’60s.

Volpe said it is premature to discuss whether the BSO might do the same to give it more security. But he did say that he and Levine will probably sit down, once the conductor has recuperated, to discuss his future at the BSO.

“We’re going to wait until he’s recuperated more fully and assess what his health is going to be going forward and clearly define what his relationship with the BSO will be going forward,’’ Volpe said. “Nothing’s changed, other than the fact we had to cancel more of his appearances.’’