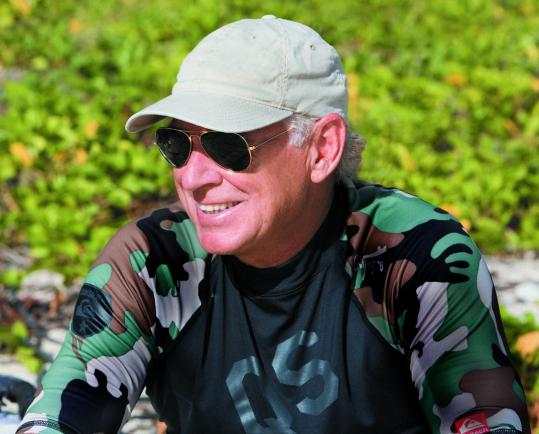 Q. You have the public image of a free-for-all party guy and surfer, but weren’t you just down in Haiti helping out earthquake victims? And you’re going down to the Gulf Coast to lend a hand; what are your thoughts on the oil spill?

A. You have to figure out what to do instead of just bitching about it. One thing is that we have partnered with a little boat company and we’re building these small skimmer boats that can go into shallow water and actually help with the cleanup. Having grown up on the Gulf Coast, I don’t do this for headlines, but just because I want to give back. . . . We’re about to open our [Margaritaville Hotel] in Pensacola Beach, which is right at ground zero. We had a job fair there for 40 jobs — and 1,000 people showed up.

Q. On a lighter note, I loved your “Buffet Hotel’’ album that came out in the last year after a trip to Africa. You must have been startled to see a Buffet Hotel in Mali. And the place had great music.

A. A couple of friends who went on the trip knew about it, but I soon learned it’s like the Grand Ole Opry of West Africa. What I love is they have their own record label and a club, hotel, and bar. So that was familiar territory to me. I loved the fact that it’s a very self-contained process. Going there was a life-altering experience.

Q. You also just put out the double-CD “Encores,’’ taken from the acoustic encores you’ve done the last two years. It gave you a way to revisit some of your more obscure tunes and to show your roots by covering songs by Jesse Winchester, John Prine, and Bob Dylan.

A. On tour we have a 17-piece band that works people into a frenzy, but as big as this thing has gotten, I never want to forget being a folk singer, because that’s what I grew out of. I want to keep the roots alive of just me and a guitar since I spent so many years doing that. By ending the shows that way feels like a nightcap. It feels good.

Q. One of the songs is Dylan’s “Blowin’ in the Wind,’’ pulled from your Newport Folk Festival appearance a couple of years ago. Would you play Newport again?

A. Yes, I loved it. I loved the surroundings. I would do it again.

Q. Any other recording projects?