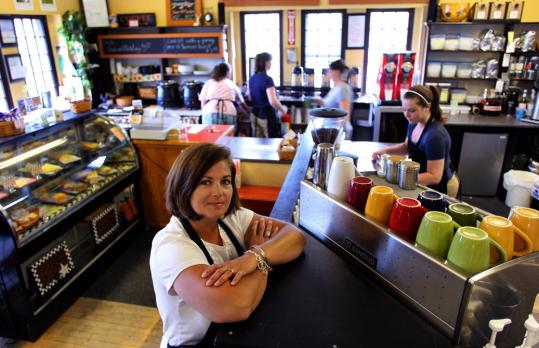 The threatening letters started arriving in early 2009, a few months after Jim Whitney opened J Dubs Coffee, a tiny storefront coffee shop in a Manchester, N.H., strip mall. Fifteen came over a few months, right around the time Anthony Demings, owner of the Brooklyn Coffee and Tea House in Providence, was receiving his own string of letters, and Lorraine Carboni, proprietor of Somethin’s Brewin’ Book Cafe in Lakeville, began getting calls and then lunch hour visits from a brusque man.

“I was blown away by his demeanor,’’ Carboni said. “He was rude to my staff. He was adamant about getting information. They were threatening me with lawsuits. So I did what I had to do, and ended my music program.’’

Across New England, church coffeehouses, library cafes, and eateries that pass the hat to pay local musicians or open their doors to casual jam sessions are experiencing a crackdown by performance rights organizations, or PROs, which collect royalties for songwriters.

Copyright law requires that any venue where music is performed publicly, from cheerleading competitions and mortuaries to nightclubs and stadiums, have a performance license. Recorded music is subject to license fees as well. The three US-based PROs — ASCAP, BMI, and SESAC — collect the fees and distribute them to their members.

With the music industry in steep decline, PROs are ramping up their pursuit of the little guys, who acknowledge that songwriters are entitled to compensation but are angry and frustrated at what they see as unfair targeting of small businesses and nonprofits that make no money from the music they present.

Among them is Magret Gudmundsson, who until recently hosted a monthly acoustic open mike in her Middleborough cafe, Coffee Milano. “I like having it here, but we’re not making any money from it and they wanted $332 a year,’’ Gudmundsson said. “The town really needs something like this. They ruined it.’’

Performance license fees are calculated based on a variety of factors: a venue size and seating capacity, the number of musicians who perform there, and the number of live performances per week, among others. The average fee for a small coffeehouse would be $200 to $400. But owners could be required to buy licenses from all three PROs.

The PROs have been criticized for years for their aggressive stance; in the mid-1990s ASCAP bowed to public outcry after attempting to collect licensing fees from the Girl Scouts for singing campfire songs. (They now charge the scouts a symbolic $1 a year.) But Vincent Candilora, ASCAP’s senior vice president for licensing, has no sympathy for Gudmundsson and her ilk.

“They’re selling coffee for four dollars and they can’t afford a dollar a day for music? If they don’t think it’s worth it, that’s their choice,’’ Candilora said. “But I have to say that most people recognize that music is a value to their business. Every now and then we run into people that think, ‘I’m just a small little bar; they’re not going to sue me,’ and that’s a mistake. Frankly, once you’re on our radar we can’t let you go.’’

ASCAP files between 250 and 300 copyright infringement lawsuits a year. BMI files 100 to 200 annually, and it’s always a last resort, according to spokesman Jerry Bailey, often following years of attempts to enforce compliance with the law. BMI is currently suing the owner of a saloon in Rochester, N.H., that the company has been trying to license since 2003.

Fewer than 10 percent of copyright infringement suits go to trial, because, he said, “once a business owner gets an attorney, they find out they don’t have a prayer of winning.’’ Penalties in court range from $750 to $30,000 per song, and are determined by a federal judge.

Bailey said he understands how difficult it is for small business owners to survive. “But are they going to the electric company and saying, ‘Times are tough; can we get some free service?’ ’’ The number of lawsuits is on the rise, in large part because of technology. Not only do sites such as Facebook, Citysearch, and Yelp make it easier to spot potential violators, but sophisticated software simplifies the process of identifying music at its source, and determining whether it falls under copyright protection.

BMI owns the technology many cellphone users know as Shazam, a mobile app that identifies songs (the other PROs have their own version). Regional licensing agents use the app during anonymous visits to venues.

And that, said Howie Newman, a Massachusetts musician who has lost work on the local coffeehouse circuit because of all the canceled music programs, is cause for concern.

“The song ‘Happy Birthday’ is covered by copyright. Where do you draw the line?’’ said Newman, who also runs the Music in Melrose coffeehouse at Church of the Nazarene, which features monthly performances between September and May. “We couldn’t afford a thousand dollars a year [the price for licenses with all three PROs]. We don’t gross that for the whole season. There needs to be some kind of amendment to the law where venues of a certain size or which generate a certain amount of revenue are exempt or have a small fee.’’

To that end Louis Meyers, the executive director of Nashville-based Folk Alliance, is negotiating with the PROs to formalize a license waiver for nonprofits, nontraditional venues, and coffeehouses with a capacity of 50 or fewer. But he said talks are progressing slowly. “There’s been such an incredible shrinkage in their revenue streams, because sales of music are down across the board, that all of a sudden they’re much hungrier and less willing to give up any money,’’ Meyers said. “Right now their collection people on the street are going after everyone.’’

That includes numerous people who declined to speak on the record for fear it would draw more attention from the PROs. One proprietor of a small restaurant in Western Massachusetts, who says he’s lucky if 25 people show up for live music on Tuesdays and Thursdays, has written letters to each of the PROs explaining that entertainers in his establishment play only originals and traditional folk songs, which aren’t protected by copyright.

“They wrote back and said, ‘I don’t believe you,’ ’’ he said. “They say that the problem is I don’t know every song that’s been written and someone could throw in a song that I’ve never heard. How do I get around that? Buy a license that covers everything.’’

Most coffeehouses would be eligible for the minimum fee of $200 to $400. But even that is roughly a quarter of the profits one South Shore summer music series, at a rural education center, brings in during an entire season of concerts.

“I think the artists should be paid something for their work, but at the same time you shouldn’t be hitting these coffeehouses that are volunteer-driven and lucky to be breaking even,’’ said the center’s executive director, who has been presenting music for 15 years and began getting letters from ASCAP a year ago. “It really feels like extortion.’’