A spirited Griffin brings gospel to House of Blues 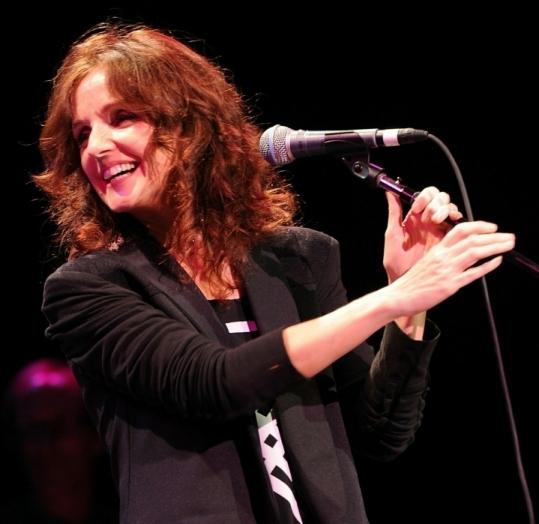 For someone who considers herself a lapsed Catholic, Patty Griffin certainly has no trouble singing like an angel — albeit one who can sometimes sound a little bruised, burdened, or even ready to shrug off her wings so she can sneak to the bar for a whiskey and a cigarette.

Sunday night at the House of Blues, with the help of an appropriately heavenly band, the former Bostonian got her gospel on in an uplifting 105-minute show that seamlessly intertwined the sacred and the secular.

Touring in support of her latest album, “Downtown Church,’’ a genial Griffin oscillated between traditional numbers imbued with swampy grit by her five-man band (like “Wade in the Water’’), well-chosen covers (including Hank Williams’s heart-rending “House of Gold’’), and more ethereal originals that located the divine in the turn of a phrase or trill of a note, as did “Little Fire.’’

As is her wont, Griffin roamed the roots music landscape from classic folk to Southern rock to gutbucket country, eschewing for the evening any of her stuff that might be labeled pop. One of the night’s most poignant numbers was Griffin’s version of Waylon Jennings’s “I Do Believe,’’ a finely honed acoustic ballad about a not so finely honed, yet bedrock consistent, sense of faith. The most comic moment arrived with a bawdy new waltz, “Get Ready Marie,’’ dedicated to her grandparents.

A pleasant surprise came in the form of Shawn Colvin, who flew into town just in time to stroll onstage and add honeyed harmony vocals to Griffin’s classic “Mary’’ as well as the night-capping jamboree “We Shall All Be Reunited.’’

Griffin friend and producer, singer-songwriter Buddy Miller served in her band as guitarist and she repaid that kindness by singing harmony during the lion’s share of his dynamite opening set, which included a romp through the combustible “Gasoline and Matches,’’ featuring Miller’s young nephew on drums.

At: House of Blues, Sunday