A wide spectrum of folk 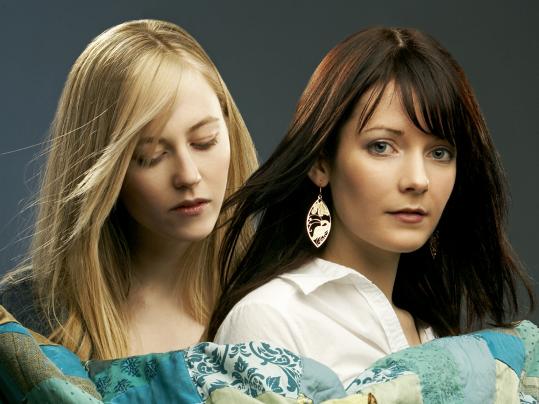 But two crucial threads bind them together. First, they all fit under the vast canopy of modern folk music, which isn’t surprising, since the country’s only full-time folk station, WUMB-FM (91.9), is producing the festival. Second, it’s unlikely that any of these careers could exist without public stations like WUMB.

As Lovin’ Spoonful founder and leading light of the ’70s songwriter movement, Sebastian has had lots of mainstream airplay. But recent rootsy forays with his jug band, and an acclaimed collaboration with Dawg-grass icon David Grisman, were heard almost exclusively on public radio.

“To our style, it’s almost the only avenue today,’’ he says. “It’s like pulling teeth to get anything like it on commercial radio, or even a late-night talk show.’’

Dala is a duo of high school best friends Amanda Walther and Sheila Carabine. Now in their mid-20s, they are darlings of the Canadian music scene and stars of an upcoming PBS special, “Girls From the North Country.’’ Their pop-smart songwriting is infectiously melodic, veering from Joni-Mitchell-esque emotional landscapes to the carefree soda-pop rock of the Everly Brothers.

For modern folk acts like Dala, careers are built venue by venue, fan by fan. So public radio is where they most want to be heard.

“Public radio attracts exactly the listeners we want,’’ says Carabine. “They’re critical, active, the kind of people who write down the names of acts they like, go online to get the CD, and come out to the shows. They vote with their feet.’’

Key to that nurturing sensibility is that most noncommercial DJs are willing to play new and lesser-known artists. Brendan Hogan was host of WGBH-FM’s beloved late-night blues program, before the public radio giant joined a growing list of public stations that have dropped folk music for news programming. Performing at the festival Sunday, Hogan is a beguiling bluesman, but equally deft with haunting, Dylanesque balladry.

“Nothing beats an informed, enthusiastic, music-loving disc jockey,’’ he says. “The freedom you have in public radio to play a CD from an unknown, simply because you think listeners will enjoy it, is so important. Where does the next great music come from, if it has to already be successful before it gets on the air, the way it is in commercial radio? Where does that music go to become successful?’’

Les Sampou was a popular folk headliner in the ’90s, then left music to start a family. She’s roaring back with her best CD, a sinewy, blues-rocking delight called “Lonesomeville.’’

“WUMB has been extremely important to the music scene around here,’’ she says. “They’re like a crusader, with a long philosophy of supporting independent music. They’ve had to struggle so much to survive; and that puts them on the same playing field as the artists. We all know the feeling of doing something you love for free. It’s like we’re all equal; they’re not like the man behind the desk with the cigar, deciding who’s going to get heard. They do their very best to give everybody a chance.’’

In an age of “narrow-casting’’ and target-marketing, WUMB has an active playlist of more than 6,600 songs. And that commitment to all things folk is paying off. The station just got its highest-ever ratings, and listener support is back to pre-recession levels. Station manager Patricia Monteith credits adding lots of what she calls “comfort songs’’ to the format, familiar classics by the likes of James Taylor, the Byrds, and Emmylou Harris, amid the familiar blend of new songwriters and trad bands, local favorites, bluegrass, Celtic, Americana, and other roots styles.

Asked what would happen to American music if public radio continues its retreat from music programming, Sebastian groans loudly, as if somebody punched him in the gut. “Well,’’ he says, “then we lose the big menu. We go to the lunch menu, this really compact 20-, 30-song affair. That’s the strong suit for having these noncommercial stations that can be wildly eclectic, whipping you around stylistically, so that everybody gets a little taste of everything on the big menu.’’