Gauthier comes to terms with a lifelong journey of questions 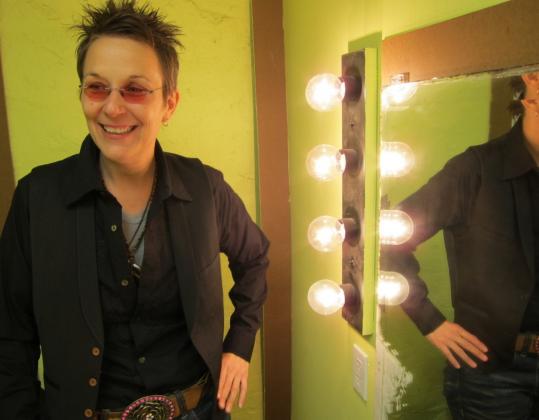 Mary Gauthier backstage at the Somerville Theatre in April. Her new album, "The Foundling," chronicles her life as an orphan. "The record started really in my head when I walked through the door of the orphanage," she says. (James Reed / Globe Staff)
By James Reed Globe Staff / May 23, 2010

There’s a simple couplet on Mary Gauthier’s new record that you almost miss and certainly won’t appreciate without knowing the story behind it.

“I don’t know if she ever held me/ All I know is that she let go of me,’’ Gauthier sings, her voice elongating “go’’ like a wounded dog’s howl.

When you understand what inspired “Goodbye,’’ the shuffling country song sucker punches you in the stomach. It’s from “The Foundling,’’ Gauthier’s stunning new concept album about her experiences as an orphan, from when she was born and put into a New Orleans orphanage to the heartbreaking day, at age 45, she finally confronted her birth mother.

“I think I’m supposed to have written this,’’ says Gauthier, a former longtime Boston resident who lives in Nashville now. “The record started really in my head when I walked through the door of the orphanage.’’

That moment unearthed all sorts of psychological layers Gauthier hadn’t been able to process, baggage that had carried over into adulthood and affected her ability to have lasting relationships. Gauthier, who performs at Club Passim on June 15, realized she needed to know more about her story.

She eventually found her mother through a private detective, but things didn’t go quite as expected. Gauthier had instructed the private detective to give her mother Gauthier’s phone number and website. But the mother never called; six months went by. Finally, a week before Christmas, Gauthier mustered the strength to make that call cold, only after circling the phone for three hours before deciding her strategy: She would thank her mother — who was unwed when she gave birth to Gauthier but later got married and had two other children — for her sacrifice.

“That’s what gave me the courage,’’ Gauthier says. “I called her and I said, ‘This is Mary,’ and she said, ‘Who?’ And then I realized that she didn’t go to my website. She didn’t internalize any of it.’’

It did not dawn on Gauthier’s mother who was calling until Gauthier said simply: March 11, 1962. “Bam. She starts crying.’’

That’s the day Gauthier was born, and it’s also the title of the new album’s most gut-wrenching song. Her spoken-word delivery conveys a sense of eavesdropping as Gauthier reenacts her side of the first (and only) conversation she had with her mother.

Using “Red Headed Stranger,’’ Willie Nelson’s 1975 concept album, as her blueprint, Gauthier gave “The Foundling’’ a narrative and chronological arc faithful to her own journey. The songs are sometimes heavy and fraught with questions, but they’re often just as redemptive and hopeful.

Michael Timmins, of Cowboy Junkies, produced “The Foundling’’ and wanted to keep it grounded in Gauthier’s hybrid of closing-time country and rootsy folk while adding some ambient touches. (On a side note, he says, the subject matter especially resonated with him since he’s the father of two adopted children.)

“I had seen her live a few times, and I knew that as a solo performer she’s extremely powerful,’’ Timmins says. “I felt like to get these songs across, we really wanted to capture performances and not labor too much on getting everything perfect. I wanted the whole session to have an intimate feel.’’

Gauthier says her mother doesn’t know about this album, not that it would even matter. “I don’t think it’s about her,’’ she says. “She was certainly the spark, but I think it’s more about adoption and birth mothers and what this means to both parties. She’s not prepared to fully embrace the significance of what I’m trying to do with this album.’’

Remarkably, “The Foundling’’ never judges or blames the mother. If anything, Gauthier is now at peace — or at least closer to it — with how her life has unfolded.

“What I’ve found at 48 years old is that there’s nothing about me that’s unique,’’ Gauthier says. “There’s a universal inside of me. So if I tell my story, you’re going to see parts of your story in it. I don’t know which parts, but we all overlap. We’re all very much alike.’’