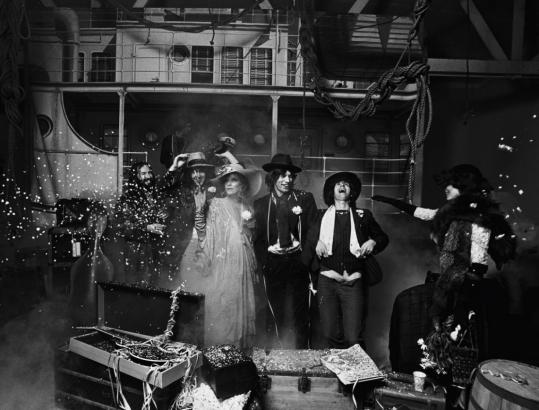 A publicity shot for “Exile on Main Street,’’ which got mixed reviews upon its release in 1972. (Norman Seeff)
By Jonathan Perry Globe Correspondent / May 16, 2010

“This is at once the worst studio album the Stones have ever made, and the most maddeningly inconsistent and strangely depressing release of their career.’’

“It’s a bit overrated, to be honest. I’m not saying it’s not good. Compared to ‘Let It Bleed’ and ‘Beggars Banquet,’ which I think are more of a piece, I don’t see it’s as thematic as the other two. It’s got a raw quality, but I don’t think all around it’s as good.’’

Let’s get this out of the way: “Exile on Main Street’’ is not the best Rolling Stones album. But it may well be their most important. For cohesion and expertly executed songcraft, my vote would go to Jagger’s choices or to my favorite, 1971’s “Sticky Fingers.’’ But “Exile’’ is easily the most talked-about, obsessed-over, mythologized work of the band’s nearly 50-year career.

Many Stones reissues have hit the market over the years, often shrewdly timed to a new tour or technology. But none has matched the anticipation and nostalgia stoked by this Tuesday’s deluxe re-release treatment of “Exile,’’ which will include 10 previously unreleased tracks as well as reworked “Exile’’-era songs. For several generations of fans and critics (most of whom have radically revised their initial assessments of the album), the Stones’ 1972 opus remains the band’s definitive, enduring statement.

But why “Exile?’’ Was it the band’s stew of R&B-marinated rock (“All Down The Line’’), back-porch country (“Sweet Virginia’’), Saturday night blues (“Stop Breaking Down’’), and Sunday morning gospel (“Just Wanna See His Face’’)?

Was it photographer Robert Frank’s iconic black & white cover art depicting a melange of carnival freak-show images mixed in with grainy film stills of the Stones hanging out on the streets of Los Angeles and New York? Was it the bleary, just-woke-up-or-never-went-to-bed quality of music that suggested a rolling, tumbling house party in sprawling slow motion?

Or was it the toxic aura of decadent glamour that hung over the whole affair, one littered with hangovers and hangers-on? The debauched rock-star mystique, personified in a single inside-sleeve photograph of Mick and Keith leaning like blood brothers into one overhead microphone, singing as they clutch their liquid libations? It’s classic Stones iconography — a snapshot of inspiration from deep inside the woozy womb of what one imagines to be an endless bacchanalian bash.

Yes, yes, and yes. Never mind that, upon its release in May 1972, “Exile’’ received mixed reviews, or that Jagger has long refuted it as the Stones’ masterpiece, or that the seedy basement where much of it was recorded was actually situated in Keith’s sumptuous villa in the south of France.

“Exile’’ is a sweeping distillation of the Stones’ sybaritic strengths and a consolidation of all of the band’s musical influences, aspirations, and debts. For the first time, instead of being young European outsiders earnestly paying tribute to the older blues musicians they had idolized, the band sounds fully immersed, totally inside of the music, a part of it rather than a pose. As a result, “Exile’’ is the most authentically American music the British-born Stones ever made. When people talk about that signature Stones “sound,’’ this is the era and album they are referring to, trying to emulate (e.g. Wilco’s “Being There’’), or even respond to (Liz Phair’s “Exile in Guyville’’).

Generational spell
Like many others who were born in, rather than defined by, the decade that birthed the likes of the Stones, the Beatles, Bob Dylan, and the Who, I fell under the spell of “Exile’’ many years after it was first released. It wasn’t my first Rolling Stones album, but to my teenage ears it felt and sounded like the most adventurous, inscrutable, grown-up music I had ever heard. Its gritty, world-weary disposition was, I imagined, the soundtrack to a life experience that was the polar opposite of my shy, sheltered existence growing up in a tiny rural town in Western Massachusetts.

It was also a bracing tonic to the corporate claptrap clogging mainstream radio at the time — homogenous drivel like Styx and Asia and, the worst offenders, Loverboy — that to me were emotionally and musically soulless. Only later would I be initiated into the thriving punk and nascent alternative rock that was, at the time, bubbling up from the underground.

From the moment I lowered the needle on my cheap Zenith Allegro stereo onto “Rocks Off,’’ the boisterous opening track, and sat down on my shag-carpeted bedroom floor, positioned squarely in front of those bulky speakers, “Exile’’ hit me like a locomotive. I threw myself headlong into the vinyl grooves and lived there for weeks. The four sides of that double-LP would eventually send me backtracking, scrambling to answer Mick’s query on “Hip Shake’’: “Whaddya know ’bout Slim Harpo?’’

Decades later, I’m still discovering how long “Main Street’’ runs, how deep into the country it goes, and how many twisting detours — peaks and valleys of rhythm and groove — there are along the way. Ultimately that’s also the true, enigmatic power of “Exile’’: its emphasis on conjuring moods, riffs, and atmosphere, rather than dispensing radio-ready rock ’n’ roll songs. Even the album’s first single, “Tumbling Dice,’’ sways more than it stings.

Like Dylan’s “Blonde on Blonde,’’ another double album of some repute, “Exile on Main Street’’ is bedrock music that is at once a product of its special time and place, and a living, breathing work that transcends those specifics.

“What a beautiful buzz, what a beautiful buzz,’’ Jagger observes on “Loving Cup,’’ a line about fleeting contentment delivered with a measure of wonder and — for Jagger — rare sincerity. But there’s a sense of fretful urgency too, a doomed desire to capture and document the nocturnal moment before it vanishes with the dawn. Who knew the buzz, still beautiful, would last another 38 years?