Bringing bands to the front 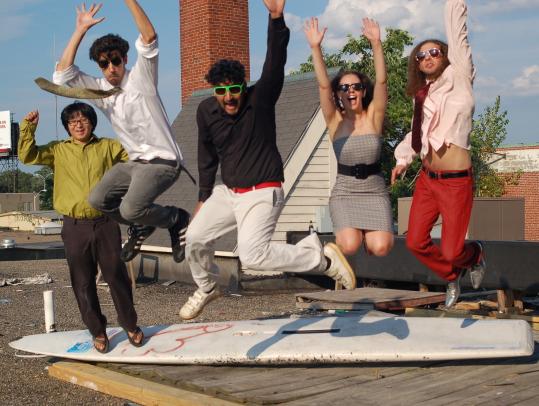 Streight Angular will play the House of Blues tonight, part of a series of free shows that feature local acts in the venue’s 150-capacity front room five nights a week.
By Jonathan Perry Globe Correspondent / May 14, 2010

Josh Allain’s future came to him in a dream. It was around the time the Fall River resident was working at a neighborhood bar, breaking up fights between girls and getting between a lot of pulled hair. In the dream, Allain was attending the Berklee College of Music, taking synthesizer classes because he loved electronic music. It was nice. Then he woke up.

“I just wanted to do music and artistic things,’’ recalls Allain, 31. “That wasn’t the life I wanted. So I went to the station, got on a bus, and went to my one friend in Boston’s house. It turns out his friend was going to California and needed somebody to take over his lease for two months. Seven years later, here I am.’’

Within two months, Allain was working pretty much every job at the old House of Blues in Harvard Square, and when that shut down he moved over to the Paradise Rock Club. He did a little of everything there too, including book the lounge’s live Sunday night programming.

Now Allain’s back at the rebooted House of Blues on Lansdowne Street, where he has just launched a local music series, booking an eclectic roster of Boston-area acts into the club’s 150-capacity front room five nights a week. The shows are free, and strategically timed to catch the ear and eye of audiences on their way out of just-completed big shows in the main room.

On a bustling street that provides plenty of night life entertainment options, local music has rarely been one of them — until now.

“People don’t expect to hear good original music on Lansdowne Street,’’ says Allain, who plays drums for the Allston art-punk outfit the High Seas. “I don’t know when the last time that happened — Bill’s Bar [now closed] was never a really consis tent thing. Maybe it’s not the most profitable thing, but trying to reconnect on a local level and say [House of Blues] cares about local music, I think, is important.’’

Besides, Allain muses, if the idea works, it could have a positive ripple effect.

“It exposes a lot of really good bands to people that might not necessarily go out and pay money to see those bands, because they don’t know who those bands are,’’ says Allain, sitting in the club after a show in the main room. “But they’re coming out of the music hall and they’ve had a couple of drinks, and they go, Free music over here? Let’s check it out. And the next thing they know, they’re seeing a band that maybe they’ve never seen before. And that band has some new fans, and maybe that person checks out other bands that are friends with that band.’’

Downstairs in the front room, under the stage lights, the Cambridge garage-psych duo Drug Rug are in the middle of their two-hour set. It’s their second night in a row here, and they’ve brought in a small but loud crowd. This might be one of the last places you’d expect to see Drug Rug perform — singer-guitarist Sarah Cronin coaxing a squall of feedback from her amplifier, while drummer Tommy Allen smacks a cymbal, directly under the HOB corporate logo. But the noise sounds good, and a few folks at the bar linger to look.

“I think the [House of Blues] shows could be pretty sweet,’’ Allen remarks by e-mail a few days later. Treating bands and their fans right, Allen writes, is crucial to making the idea work: “Bands talk! We find out if a place treats them lousy and we stay away from them. Fans talk! Everyone loves a free show. If they can come up with a cheaper beer option that would be key to making the local music nights successful. That’s a huge step. . . . As far as booking good shows, that’s obviously important. I think Josh is doing a great job so far.’’

Allain says he is working on bringing cheaper beer to the room, and trying to make it desirable for local bands. Right now, he says, the house is providing artists paid guarantees. “I want to take care of the bands first and foremost,’’ Allain says. “We pay bands a small amount, but they know they’re getting something, they all get fed, and they all get a couple of drinks. In return, we ask that they promote the show. We’ll see how it goes. How long it’s going to take before we start getting people coming every night, I’m not sure. All I can do is keep booking good music. I love challenges, and this is a big challenge.’’

STREIGHT ANGULAR With Dadfight! and Beach Hair, tonight at 9 at the House of Blues front room. The Tin Thistles, with Pray for Polanski and Children of the Night, play tomorrow at 9. Free. 21+. www.houseofblues.com