NEW YORK — Lena Horne, who was the first black performer to be signed to a long-term contract by a major Hollywood studio and who went on to achieve international fame as a singer, died last night at New York-Presbyterian/Weill Cornell hospital in New York. She was 92 and lived in Manhattan.

Her death was announced by her son-in-law, Kevin Buckley.

Ms. Horne might have become a major movie star, but she was born 50 years too early, and languished at MGM in the 1940s because of the color of her skin, although she was so light-skinned that when she was a child, other black children had taunted her, accusing her of having a “white daddy.’’

Ms. Horne was stuffed into one “all-star’’ musical after another — “Thousands Cheer’’ (1943), “Broadway Rhythm’’ (1944), “Two Girls and a Sailor’’ (1944), “Ziegfeld Follies’’ (1946), “Words and Music’’ (1948) — to sing a song or two that could easily be snipped from the movie when it played in the South, where the idea of an African-American performer in anything but a subservient role in a movie with an otherwise all-white cast was unthinkable.

Ms. Horne’s first MGM movie was “Panama Hattie’’ (1942), in which she sang Cole Porter’s “Just One of Those Things.’’ Writing about that film years later, Pauline Kael called it “a sad disappointment, though Lena Horne is ravishing and when she sings you can forget the rest of the picture.’’

In 1945 the critic and screenwriter Frank Nugent wrote in Liberty magazine that Ms. Horne was “the nation’s top Negro entertainer.’’ In addition to her MGM salary of $1,000 a week, she was earning $1,500 for every radio appearance and $6,500 a week when she played nightclubs. She was also popular with servicemen, white and black, during World War II, appearing more than a dozen times on the Army radio program “Command Performance.’’

“The whole thing that made me a star was the war,’’ Ms. Horne said in the 1990 interview. “Of course the black guys couldn’t put Betty Grable’s picture in their footlockers. But they could put mine.’’

Touring Army camps for the USO, Ms. Horne was outspoken in her criticism of the way black soldiers were treated. “So the USO got mad,’’ she recalled. “And they said, ‘You’re not going to be allowed to go anyplace anymore under our auspices.’ So from then on I was labeled a bad little Red girl.’’

Ms. Horne later claimed that for this and other reasons, including her friendship with leftists like Paul Robeson and W.E.B. DuBois, she was blacklisted and “unable to do films or television for the next seven years’’ after her tenure with MGM ended in 1950.

This was not quite true: As James Gavin has documented in his biography “Stormy Weather,’’ she appeared frequently on “Your Show of Shows’’ and other television shows in the 1950s, and in fact “found more acceptance’’ on television “than almost any other black performer.’’ And Gavin and others have suggested that there were other factors, in addition to politics or race, involved in her lack of film work.

Although absent from the screen, she found success in nightclubs and on records. “Lena Horne at the Waldorf-Astoria,’’ recorded during a well-received eight-week run in 1957, reached the Top 10 and became the best-selling album by a female singer in RCA Victor’s history.

In the early 1960s Ms. Horne, always outspoken on the subject of civil rights, became increasingly active, participating in numerous marches and protests.

In 1969, she returned briefly to films, playing the love interest of a white actor, Richard Widmark, in “Death of a Gunfighter.’’

She was to act in only one other movie: In 1978 she played Glinda the Good Witch in “The Wiz,’’ the film version of the all-black Broadway musical based on “The Wizard of Oz.’’ But she never stopped singing. She continued to record prolifically well into the 1990s, for RCA and other labels, notably United Artists and Blue Note. And she conquered Broadway in 1981 with a one-woman show, “Lena Horne: The Lady and Her Music,’’ which ran for 14 months and won rave reviews and a Tony Award.

Ms. Horne’s voice was not particularly powerful, but it was extremely expressive. She reached her listeners emotionally by acting as well as singing the romantic standards like “The Man I Love’’ and “Moon River’’ that dominated her repertory. The person she always credited as her main influence was not another singer but a pianist and composer, Duke Ellington’s longtime associate Billy Strayhorn.

Strayhorn was also, she said, “the only man I ever loved,’’ but Strayhorn was openly gay, and their close friendship never became a romance.

Lena Calhoun Horne was born in Brooklyn on June 30, 1917. All four of her grandparents were industrious members of Brooklyn’s black middle class. Her paternal grandparents, Edwin and Cora Horne, were early members of the National Association for the Advancement of Colored People, and in October 1919, at the age of 2, Lena was the cover girl for the organization’s monthly bulletin.

By then the marriage of her parents, Edna and Teddy Horne, was in trouble. Ms. Horne was raised by her paternal grandparents until her mother took her back four years later.

When she was 16, her mother pulled her out of school to audition for the dance chorus at the Cotton Club, the famous Harlem nightclub where the customers were white, the barely dressed dancers were light-skinned blacks, Duke Ellington was the star of the show, and the proprietors were gangsters. A year after joining the Cotton Club chorus she made her Broadway debut, performing a voodoo dance in the short-lived show “Dance With Your Gods’’ in 1934.

At 19, Ms. Horne married the first man she had ever dated, 28-year-old Louis Jones, and became a conventional middle-class Pittsburgh wife. Her daughter Gail was born in 1937 and a son, Teddy, in 1940. The marriage ended soon afterward. Horne kept Gail, but Jones refused to give up Teddy.

She had been singing at a Manhattan nightclub when the impresario Felix Young chose her to star at the Trocadero, a nightclub he was planning to open in Hollywood in the fall of 1941

Since blacks were not allowed to live in Hollywood, “Felix Young, a white man, signed for the house as if he was going to rent it,’’ Ms. Horne said. “When the neighbors found out, Humphrey Bogart, who lived right across the street from me, raised hell with them for passing around a petition to get rid of me.’’ Bogart, she said, “sent word over to the house that if anybody bothered me, please let him know.’’

Roger Edens, the composer and musical arranger who had been Judy Garland’s chief protector at MGM, had heard Ms. Horne sing at Cafe Society and also went to hear her at the Little Troc. He insisted that Arthur Freed, the producer of MGM’s lavish musicals, listen to Horne sing. Then Freed insisted that Louis B. Mayer, who ran the studio, hear her, too. He did, and soon she had signed a seven-year contract with MGM. The NAACP celebrated that contract as a weapon in its war to get better movie roles for black performers. 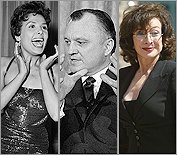