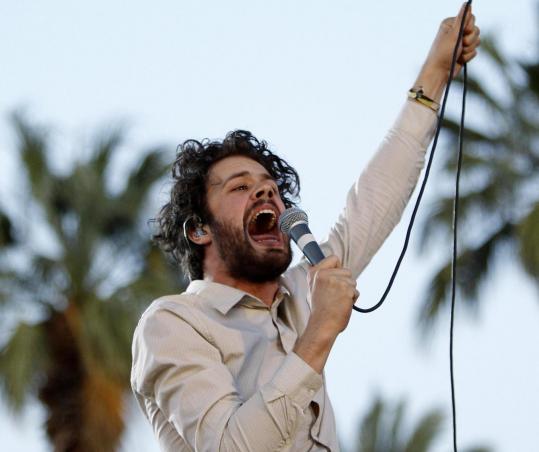 OK Go’s “WTF?’’ kicks off with a sludgy punk-guitar line, but the strangely seductive intonations from Damian Kulash are more Earth Wind & Fire than Johnny Rotten. When Dougie Mandagi opens his mouth on the Temper Trap’s “Sweet Disposition,’’ his skyward vocals take the listener by surprise, piercing all that anthemic reverb. On Passion Pit’s “Little Secrets,’’ the thing more arresting than the song’s insidious synth riff is Michael Angelakos’s joyous shriek-singing.

The falsetto has long occupied a precarious position in popular music. Hitting the high notes is par for the course in the realms of soul (Curtis Mayfield), dance-pop (Mika), and glam-rock (Freddie Mercury). Yet in the macho-minded indie world, the technique has traditionally been shunned. Singers like Radiohead’s Thom Yorke or the Flaming Lips’ Wayne Coyne occasionally reach for an upper register, but few hipster-approved rock outfits have dared make falsetto a big component of their act.

This aversion is due not only to the vocal skills required but also to the social repercussions: Singing in a range usually reserved for the fairer sex inevitably prompts derisive jokes about homosexuality and/or emasculation. Case in point: the long-running “Saturday Night Live’’ sketch featuring Jimmy Fallon as Bee Gees singer Barry Gibb.

Given such perceptions, it’s surprising to see the recent spate of falsetto-wielding bands on the indie circuit. Whether it’s the electro-tinged screeching of Passion Pit, the high-pitched freak-folk of Wild Beasts, or the Prince-ified tunes of OK Go (who play the House of Blues on Friday), the indie-rock falsetto is reaching greater heights than ever.

For singers like Sigur Rós’ Jónsi Birgisson, the mode conveys a majestic, almost otherworldly euphoria. Muse’s Matt Bellamy gives the sound a decidedly campier feel, stretching for the high notes in a show-offy bit of Mariah Carey theatrics. TV on the Radio’s Kyp Malone tends to shift into the higher register for the group’s funk-and soul-inflected numbers.

Whatever the purpose, falsetto is increasingly infiltrating an indie culture accustomed to a midrange nonchalance channeled by everyone from the Pixies’ Frank Black to the Strokes’ Julian Casablancas. “[The falsetto] is kind of like a high-wire act without a net,’’ says Didi Stewart, an associate professor of voice at Berklee who is teaching a class in pop-rock vocals this semester. “There’s something provocative and heart wrenching about that high male voice.’’

As far back as the 16th century, the falsetto has figured in genres ranging from opera to the Mbube music of South Africa. It has been employed in rock since the harmonies of the Beach Boys, though less frequently as a main melody line. In the ’80s, bands like R.E.M. and the Cure enjoyed flirtations with falsetto, but few groups tried embracing it wholeheartedly.

There’s no consensus as to who or what prompted this generation’s growing fascination with the sound. OK Go’s Damian Kulash points to punk outfits like Shudder to Think for inspiring his own singing.

“I remember listening to them and realizing how much I loved the strange, alluring contrast between those beautiful high notes and the aggressive music around them,’’ he says.

Coldplay’s Chris Martin and Wild Beasts’ Hayden Thorpe, meanwhile, have both mentioned singer-songwriter Jeff Buckley’s angelic vocals as an important influence. (Thom Yorke, himself a pivotal figure in rock falsetto’s evolution, has said that it was Buckley’s “Grace’’ that spurred him to explore the practice in more depth.)

At its core, falsetto counteracts much conventional wisdom about what a rock frontman is supposed to sound like. Coming from the Italian word for “false,’’ the falsetto is an inherently unnatural technique for men, who, unable to span more than a few octaves with normal chest voices, instead sing notes out of their heads, using the edges of their vocal cords (hence, the term “head voice’’).

“It’s an overtly artificial voice that has to be cultivated and honed,’’ says Philip Auslander, a professor of media studies at Georgia Tech and author of “Performing Glam Rock: Gender and Theatricality in Popular Music.’’ “That deliberateness could be considered antithetical to the traditional notion of authenticity in rock.’’

In many ways, the falsetto’s emergence reflects an increasing acceptance of a softer masculinity in today’s indie artists. That upper register inevitably imparts a sense of vulnerability and fragility that one might not immediately associate with a genre largely defined by its cocksure, cooler-than-thou detachment. The morose break-up songs on Bon Iver’s “For Emma, Forever Ago’’ are emotionally charged, but not by Justin Vernon’s words so much as by his thin, chilling, cracked falsetto.

At the same time, the falsetto can serve as a subversive expression of rebellion. After all, in a music scene that relies on pushing the envelope and upending expectations, is there anything more defiantly rock ’n’ roll than a guy confident enough in his sexuality to belt out a high C?

“Singing in falsetto comes from a willingness to be unhinged and uninhibited, which I think is a kind of strength in itself,’’ says Thorpe. “There’s definitely a beautiful, sublime quality to hearing a voice like that.’’