Happily, prisoners in their own world 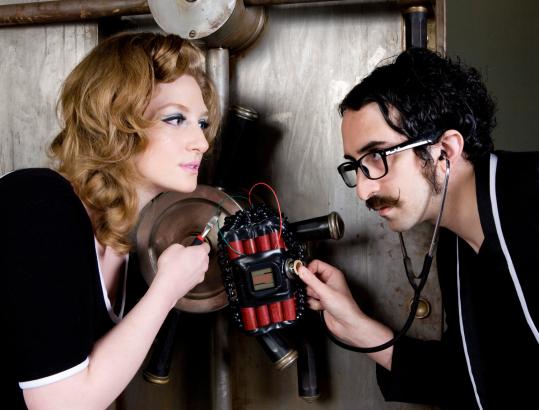 Songs on the new album by Sophia Cacciola and Michael Epstein are based on episodes of the British ’60s series “The Prisoner.’’ (Kelly Davidson)
By Jonathan Perry Globe Correspondent / April 2, 2010

CAMBRIDGE — With a name like Do Not Forsake Me Oh My Darling, the duo of Sophia Cacciola and Michael Epstein know they’ve likely damned themselves to a following even smaller than “The Prisoner,’’ the British ’60s cult series that inspired their name, and their band.

“It has a good ring to it, but people give us a hard time,’’ says singer-drummer Cacciola, laughing over coffee at a Central Square eatery with Epstein, the band’s extravagantly mustachioed bassist. He good-naturedly bemoans that the name — taken from an episode of the short-lived sci-fi series starring Patrick McGoohan — is, indeed, “bad for radio.’’

“But,’’ Cacciola says, brightening suddenly, “I tell people that it’s still shorter than [the name of the Texas-based band] . . . And You Will Know Us by the Trail of Dead!’’

In fact, the Somerville twosome’s musical attack — a fiercely churning alloy of voice, bass, and drums — is as spare as the group’s name is unwieldy, and bears little resemblance to John Barry’s spy scores or kitschy themes that marked television adventure of that era. If there is an overtly retro element to the music, it lies in Cacciola’s and Epstein’s noisy nod back toward the post-punk ’80s underground or the confrontational cacophony emblematic of the so-called Riot Grrrl movement of the early 1990s. The duo plays Church tomorrow night.

A onetime acoustic guitarist who turned to drums because hitting something hard and making a very loud noise “made sense to me,’’ Cacciola cites No Wave art rockers such as Diamanda Galás, Sonic Youth, and Nina Hagen as inspirations, along with her childhood idols Hole and L7.

“These are the strong women that I looked up to,’’ says Cacciola, 25. “So definitely they had their influence on me, and I’m working through that lens. We get the Riot Grrrl comparisons because I scream a lot. It’s not very popular music right now — it’s all glockenspiel and hand claps. But for me, I want some emotion and rawness.’’

All of which ideally suits the sonically serrated, emotionally scarred songs on Do Not Forsake Me Oh My Darling’s self-released debut EP, “The New Number 2.’’ As a whole, the songs deal with troubled states of mind — fear, paranoia, claustrophobia — and the distinct feeling that, yes, they are out to get you. In other words, the harrowing music that marks “The New Number 2’’ is in keeping with the premise of “The Prisoner’’: a former British secret agent held captive by unseen forces with an unknown agenda in a mysterious village.

Each track is named after a specific episode (save for a cathartically venomous cover of Leonard Cohen’s “First We Take Manhattan’’), with every song loosely based on each episode’s ambiguous, allegorical plot line (or some thematic aspect of them). But Cacciola, who intends to pen compositions representing each of 17 episodes of “The Prisoner,’’ claims the music came first.

“Before I even saw the show, I was writing about this weird little world that I kind of invented,’’ Cacciola says. “[Michael and I] watch a lot of British TV — we love ‘The Avengers’ and ‘The Saint’ — and so we watched ‘The Prisoner’ and our minds were totally blown by it. Here was this guy that I was thinking about, already existing. Everything was there — totalitarianism, a fight against society. The character was so fleshed out that I thought, ‘Why not just write about this?’ ’’

Fans of the 1967-68 series have already taken notice of Cacciola and Epstein’s homage — right down to the signature attire worn by McGoohan: black jackets with white trim, custom made by a friend of the band’s. The duo has been interviewed for British podcasts, talked up in blogs, and mentioned in sci-fi websites devoted to the show. There’s an annual “Prisoner’’ convention in Wales where the series was filmed, and the two are considering going. While Cacciola admits she’s “never been so dorky about something,’’ Epstein cheerfully shrugs his shoulders. “I used to go to sci-fi conventions,’’ he says, “so I’m at home.’’

Still, being obsessed with “The Prisoner’’ is not a prerequisite to understanding the inner turmoil of the songs. “It’s important for us that it’s not like a ‘Harry Potter’ band where, if you don’t know Harry Potter, you don’t really get it,’’ says Epstein. “It’s important to us that it stands on its own as music.’’ That said, he’s a huge fan of a show that broke new television ground.

“Without ‘The Prisoner,’ there wouldn’t have been ‘Twin Peaks,’ ‘X-Files,’ ‘Lost’ — any of those shows that explore surrealism and allegorical approaches to plot,’’ says Epstein, 33. “To me, it feels like ‘The Prisoner’ was the first to do that. When you watch other spy shows, they’re kind of cheesy, have a very basic plot, and there are terrible fight scenes. But [‘The Prisoner’] holds up.’’

“Plus, there’s no love interest,’’ adds Epstein, who also sings and plays guitar with his decidedly poppier indie-rock band, the Motion Sick. “Which is great, because you don’t have to write love songs.’’

DO NOT FORSAKE ME OH MY DARLING Plays an EP-release show Saturday at 8 p.m. at Church. Go to www.churchofboston .com for details.