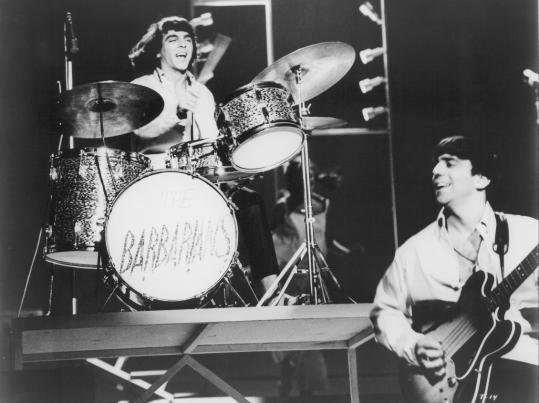 The concert’s lineup could not have been more star-studded, featuring a hit parade of the era’s marquee acts, from Chuck Berry and the Beach Boys to Marvin Gaye and the Rolling Stones. Piercing incessant screams from the audience, Lesley Gore ran through a string of bubble-gum anthems. And James Brown, the concert’s explosive showstopper, would later claim it was the moment white America finally discovered him.

But then something funny happened when the Supremes finished their set. The announcer suddenly intoned, “And now, all the way from their caves on old Cape Cod, the Barbarians!’’

If you’re of a certain vintage and grew up in New England, perhaps you remember the Barbarians, a short-lived garage-rock band out of Provincetown. They peaked at No. 55 on the charts with “Are You a Boy or Are You a Girl’’ in 1965 before disbanding three years later.

Otherwise, you have to wonder how such a fledgling band ended up immortalized in “The T.A.M.I. Show,’’ a concert film considered the first of the rock era. It’s a fabled document in the history of early rock ’n’ roll but one that has lived on mostly through word of mouth, high-profile fans like Sting and Quentin Tarantino, and subpar bootleg copies.

The show — “T.A.M.I.’’ was short for Teenage Awards Music International — was recorded in 1964 at the Santa Monica Civic Auditorium in front of an audience of largely white teenagers. Its prestige has grown over the years, yet somehow the film never made the leap to home release after its run in theaters.

That’s all the more reason to celebrate last week’s official DVD debut of “The T.A.M.I. Show’’ on Shout! Factory, which restores a long-lost classic with high-definition quality and reminds the world of Cape Cod’s first big shot at rock stardom.

“We had a song out called ‘Hey Little Bird,’ and it was moving, things were happening with it — it was heading toward the charts,’’ says Victor “Moulty’’ Moulton, the Barbarians’ drummer who now lives in Abington. “Our record label and managers got us on the show, and we thought we were great, so why not? We didn’t question it.’’

Steve Binder, who directed “The T.A.M.I. Show,’’ remembers it a little differently. “I would have to call them a house-band favor for [executive producer] Bill Sargent,’’ he says. “I think somebody told him, if this band hits, maybe you can be their manager.’’

Either way, the release of “The T.A.M.I. Show’’ has put the Barbarians back in the spotlight. It was the last thing Moulton, who’s 65 now and runs a cleaning company, expected after appearing in the film 46 years ago.

“We didn’t know the full effect of the show at the time,’’ he says. “We just knew it was really awesome and great to be part of it with the Stones and the Supremes. We didn’t know who the heck James Brown was. Then we saw him, and then we knew — oh, did we know.’’

While the other artists got four or five songs, the Barbarians are seen for just one, “Hey Little Bird,’’ but it was a solid performance, especially for a band that had been together for only four months at that point.

Besides, it was hard to take your eyes off the Barbarians, who looked like rebels compared to the other clean-cut performers. “We looked that way because I grew up on the sand dunes and beaches of Provincetown — a wild town in every category,’’ Moulton says. “I loved Johnny Weissmuller, who played Tarzan. He was my idol. He had this long hair, so that’s why I grew my hair long.’’

And then there was the curious sight of a 19-year-old drummer playing with a hook. Moulton lost part of his left arm in an accident at age 14. His hook is featured prominently in the film, but its director remembers some initial hesitance.

“I questioned whether or not I should have a close-up of it,’’ says Binder. “Nobody came to me and said anything, but I remember in my head thinking, ‘Should I be showing this in a movie?’ Here’s a guy playing his heart out on the drums, so why not? It’s part of his body. He was fantastic.’’

Even though “The T.A.M.I. Show’’ brought the Barbarians instant fame, it proved fleeting. Now the band is a footnote in the history of New England rock, but according to Moulton, that’s probably what the group deserves. “For what we did we got our due,’’ he says, “but remember we only had two charted hits.’’

He’s not a full-time rocker anymore, but occasionally Moulton plays with a new set of Barbarians. And with renewed interest courtesy of “The T.A.M.I. Show,’’ Moulton says there’s not much talk of the original lineup reuniting. Still, he’s intrigued by the prospect of releasing his own music again, and his bank account wouldn’t mind, either: “My royalties are so small now, I can’t even buy a cigar with them,’’ he says, only half in jest.

He’s not counting on “T.A.M.I.’’ to make him rich or famous. Besides, he’s moved on from those days. “After the music business I ended up in Boston and had to work for a living. I wasn’t going to go back to Provincetown and be a fisherman — even though I have a hook.’’

Speaking of the hook, does he still have it?

“I never got asked that question!’’ he says, laughing. “Of course I have it. I wear it every day. I can’t play the drums without it.’’