Another Levine absence takes its toll on the BSO 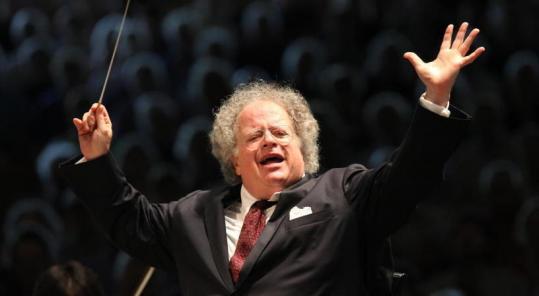 Tonight, the Boston Symphony Orchestra will present the world premiere of Peter Lieberson’s “Songs of Love and Sorrow,’’ a major commission that was to be conducted by BSO music director James Levine. Instead, the 31-year-old conductor Jayce Ogren will lead its first performance.

The BSO, in short, is without its captain once again.

Monday brought news that Levine will miss his remaining three weeks at Symphony Hall this season because of back problems that sidelined him for almost the entire fall. This is a particularly unfortunate stretch for another absence, as these next weeks include two of the season’s three world premieres and a large-scale Mendelssohn oratorio, all important programs for the orchestra. Technically competent conductors are always out there to fill in, but there is clearly no substitute for an actively engaged music director.

Levine’s manager, Ronald Wilford, told the Globe that the conductor is in “excruciating pain.’’ Levine will be working with doctors to figure out the next steps in his treatment. The city’s music fans surely wish him a full and speedy recovery, but their disappointment and sharp frustration about another leave have been palpable in online comments responding to the initial news report.

That announcement probably did not come as a complete surprise for those who had attended recent Levine performances in Symphony Hall. Since returning in January from his fall medical leave, the conductor, 66, looked physically taxed and uncomfortable in front of the orchestra, bracing himself every few bars with his left hand on the seat of his conducting chair. While he still managed to lead some very impressive performances, you had to wonder sometimes how he was making it through.

Cumulatively, his absences have been taking a toll. His prolonged leave in the fall for back surgery meant that Levine missed the BSO’s high-profile opening of the Carnegie Hall season, as well as his own major programming initiative, an intensive survey of all nine Beethoven Symphonies within a period of just over two weeks.

Of course, substitutes for the podium were found, ticket exchanges turned out to be minimal, and the concerts drew enthusiastic ovations. So one might wonder, were the consequences of that leave really so significant?

Yes. Baton interchangeability is a convenient myth. In the case of the fall Beethoven cycle, the focus and the artistic raison d’être of the project were lost. Rather than being led on a symphonic journey from a single, impassioned point of view, the audience was given a tasting menu of various interpretive approaches, some of them quite disappointing. And Levine’s stated hopes of using the cycle as a chance to deepen the orchestra’s relationship to these repertory staples were unrealized. The BSO had no chance to rehearse the full cycle of symphonies with its own music director.

For any orchestra, the leader comes to represent the collective image and aspirations of the institution as a whole. In this case, the orchestra also simply sounds different when Levine is there, independent of his particular interpretive ideas about a given work. After six seasons of working together, the musicians know the sound he is looking for in a given passage. They have developed a shared vocabulary, a way of striving to project textural subtleties, musical transparency, and a work’s broader structural architecture. The BSO is now, in other words, Levine’s orchestra.

On a more tangible level, while programs are officially subject to change and injuries are in the nature of sports and show business, potential concertgoers should not be made to feel they are taking a leap of faith before purchasing a costly ticket to a major BSO program. And even in cases when the box office remains solid, as with the Beethoven cycle substitutions, it can be extremely demoralizing for the players themselves to see the season’s keystone artistic projects outsourced to other conductors who happen to be available.

So what now? At the moment Levine is consulting with specialists and undergoing more tests. “It’s been a very challenging year and [Levine] is probably the most disappointed of all,’’ said Mark Volpe, the BSO’s managing director, in a phone interview. “Obviously everyone is concerned, first and foremost, for his physical well-being. Institutionally speaking, we need to know what Jim’s prognosis is and what the course of action is for his treatment. Before then, [any other discussions] are premature.’’

(On Tuesday, the orchestra clarified earlier explanations about how Levine is paid for his services. “Roughly less than a quarter’’ of his annual compensation, according to a BSO spokeswoman, is for his administrative work, separate from the concert fees, which he does not receive if he does not conduct. Levine is paid $1.7 million a year, the BSO’s most recent tax filing says.)

Compounding Levine’s health situation is that, given his post as music director of the Metropolitan Opera, he runs not one but two major musical institutions. Dual appointments are not uncommon in the field, but each round of Levine’s physical crises — including a torn rotator cuff in 2006 and a cancerous cyst on his kidney in 2008 — has naturally raised questions of whether he can sustain his commitments both here and in New York. His leave last fall meant several missed Met performances as well, though at the moment, his spring commitments with the Met (performances of “Tosca’’ and Berg’s “Lulu’’) are still on the books.

More broadly, at the BSO, nobody could mistake this season’s status quo as tenable. Hopefully the coming weeks will provide some relief for the conductor and clarity on next steps. Levine at his best remains a tremendous musical force and the BSO needs his active leadership. At the moment, you can feel the sense of drift.