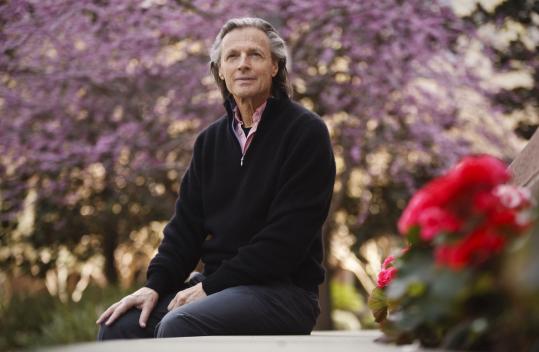 Peter Lieberson at M.D. Anderson Cancer Center in Houston, where he is being treated for the leukemia diagnosed following his late wife’s death. (Michael Stravato for The Boston Globe)
By David Weininger Globe Correspondent / March 19, 2010

Penned by poet Pablo Neruda and set to music in 2005 as the last of the “Neruda Songs,’’ the words became a foreshadowing of a tortuous journey for composer Peter Lieberson, taking him from the death by cancer of his acclaimed singer wife, to his own encounter with cancer, to a new life and love. All of which made their way into Lieberson’s new work “Songs of Love and Sorrow,’’ which receives its world premiere by the Boston Symphony Orchestra and baritone Gerald Finley on Thursday.

Like the earlier “Neruda Songs,’’ the new song cycle was commissioned by the BSO and is drawn from Neruda’s “Love Sonnets.’’ The texts range over joy, loneliness, the eternal wonder of love, and the fragility of human existence.

“What makes the human life so poignant is the recognition of its profound impermanence,’’ Lieberson says. “Everything, even our thoughts, our emotions — not just big events but little events. I think with that kind of recognition comes a great appreciation for what it means to be alive.’’

That poignancy was brought home with shattering force in July 2006, when Lorraine Hunt Lieberson, the composer’s second wife and one of the most astonishingly expressive singers in recent history, died of breast cancer. In the last year of her life she canceled many engagements; among those she fulfilled were several performances of “Neruda Songs.’’

Not long after her death, Lieberson himself was diagnosed with cancer: mantle cell lymphoma, a variant of non-Hodgkins. “I’m sure I had it when I was taking care of Lorraine,’’ he says. “But I simply didn’t pay attention to what happened to me. By the time I was diagnosed, and I did go to see a doctor here, I was very close to dying myself.’’

Speaking by phone from Houston, where he receives continuing treatment for the leukemia he now battles, Lieberson talks about these events with a certain reserve, an air that approaches tranquillity. At the time he had little will to compose. During the spring of 2007, between rounds of cancer treatment, he thought about writing a set of songs as a memorial for Hunt Lieberson. It would also, in some sense, be a farewell of his own. But, he says, “I just couldn’t deal with the subject matter.

“I mean, there was certainly a period when I thought I wouldn’t be able to work anymore. And I thought maybe if I did write this piece, it would be my last. I was that ill.’’

Months later, on a day when he received a transfusion of 5 million of his own stem cells, he learned that he had won the Grawemeyer Award, one of classical music composition’s most prestigious prizes, for “Neruda Songs.’’ He turned 61 the same day.

The most direct catalyst for his new work, though, came as something of a shock to Lieberson: He fell in love again. Rinchen Lhamo is a former Buddhist nun whom he met several years ago at the home of the pianist Peter Serkin, a mutual friend. Lieberson remembers it being “quite a wild night there. It was very boisterous, a lot of celebrating.’’

Not long after his lymphoma treatment ended, he received an e-mail from Lhamo: She had recently moved to Santa Fe, where Lieberson lives, and had heard about his illness. They reestablished their friendship and were married in December 2008.

When the word “fate’’ is offered to describe the chain of events, Lieberson chuckles softly. “It is like that. In fact, most of the things that have happened to me over the past 10 years seem to be somewhat like that.’’

When he felt ready to turn his attention back to the BSO commission, he no longer felt compelled to memorialize Hunt Lieberson or write his own farewell. “I lived longer than I thought I might. . . . So much had happened: [I] fell in love, remarried, saw my children [Lieberson has three daughters from his first marriage] get older. Those were particularly significant aspects of the years I had that I didn’t think I’d have. And then it occurred to me, I should really try to find poetry of Neruda’s love sonnets that encompasses many different things.’’

The five Neruda poems that Lieberson chose for “Songs of Love and Sorrow’’ are sensual, suggestive in their language. True to the cycle’s title, they touch on love and loss, often bound up inextricably with one another. It’s that commingling, he says, that makes Neruda’s poetry so appropriate to his purposes.

But he has no desire to be more specific about the references in any of the songs. “I think I would prefer not to characterize who I thought was being sung to or what was being evoked, because then it becomes too particularized and, actually, it’s not really true.’’

The music for the new cycle follows in the lyrical vein that characterized the “Neruda Songs,’’ which came as something of a surprise to those who knew his dense earlier works. Many hailed this “approachable’’ style, but Lieberson says it’s less a matter of being accessible than being “more naked — something that wants to come through and allowing it, whatever its form should be.’’

Finley says Lieberson’s “lyric voice is beautiful; he’s got a great sense of melody. It’s like all of these songs sound like they are already standard, part of the repertoire. They are extremely — I hate to use the word catchy — but there’s melody that’s instantly suited to the words and the mood of each poem.’’

Lieberson is not sure whether he’ll continue to compose in this style. “I might go in a completely different direction,’’ he says as he contemplates future projects, including a percussion concerto for the Los Angeles Philharmonic and a piece for the National Symphony Orchestra to commemorate the 50th anniversary of John F. Kennedy’s inauguration.

Regardless, the deep lyricism of “Neruda Songs’’ and “Songs of Love and Sorrow’’ is one of the ways in which Lorraine Hunt Lieberson left an indelible mark on Peter Lieberson’s art during their nine years together, and one of her enduring legacies. Through their collaboration, he says, “the power of the melodic line became so evident to me, and how that carried everything through, carried the whole heart of the piece.’’