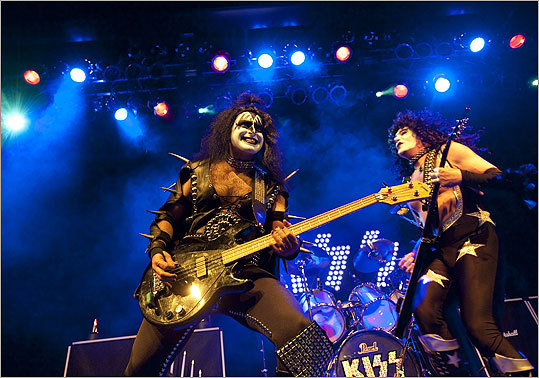 FOXBOROUGH - You couldn’t swing a microphone stand on Route 1 the other night without hitting a fake rock star. At Showcase Live, bands mimicking Kiss and Rush were promising to rock and roll all night for the packed house. Less than a half-mile away at Fusion 5, U2 copycats were regaling the crowd with a note-perfect “Angel of Harlem.’’

At a time when a pair of tickets to a concert by the biggest rock bands can run in the hundreds of dollars, tribute bands are gaining newfound respect, drawing big crowds, and earning more money than ever.

It used to be that tribute bands played bars for little more than free beer. Most paid homage to classic rock acts of the ’60s and ’70s - the Rolling Stones, the Beatles - and heavy metal bands like Judas Priest. But the sheer number and variety of tribute bands has exploded, branching out to modern-era acts such as Pearl Jam, the Dave Matthews Band, and even the Arctic Monkeys. And they’re not playing for drinks anymore. Today’s tribute bands are playing major nightclubs, concert halls, and in some cases arenas - earning thousands of dollars per gig.

“They’re definitely more successful,’’ says Dan Millen, who has been booking tribute bands into such venues as Harpers Ferry, the Hard Rock Cafe, and the Middle East for the past decade. “It’s kind of a bummer for [smaller-scale promoters] like me, because tribute bands were my little secret for a long time.’’

Showcase Live, in fact, has become something of a home base for the homage set. The Kiss/Rush show sold out the 1,050-capacity club in the shadow of Gillette Stadium, and the upcoming calendar includes a dozen groups copying everyone from Johnny Cash to the Who to Nirvana.

Concertgoers and industry watchers say there are several reasons this is happening. One is the economy - it’s a lot cheaper to see a fake U2 than the real thing - but other factors include a growing sense of nostalgia among baby boomers and Generation Xers as well as dissatisfaction with much of the rock music that the industry pumps out these days.

“You’ve got to blame some of it on the music business because we’ve been force fed such crappy music,’’ says John Kane, an artist from Salem who was listening to Lotus Land, the Rush tribute band at Showcase Live on a recent Friday night.

The shift is creating plenty of opportunities for tribute bands, especially for the best known of them. The Australian Pink Floyd show - an elaborate homage to the British progressive rock band that has played at the 2,800-seat Orpheum Theatre - sold $3.4 million worth of tickets in 2009, according to the concert industry trade publication Pollstar. The multimedia Beatles tribute show Rain made Pollstar’s list of top 100 touring acts, coming in at number 69 with $11.7 million in ticket sales.

“They sold over 260,000 tickets,’’ says Pollstar editor Gary Bongiovanni. “In many cases tribute bands are performing better than new artists that have record deals. There exists a real public demand for them, especially when it’s a group that you can’t readily see.’’

Even the band Badfish, a tribute to the ’90s ska-punk group Sublime, sold $1.2 million in tickets last year. Badfish will play Boston’s House of Blues, which holds 2,400 people, on April 24, and John Innamorato, who books the Lansdowne Street venue for LiveNation, expects it to sell well. “They usually do 2,000 people,’’ he said of Badfish. Led Zeppelin tribute Get the Led Out plays the Lansdowne Street club April 10; Captured: The Journey Show plays July 3.

Like many of the most popular tribute acts - Beatlejuice (The Beatles), Appetite for Destruction (Guns ‘n Roses), and Kashmir (Led Zeppelin) - Badfish has one important thing going for it: “The ones that seem to do really well are the tributes [to bands] that really don’t exist anymore,’’ Innamorato says, “because this is really the only way you’re going to get to hear that music live.’’

For the consumer, the savings are steep. Most of the faux groups charge $10 to $20 a ticket, whereas the bands on which those acts are based - from the Dave Matthews Band to the Eagles - can command ticket prices between $75 and $250. “This is a quick, simple, cost-effective night out,’’ says Showcase Live’s programming director, Kevin Mitchell.

And at a tribute concert, fans know they’re going to hear a band’s most popular songs.

Jennifer Hayes, 30, of Winthrop, who was at the Kiss/Rush tribute show, says she would be more inclined to see a Pearl Jam tribute act than the real McCoy. “I think a tribute band would play the Pearl Jam songs I know from the ’90s,’’ she says, “whereas Pearl Jam now is probably not playing the stuff that I know.’’

Today’s tribute bands also take their craft more seriously, dedicating themselves to replicating the music perfectly. Even the groups that don’t attempt to resemble their heroes physically make sure they have every guitar riff and drum fill down pat.

“We all study our parts,’’ says Chris Nelson, the Geddy Lee soundalike in Lotus Land. “And to do it as close to the record as we can is quite a high. It’s like rock-and-roll fantasy camp. If we dare attempt this tribute to Rush, we better do a really good job.’’

Even if they are only pretending to be rock stars, the rewards for the musicians in the tribute bands can be substantial. Three of the four members of Joshua Tree have quit their day jobs, due to the nearly 150 gigs they play every year. Singer Mike Golarz keeps his 9-to-5 gig - working on electron beam evaporators - but only because “it makes me comfortable to have a real job.’’

The members of Badfish, who formed in college in Rhode Island, never expected to be pretending to be Sublime nine years later. But it has become a full-time job, playing as many as 140 dates a year. “Things have changed,’’ said Joel Hanks, Badfish’s bassist and tour manager. “We’d all gone down the path of being in the original band that wasn’t really going anywhere, so we thought, ‘Oh, we’ll do a Sublime tribute show.’ At first it was just a little fun thing we did once or twice a month.’’

Badfish serves as its own opening act - as the band Scotty Don’t, playing original music - but Hanks knows most folks come for the Sublime songs. “We used to relate it to watching a good movie over and over,’’ he says. “You know how it’s going to go and how it’s going to end, but you still want to watch it again.’’