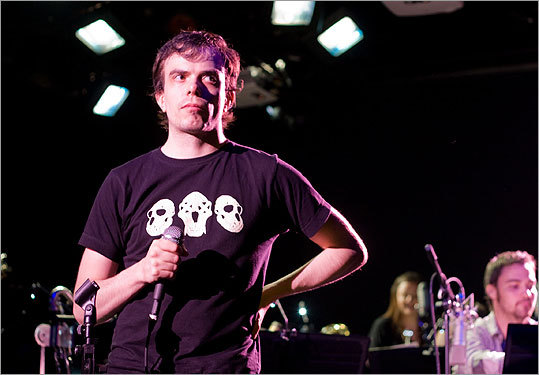 "There are a lot of stereotypes and reflexive skepticism about jazz that you need to overcome to get people to give music a fair shake," says Darcy James Argue. (Handout)
By Joan Anderman Globe Staff / February 21, 2010

“Moving to New York and starting a big band is not a reasonable adult decision,’’ says Darcy James Argue. Happily, pragmatism isn’t a big driver for the young composer, arranger, and conductor, who has followed his financially ruinous passion to become the celebrated leader of Darcy James Argue’s Secret Society. The 18-piece ensemble makes its Boston debut Thursday at the Regattabar to perform music from “Infernal Machines,’’ Argue’s debut album.

Argue uses the term “steampunk’’ to describe his sound, and while the 34-year-old artist owns neither a morning coat nor brass goggles it makes a certain sense: Steampunk is an anachronistic art and culture movement that borrows elements from the past to make new sense of the present, and Argue uses what many think of as an antiquated form - the jazz big band - to create exuberant, emotionally charged, sprawling modern music. What would it sound like, Argue asked himself as he was conceptualizing Secret Society, if he built a contemporary big band that shared a vocabulary with cutting-edge rock (not to mention classical minimalism)? And if he built it would listeners come?

“I want people who love Dirty Projectors or Tortoise or Explosions in the Sky as much as I do to listen to the record, but there are lots of stereotypes and reflexive skepticism about jazz that you need to overcome to get people to give music a fair shake,’’ Argue says on the phone from his home in Brooklyn.

Secret Society’s first gig was in 2005 at the late great CBGB’s, and in the years since the band has split its time between indie-rock clubs like the Bell House and Union Hall and established jazz venues like Iridium and the Jazz Standard. Argue is part of a wave of free thinkers - Vijay Iyer, Lionel Loueke, and Jenny Scheinman among them - pushing jazz into a hybrid-happy new landscape geared to a generation of musical omnivores weaned on shuffling playlists. Many of them, including Argue, were on the bill at this year’s Winter Jazzfest in New York’s Greenwich Village.

“People were rushing from club to club in the freezing cold, and there was a vibe and energy comparable to a big rock festival or South by Southwest,’’ says Argue, a native of Vancouver and graduate of the New England Conservatory. “I’ve wanted there to be that in jazz for so long, a sense of urgency about music that’s really vital and deadly relevant to everyone’s lives today.’’

To that end Argue is an avid blogger, poster of free downloads, a dedicated spreader of buzz, and tireless advocate for a scene that shares not just an aesthetic but a knack for grass-roots promotion with indie-rock’s vibrant community. He financed “Infernal Machines’’ with the help of his fans and released it through the nonprofit New Amsterdam Records, which bills itself as a haven for New York artists whose music slips through the cracks between genres.

“Infernal Machines’’ is a sublimely realized work, and it’s been lavished with critical praise. Yet Argue had only a passing interest in big bands a decade ago when he was playing piano in a quintet in Montreal, teaching at McGill University, and finally supporting himself as a full-time musician after years of clerking in record stores. He had even less interest in getting a master’s degree when he struck up a correspondence with legendary arranger/composer and NEC professor Bob Brookmeyer, who heard the young artist’s music and encouraged Argue to come to NEC to study with him. It was here, working week in and week out with the Jazz Composers’ Workshop Orchestra, which Brookmeyer created, that the big band habit started to take hold.

“I felt,’’ Argue explains, “that my voice was coming through.’’

Brookmeyer recalls Argue as an exceedingly quiet student who sat in the back of the class and surprised everyone with his first piece.

“It was very aggressive and scary-sounding,’’ Brookmeyer says. “He didn’t really follow some of the paths I thought he should to get maximum benefit from me, but he was a hard worker, and I realized I wasn’t dealing with a normal jazz composer.’’ As to whether Argue has a shot at bringing big band to a wider audience, Brookmeyer notes that “he’s musically gifted enough, and what he’s also doing very well is marketing himself. That’s one thing we’re really lacking, how to place what we do in front of a wider audience.’’

Argue doesn’t have a manager or an agent; interest suddenly wanes, he says, when they hear how many players are in the band. Since the record came out Argue has been reaching out to festivals, booking gigs, organizing carpools for Secret Society members, and crossing his fingers that people will come to the shows.

“One of the most important things we can do is get outside of New York, and it’s almost impossible with 18 people,’’ he says. “It’s a lot of coordination and me plunking down a lot of money.’’

Argue finances his big band habit with work as a music copyist and he’s making headway on his first official commission, from the West Point Jazz Knights - a perplexing assignment, Argue says, given the overt political nature of the music on “Infernal Machines.’’ One of the seven tracks on the album is titled “Habeas Corpus (for Maher Arar),’’ after the Canadian citizen who was deported by the United States to his native Syria, where he was imprisoned and tortured. Each of the pieces is elucidated with a brief epigram, rather than the usual expository liner notes, which Argue worried would take away from the mystery of the music.

“For listeners coming to the record free of the baggage associated with being a jazz fan, which includes this idea that you can’t listen without a knowledge of history, it made sense to represent the music a little more ambiguously,’’ he says. “I’m trying to reach people who are listening for a certain kind of storytelling in music. And that’s something that hopefully transcends genre and style.’’