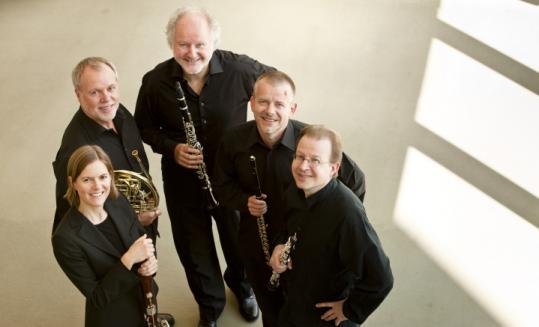 The Berlin Philharmonic Wind Quintet, all members of that august orchestra, made their Boston debut on Friday with a Celebrity Series concert at Jordan Hall. The wind quintet is, tonally speaking, a fractious bunch; only the oboe and bassoon can claim any true family resemblance, the rest a miscellany of timbres and shades.

The question for any iteration of the group is whether to regard that dissimilarity as a virtue or a problem. The Berliners fall into the latter category, and have solved the problem extremely well; their blend, their ability to unite all five disparate sounds into a collective smoothness to rival their stringed compatriots, is uncanny. But it comes with a certain sacrifice of individual distinctiveness: the flute and the clarinet less brilliant, the oboe and bassoon less pungent, the horn less forceful and deep.

The homogenization made for a somewhat milquetoast first half. Both pieces - Mozart’s K. 608 Fantasy (originally for mechanical organ, here idiomatically arranged by the group’s flutist, Michael Hasel) and Anton Reicha’s D major Wind Quintet, op. 91 no. 3 - have idiosyncrasies hidden beneath their conventional surfaces: Mozart breaks out a late-period fugue, Reicha livens up his finale with some flashy, multiple-tongued repeated notes. But the performances seemed stuck in a careful loveliness, prim and polished, but lacking energy.

The second half moved the repertoire forward in time, to some benefit; as the music pushed the envelope, however slightly, more personality would come to the fore. Both Samuel Barber’s 1956 “Summer Music’’ and Carl Nielsen’s 1922 opus 43 Wind Quintet give increased opportunity for individual display, and the players revealed glimpses of soloistic flair: Hasel’s focused sparkle, an appealing pearly whistle;

Two encores - a natty “Blues’’ by Gunther Schuller, and a sly tango, Júlio Medaglia’s “El Negro’’ (named for a car driven by the group’s former bassoonist) - inched ever closer to the ideal intersection of confidence and risk that would have made the difference between impressive and enthralling. The evening was an opportunity to appreciate the group’s sheer refinement, and also a demonstration that refinement only gets you so far.