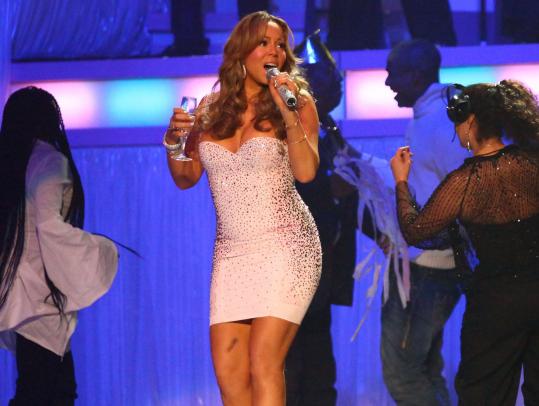 Champagne was on hand for Mariah Carey at the Citi Wang Theatre Saturday, as it was for her December show at Madison Square Garden (above) in New York. (Astrid Stawiarz/Getty Images/File)
By Sarah Rodman Globe Staff / February 1, 2010

But Mariah Carey wasn’t kidding, when, about a half hour into her performance Saturday night, she summoned her hair and makeup team to the Citi Wang Theatre stage for a touch-up. “I know this is an over-the-top moment,’’ Carey said with a grin as she was powder-puffed and fluffed while sipping her vanity brand of Angel champagne from a personalized flute. (Oenophiles take note, the Rose is coming!) And although she later sincerely thanked the crowd for tolerating her prima donna antics it’s precisely that mix of diva and daffiness that endears Carey to her fans and that worked to make the hour-and-40-minute show a captivating mix of sparkle, silliness, and vocal pyrotechnics.

Indeed, almost every aspect of the show was an improvement on her last swing through the Hub at the TD Garden in 2006. Even divas have to downsize; the Wang was not quite sold out.

But what the show lacked in confetti blasts and video screens it made up for in intimacy. Crucially, the smaller hall meant vastly superior sound quality for her best-selling blend of pop, retro soul, gospel, and hip-hop.

Carey spun through her two-decade career of hits. While there were many images of love, including the joy of her married life with Nick Cannon on “The Impossible,’’ there was no “Vision of Love’’ as she gave shorter shrift to her early adult contemporary ballads and concentrated mainly on her latter day, fidgety hip-hop soul incarnation.

The seven member band - including three snazzy vocalists - was as tight as Carey’s outfits. The tickling percussion and bubbly bass lines of newer tracks like “Touch My Body’’ were crisply funky and the ballads soared in all the right places. Carey was in strong voice belting out old school pop numbers like “Emotions’’ and rhythm-heavy newer tunes like “Obsessed’’ with salty swagger and impressive technique. Carey dug giddily into the saucy kiss-off of the doo-wop laced “It’s a Wrap,’’ from her most recent release “Memoirs of An Imperfect Angel.’’

The physical stiffness that comes with the singer’s preference for stiletto heels and second skin wardrobe aside, she seemed more relaxed than ever. As a cadre of dancers and aerialists cavorted around her on the simple stage - a high white-curtained bandstand with pink trim - Carey reveled in the energy of the crowd and in simply singing the songs as opposed to worrying about arena-mandated spectacle. That down-to-earth vibe led to easy, clearly unplanned comic banter. At one point, before dedicating the ballad “Angels Cry’’ to the Haiti quake victims, Carey quipped, “I’m going to put on my serious hat, which is a really small hat.’’

The hat may be small, and the songs often frothy and cotton candy sweet, but the voice remains big.