BSO and Davis give new ‘St. John Passion’ a US premiere 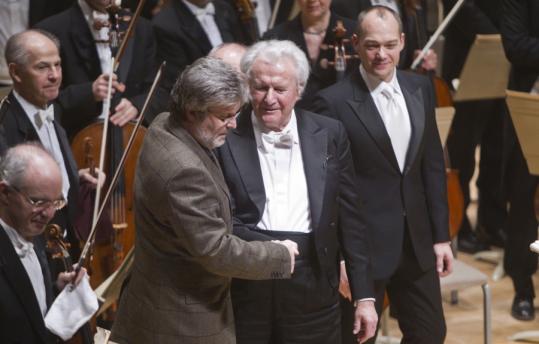 Composers once worked hard to untether their music from the demands of church and state so they could be free to write whatever they pleased. They succeeded in the West, though you could argue that modern music in the 20th century did not always know what to do with its newly endless set of possibilities.

One way composers have approached writing music in an age of anything-goes is actually to reforge links to older traditions. In this context, perhaps it is not a surprise that recent years have witnessed a boom in contemporary oratorios and specific settings of the passion of Christ as related in the various gospels.

One of the latest entries is on offer this week in Symphony Hall, as the Boston Symphony Orchestra and the Tanglewood Festival Chorus are giving the first US performances of the “St. John Passion’’ by Scottish composer James MacMillan. A co-commission of the BSO, the London Symphony Orchestra, and several other ensembles, the work is dedicated to Sir Colin Davis in honor of his 80th birthday. Davis led its London premiere in 2008 and is on the podium again this week.

I wish I could report that the enormous amount of hard work that goes into presenting a challenging evening-length score of this nature has produced a resounding and unqualified success. MacMillan’s work has many fascinating moments and some inspired passages of choral and instrumental writing. But last night the score, to these ears, did not add up to more than the sum of its parts.

MacMillan is a devout Roman Catholic who has often written music fired by his spiritual beliefs. In this case, it was MacMillan’s underlying sincerity that seemed to hold the piece’s disparate pieces together. Scored for baritone soloist, chamber chorus, a separate larger chorus, and a large orchestra, the work is about 90 minutes long and spans 10 movements, with the final movement purely instrumental.

Severe in its overall bearing with some surprisingly tender interludes, the piece inhabits a curious sound world, with ancient and modern elements layered on top of each other. The soloist (here the excellent Christopher Maltman) is given only the words of Jesus, and MacMillan assigns most of the narration to the chamber chorus, which sings in an austere pulsing manner that evoked the feel of Gregorian chant. The large choral writing is more varied, complex, and theatrical, with the entire group of singers sometimes asked to embody an individual character. The orchestra writing was at times violently dissonant or touchingly serene.

But it was hard to discern a unifying compositional voice amidst the deluge of influences (from Bach to Lutoslawski). MacMillan has a knack for theatrical gestures, but the parts I found most compelling were the least pictorial moments, when the composer freed himself from literal representation of the narrative and let his formidable sonic imagination roam, as in the absorbing final movement, full of muscular and expansive orchestral writing. MacMillan generally struggled to draw out the universal tropes from the particulars of this narrative, but when he did, the work blossomed, as in the music written for the poignant meeting of Jesus and his mother.

The performance under Davis was exemplary, with the Tanglewood Festival Chorus in particular doing superb work with such a demanding score.

The crowd was modest in size, but the music definitely hit its mark for some in the audience, who greeted the composer with exuberant bravos.

The “St. John Passion’’ will be performed again tonight and tomorrow night.