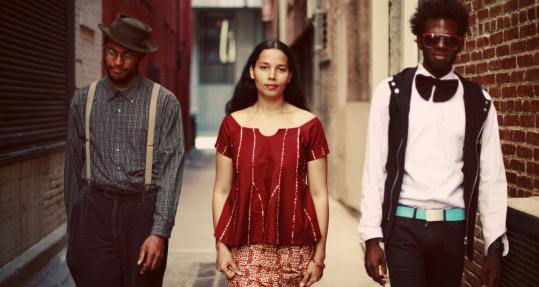 CAROLINA CHOCOLATE DROPS Formed in 2005, this North Carolina trio finally came to national prominence a few years ago with its revival of African-American string-band music. But it stands to make an even bigger splash with next month’s release of “Genuine Negro Jig,’’ a smart and snappy collison of traditional (“Cindy Gal’’) and contemporary (Tom Waits’s “Trampled Rose’’) propelled by the group’s high-stepping mix of fiddle, banjo, and jug. 8 p.m. Jan. 23. $28. Somerville Theatre. 617-876-4275. www.worldmusic.org (Julie Roberts)
January 21, 2010

NOUVELLE VAGUE Three albums into its reimagining of ’80s pop classics, this French ensemble takes some welcome detours on its new album, “3.’’ A cover of the Talking Heads’ “Road to Nowhere’’ goes country, and “Our Lips Are Sealed’’ becomes a soft-rock slice of Tropicalia. 7:30 p.m. Jan. 24. $25. Somerville Theatre. 617-876-4275. www.worldmusic.org

SHINEDOWN It’s the kind of lineup that will have fans packing the venue while completely befuddling the detractors. Shinedown, a hard-rock band with a heart of gold, joins forces with Puddle of Mudd and Skillet, two fellow bands whose guitar hooks are almost as bombastic as the choruses. 8 p.m. Jan. 26. $32.50-$50. House of Blues. 877-598-8689. www.livenation.com

OF MONTREAL Fronted by the best-dressed man in indie rock (Kevin Barnes rocks glitter and fishnets like nobody’s business), Of Montreal is on a short tour ahead of a new album expected this year. James Huggins, Of Montreal’s longtime multi-instrumentalist who performs as James Husband, will open with songs from his excellent new solo debut, “A Parallax I.’’ 8 p.m. Jan. 27. $32. Paradise Rock Club. 877-598-8689. www.livenation.com JAMES REED

FOLK, WORLD & COUNTRY
ELIZABETH LAPRELLE Most of her repertoire is a half-century older than she is, but this young old-time singer from Virginia brings astonishing clarity and emotion to the Appalachian ballads she interprets, often a cappella. LaPrelle shares the bill with multi-instrumentalist Matt Brown, another fresh-faced Americana artist with tremendous respect for the past. 8 p.m. Jan. 23. $15, $5 for students, free for ages 17 and under. St. John’s United Methodist Church, 80 Mt. Auburn St., Watertown. 617-623-1806. www.brownpapertickets.com

CARRIE RODRIGUEZ & BEN SOLLEE They’re calling it an “acoustic cafe evening,’’ which is exactly how you want to hear two of folk-pop’s most engaging new stars. Rodriguez, a sprightly fiddler and singer, quickly picked up a following after hitting the road with Lucinda Williams and Alejandro Escovedo. And Sollee, who’s brought a newfound respect for the cello as his primary instrument, comes to town ahead of an upcoming album with Daniel Martin Moore. 8 p.m. Jan. 27. $20. Club Passim. 617-492-7679. www.clubpassim.com JAMES REED

BILL CHARLAP TRIO Scion of a distinguished New York-based musical family - his father “Moose’’ was a protégée of Broadway legend Frank Loesser, while his mother Sandy Stewart sang with Benny Goodman and was a regular on Perry Como’s television show - the pianist and his trio are surely among today’s finest torchbearers of the Great American Songbook. 7:30 p.m. and 10 p.m., Jan. 22-23. $22-$23. Regattabar. 617-395-7757, www.regattabarjazz.com

GRAMERCY TRIO How about a side of tango lessons with your chamber music concert? That’s on offer here, at the Gramercy Trio’s program called “Where Sound and Motion Meet: Exploring the Link between Music and Dance.’’ Dance lessons start at 7 p.m. and a milonga follows the concert. The 8 p.m. performance will include premieres by Wheeler, Asia, Dembski, and Vores as well as a work by tango artist Sonia Possetti, performed by dancers Pracha and Martha Eamranond. Jan. 22, $12, Seully Hall, Boston Conservatory. 617-912-9222, www.gramercytrio.com.