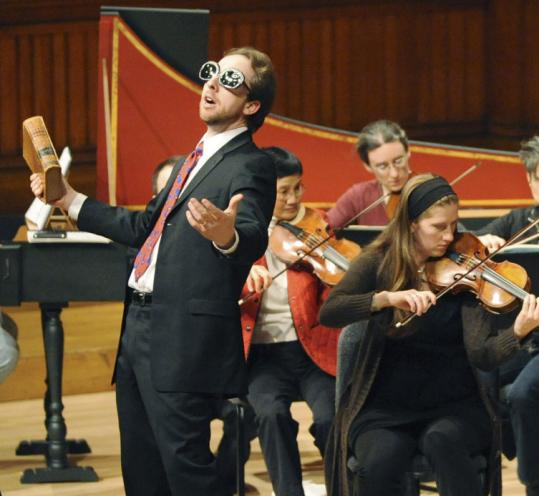 CAMBRIDGE - There is no tradition of New Year’s Day music in the United States. We have no Johann Strauss, Sr. or Jr., to be trotted out for routine gaiety. (Sousa and Copland on July 4 are as close as we get.) A music director has to be original, and it’s always pleasant when the solution is both fun and reflects the ensemble’s character.

Boston Baroque and director Martin Pearlman met this challenge Thursday and Friday with two rarely heard, one-act 18th-century operas, semi-staged and sung in English, and tied together with a popular symphony.

It is strange that Mozart’s “Bastien and Bastienne’’ isn’t more often performed. It’s short, simple, and delightful. This was Mozart’s first “Singspiel,’’ a short opera with spoken dialogue, apparently commissioned for a garden performance at the Vienna home of the famous “magnetist,’’ Dr. Anton Mesmer. Mozart was 12, but this little masterpiece has many of the hallmarks of his great operas, in embryo. There are melodic lines that express real emotion, a spiteful rejection scene, a serenade, and a soaring reconciliation. The music hints at the mature Mozart’s “poignant fusion of yearning and fulfillment,’’ as scholar Maynard Solomon put it.

Soprano Kristen Watson and tenor Lawrence Jones, two stylish, light-voiced singers, sang the leading roles with pleasing tone and excellent diction, and acted plausibly within the constraints of the space and concert-wear. They moved cleverly on the sides and front of the stage. More might have been made of the fact that these are country folk. Baritone David Kravitz sang the “supposed sorcerer’’ whose hilarious spell undoes the lovers’ estrangement. Daniel Stepner supplied a clever and apt translation.

Equally appealing - and more of a technical accomplishment - was “The Music Director,’’ a one-character opera by Domenico Cimarosa. A mature master of 41, the Neapolitan composer had written more than 60 operas when he created this delicious sendup of a conductor imposing his will on an orchestra. Kravitz returned as the title character and gave a tour de force. Placed on a platform mid-orchestra, he sang for 18 minutes, managing the difficult stops and starts as the orchestra comes in to do his bidding. He produced a loud, handsome tone, and projected the text clearly. The orchestra (actually led by Pearlman) played beautifully. They could have played certain phrases more roughly, on the first go, underlining their mistakes and making sense of the conductor’s frustration. (He may be pompous, but he’s not a fool.)

Mozart’s great Symphony No. 40 (a first on a Boston Baroque program) was performed in its original 1788 version sans clarinets. It was admirably played, but rather soberly, without risks or surprises. An early Mozart symphony, serenade, or divertimento would have captured more of the composer’s light young spirit, which, come to think of it, is just the spirit for a New Year’s Day.