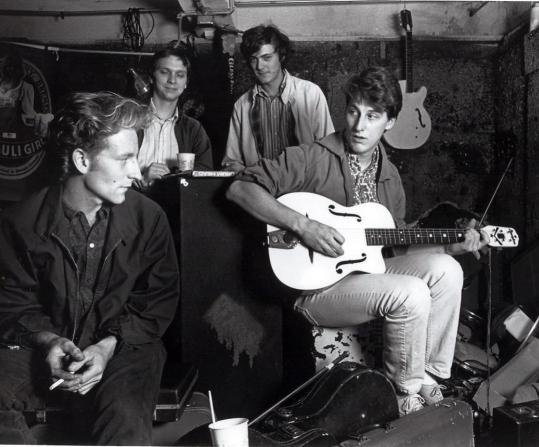 Among the footnotes in Boston’s rock ’n’ roll history, the Neats didn’t really look or sound like their hometown contemporaries in the early 1980s. Clean-cut and playing even cleaner guitar lines, the jangly rock quartet was our answer to New Jersey’s the Feelies and Athens, Ga.’s R.E.M., with whom the Neats toured early on.

The Neats dissolved in 1990, and since then it’s been hard to fully appreciate the band’s legacy because its early albums never made the leap to CD. But this year the Neats reissued their first two albums for Ace of Hearts Records, the seminal Boston label that also put out Mission of Burma. More important, though, the band will reunite as part of the First Night festivities on Thursday, its first show since 1999 (the same year original drummer Terry Hanley died).

Frontman Eric Martin, who still lives in the Boston area and whose wife works at the Globe, says the band is considering more shows and maybe even a new album if inspiration strikes. At the very least, Martin says, he’s proud of the Neats’ short but vital run. “We were a working band that just ground through our tours,’’ Martin says. “I always tell people I never regret it. It was a fun way to spend your 20s.’’

The Neats will perform at the Orpheum Theatre at 8:45 p.m. on Thursday. (Admission is free with an $18 First Night button: www.firstnight.org.)

Q. What was your impression of revisiting this music?

A. We didn’t play a lot of that early material later on in our shows, so I really hadn’t heard a lot of this stuff in a long time. I think a lot of it has held up pretty well, though, and I was surprised and really pleased with certain songs.

Q. The Neats are often mentioned as one of Boston’s great long-lost bands. What, in particular, defined you guys as a local band?

A. I think we definitely had our own sound, and I feel fortunate for being in town at that time. The music scene then really was a great community, and it was vibrant and so much fun. One thing that really distinguished us as a local band was that we lived together early on [including a few houses in Allston]. It was a Monkees kind of thing.

Q. Do you feel like you accomplished as much as you wanted in the 10 years you were together?

A. Looking back on it, we never hit the big time for a number of reasons - one of them being that we never had proper management, which I see as key now. But I look back on the band and think it was hugely successful. We did what we set out to do, which is funny considering we started out of nothing.

Q. Any regrets that the band wasn’t bigger?

A. Then, probably. But we had a level of success that allowed us to live off the band for about five years. At the time, I’m sure we wanted more, like everyone does at some level. But I’m very happy with this now and how it turned out.