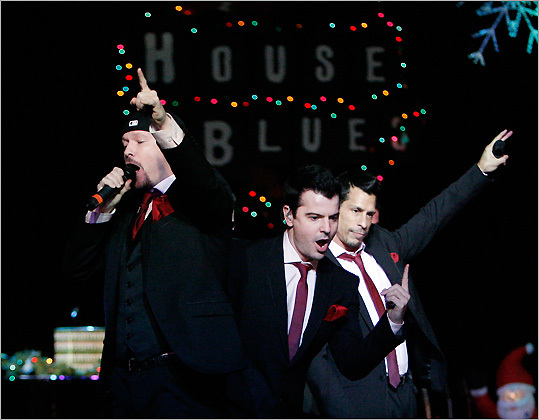 From left: Donnie Wahlberg, Jordan Knight and Danny Wood at the House of Blues on Sunday night. (Winslow Townson for The Boston Globe)
By Jonathan Perry Globe Correspondent / December 22, 2009

Neither rain, nor snow, nor sleet - nor two canceled flights nor a seven-hour delay, for that matter - was going to keep Amy Stroud and Laurel Mahaney from seeing New Kids on the Block bring down the House of Blues on Sunday. “I said we can’t not do this - we’ve gotta support our boys,’’ said Stroud, 36, as she stood with her friend near the rear of the sold-out room, both of them happily singing along with Jordan Knight as he cavorted to “Dirty Dancing.’’ “I think they love us as much as we love them.’’

With that in mind, both friends, who met at a New Kids show back in the day, braved the weekend blizzard and flew into Boston from their home state of Oklahoma. It was a rough flight, they admitted, but worth every bump. Stroud, who lives in Tulsa, said it was the 20th time she’s caught a New Kids show (including four trips to Boston). “I’ve only seen them 12 times,’’ said Mahaney, 33, who lives in Tahlequah.

Such is the kind of fanatical devotion New Kids on the Block engender more than 20 years after their debut album and more than a year into a highly successful reunion and tour that brought the now-all-grown-up boy band to the House of Blues for a benefit show supporting Toys for Tots. And a show it was - as much glitzy, campy, holiday-themed spectacle (did you expect anything less?) as concert showcasing songs from the Kids’ ’08 comeback album, “The Block.’’

Of course, we got many of the monster hits that, along with NKOTB predecessors New Edition (whose Johnny Gill joined the Kids onstage), helped spawn a generation of boy bands. “Step by Step’’ (cue rapturous screams from the overwhelmingly female audience) and the show-closing “Tonight’’ (cue more rapturous screams) were two particularly giddy trips to the time-machine.

We also got all the preening and wooing, all the choreographed dancing and clowning around, all the cheesy buddy banter among Jordan, Jonathan, Joey, Donnie, and Danny that’s always been at least as important as the music. And yes, they still looked sharp in their tailored suits as they paraded down the stage runway, taking solo turns to croon in the spotlight.

This being the season to be jolly, the boys pulled a handful of holiday nuggets (circa 1989’s “Merry, Merry Christmas’’) from their Santa goodie bag of a set list. De facto bad boy Donnie Wahlberg led a spirited rendition of “Funky, Funky Xmas’’ and jumped from a piano. Jordan, sporting a red and white Santa’s hat, unleashed his heart-melting falsetto on “The Christmas Song.’’ Joey McIntyre got off on the wrong key (“Jesus, you did not give me the right note tonight,’’ he said, gazing up at the rafters) before requesting a do-over and then making like an angelic American Idol on “O Holy Night.’’ The seven-piece gospel choir screamed sincerity. Joey’s sunglasses at night - indoors - did not.

Ernie and the Automatics opened with a set long on covers and genial bar-band blues-rock. Although the band is ostensibly led by auto titan and group namesake Ernie Boch Jr., the presence of guitarist Barry Goudreau and drummer Sib Hashian - both onetime members of the band Boston - was easily the outfit’s biggest selling point, as its medley of Boston hits made clear.

NEW KIDS ON THE BLOCK With Ernie and the Automatics

At: House of Blues, Sunday night