A new WCRB, and a shrinking classical dial 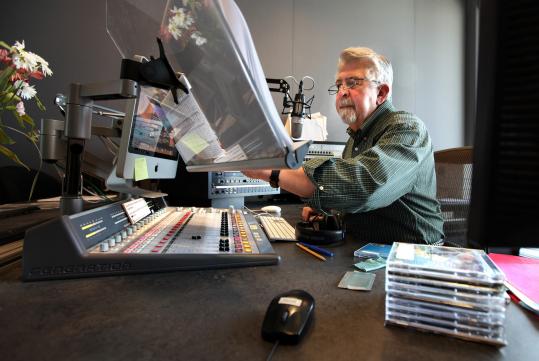 Ray Brown on the air at WCRB-FM (99.5), which was purchased by WGBH this fall. There is now significantly less classical music on the airwaves. (Photos By Pat Greenhouse/Globe Staff)
By Jeremy Eichler Globe Staff / December 18, 2009

In a city passionate about classical music, a lot of listeners get their fill by catching the Boston Symphony Orchestra and other programming on the radio.

But despite the upbeat promotional spots you may be hearing, the classical radio audience is getting less of what it wants, and deserves, now that WGBH has eliminated classical music on 89.7 and shipped most of its programming up the dial to WCRB-FM (99.5).

WGBH purchased WCRB this fall, and there is now significantly less classical music on the airwaves than before the sale. It’s also audible in a smaller listening range. So ironically, one group that has lost big in this saving of a classical music station is the classical listening audience itself.

Let’s be clear: it could have been much worse. WGBH’s $14 million purchase of WCRB was surely the best of the various realistic outcomes for the all-classical-music, all-the-time WCRB, whose parent company had put it up for sale. For Boston to lose its only 24-hour classical music station would have been a major blow to a region that prides itself on the richness of its musical offerings.

But while WGBH, by purchasing WCRB, has admirably preserved a full-time classical presence on the radio dial, it has also removed all of its classical programming from WGBH-FM 89.7. Most baffling, the cuts will include the Friday BSO broadcast from Symphony Hall, which has been a hallmark at WGBH for almost six decades. The Saturday night WCRB broadcasts will be preserved.

In a recent phone interview, John Voci, general manager of WGBH, discussed the decision to end the Friday afternoon BSO broadcasts. Taken alongside the Saturday night broadcast, Voci said these would have been “duplicative performances’’ - the same program of music potentially broadcast twice in two days - and explained that WCRB would instead be channeling its resources to broadcasting distinct programs at Tanglewood (all three per summer weekend) and the Boston Pops during its season (including broadcasts tomorrow and Dec. 24).

WGBH is presenting this as an expansion of its commitment to the BSO, which it technically is because the old WCRB used to produce much of this coverage. But again this amounts to a net loss for listeners compared to the situation before the sale.

It’s also hard to shake a nagging sense of doubt about whether the Friday cutback was really necessary. The Friday broadcasts have been a cherished aspect of local musical life since their inception in 1951. They also allowed the BSO to maintain a significant on-air presence for its Symphony Hall subscription season, a presence that will now be sliced in half.

In the old schedule, the Friday and Saturday time slots surely appealed to different listening audiences. Going forward, they might have been packaged differently to minimize what some might see as repetition. The decision would be easier to fathom if the BSO had been saddling the station with fees, or if WCRB were excitedly rolling out new innovative programming in the same time slot. But the orchestra does not charge for broadcasting its performances, and there is nothing new being offered on Friday afternoons.

It seems, in short, a pointless loss, and one that risks squandering good will among a devoted and passionate subset of the classical radio audience, whose support the new WCRB will be depending on as it transitions from commercial to public radio.

Overshadowing the larger transition has also been the critical issue of signal strength. WCRB-FM 99.5 has a much weaker signal than WGBH-FM 89.7 does, meaning that some listeners, especially those residing in southern and western parts of Greater Boston as well as in some neighborhoods of the city itself, may find they simply can’t tune in to the new classical music service. That means they are now effectively without any full-time classical radio. The Harvard-run WHRB-FM (95.3) is an essential alternative, with wonderfully adventurous classical programming, but classical is only part of that station’s vigorous multi-genre mix.

WGBH’s suggestions that those who cannot tune in 99.5 consider HD radios or listening online, seem unlikely to satisfy the disenfranchised listeners. In the recent phone interview, Voci added that “we are certainly prepared to look at options to improve coverage, possibly extending to the purchasing of another station.’’

For those who can tune it in, how is the new WCRB sounding? A lot like the old WCRB, with some definite tweaking. Historically, WGBH has had a vision of more curated programming of a wider repertory, while WCRB tended to a smaller playlist of audience favorites, or sometimes individual movements from them, often with the stated goal of listener relaxation. Classical music aficionados frequently dismissed the old WCRB as a purveyor of light background music, though, even with its weaker signal, it commanded a listenership about three times the size of WGBH’s.

These days, it seems that the current team is trying to split the difference, or in other words, stake out a middle ground between two widely divergent visions of classical radio. The “Blue Danube’’ Waltz and other light classics are still in ready circulation but playlists are also being nudged wider with, for example, some rarities by Franz Liszt or an interesting Shostakovich recording slipped into the mix.

There is also welcome inclusion of some local performances taped either in WGBH’s Fraser Performance Studio, or in the area’s various concert halls. It was a pleasant jolt to hear cellist Matt Haimovitz and violinist Andy Simionescu tearing through some arrangements of Bartok duos the other day (in a Fraser recording), or to have a second listen to portions of Gil Shaham’s Jordan Hall Celebrity Series recital from last year.

Taking a step back, crises and opportunities sometimes go hand in hand. This could be a chance for WCRB to set aside old scripts and to envision what an exciting 21st-century classical radio service might look like, with innovative programs that could meet the demands of the existing audience while also helping the station to broaden its reach.

The Web could play a much larger role in these efforts. When the New York public radio station WNYC purchased the all-classical WQXR this year, it also launched a 24-hour online stream called Q2 as a home for more edgy programming, essentially allowing WQXR to program for two different constituencies at once. According to WCRB’s director of programming Jon Solins, the station will consider launching a similar stream.

Solins and others overseeing WGBH’s new classical effort emphasize that it will evolve. Let’s hope that, having laid out the funds to buy the station, WGBH is also prepared to provide a budget sufficient not only for sustaining the old WCRB approach but for reinventing it creatively over time. In the short term, strengthening the signal must be a major priority, so that more of the city’s classical music fans can tune in and judge for themselves.