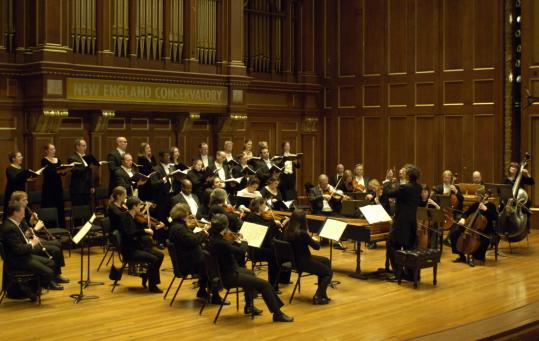 Last weekend, Boston Baroque offered its annual rendition of Handel’s “Messiah,’’ that perennial buffet of concert-hall theology, and it had all the hallmarks of the group’s style: a lean period orchestra, a compact chorus of lucid, conversationally clear transparency, and music director Martin Pearlman’s customary swiftness of tempo. But on Friday, normally reliable fuel failed to catch fire, and the proclaimed blessings were curiously mixed.

On the one hand, the familiarity produced a reading of expert clarity and refinement, the chorus rolling through Handel’s scurrying riffs with turbocharged, accurate aplomb and unostentatiously exact diction, the entire group effortlessly incorporating adept inflections into each phrase. But the overall effect was cool and a little domesticated; the abandon and risk needed for a group this size to generate grandeur was mostly missing, replaced by a nimble but buttoned-down precision. Boston Baroque’s speedy virtuosity was, this year, less the visceral excitement of a sports car and more the frictionless repose of airline travel.

Soprano Amanda Forsythe was (it was announced) battling a cold, and did seem to be treading lightly, but her fluid vocal shimmer was still in evidence; intricate ornamentation and the generally peppy pace shifted the focus to her talent for fizzy coloratura, and her “Rejoice greatly’’ was a coyly voluble exclamation. Mezzo-soprano Ann McMahon Quintero spent much of the concert in a low, soft-edged range, nonetheless producing dark, velvety tones and some beautiful, musically sensitive singing, transforming “He was despised’’ into intimate, restrained grieving. Timothy Jones’s bass-baritone was both stentorian and honeyed, the latter an especially interesting color for Handel’s preaching; but he was also the most musically passive, content to let the sequence of notes do the phrasing. Lawrence Wiliford opened the services with a clear and elegant tenor, then, in the second part’s more passionate narrative, went the furthest in risking vocal quality for dramatic intent; the brief infusion of intensity was welcome in the serenely polished context.

Every now and then, there were glimpses of a more ardent and dangerous interpretation: “He trusted in God’’ was clipped and sarcastic, and Pearlman’s whisper-to-shout reading of “Since by man came death’’ is still great, audacious drama. But the yoke of “Messiah’’ is easy on Boston Baroque, and its burden is light. This season, the result was rather polite proselytization.