Band expands, in size and sound 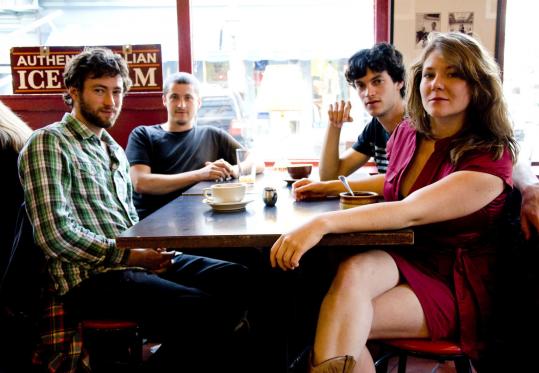 Close as they are, seated elbow to elbow in a booth at a Harvard Square pub, Celia Woodsmith and Avi Salloway still manage to give each other ample room. They’ve always been that way, on stage and off - collaborating on songs; playing shows together; brainstorming ideas to bring their music to a wider audience - since they first met as students at the University of Vermont.

That commingling of intimacy and space most prominently shows in the free-ranging roots music the two musicians have made for the past four years: first as the stripped-down, rather quaintly named folkish duo Avi & Celia; and now as the creative core of Hey Mama, a full-blown - and decidedly louder - blues-rock band.

The group, which also includes bassist Ben Kogan and drummer Jared Seabrook, plays a pair of shows tonight and tomorrow at the Lizard Lounge in celebration of its new self-titled debut (the third album for Salloway and Woodsmith overall).

This shift in direction is a natural progression toward the music Salloway and Woodsmith say they have always aimed to make.

“We are not folk traditionalists and we never have been,’’ says Woodsmith, whose big, belting voice lends a husky credibility to swamp rockers such as the slide guitar-soaked “Whiskey Bayou’’ and roadhouse boogie workouts like “Bull Woman Blues.’’ It can also go sweet and soft, however, as it does on the luminous ballad “Mountain Bones,’’ a lovely change of pace with strings. “Even when we played as a duo, we rocked out,’’ she says. “With a real band, we’re moving into more of a partnership and a musical flow, and you really can’t beat that.’’

Not surprisingly, as with many acrobatic vocal stylists, Woodsmith’s East Coast speaking voice (OK, she was born in North Carolina, but her family moved to Vermont when she was a baby) bears little resemblance to her singing instrument, which sounds much older than her 24 years.

Some of the credit, she says, goes to her parents, who always had great taste in music. Woodsmith grew up glued to their stereo, soaking up great female singers like Patsy Cline, Bonnie Raitt, and Mahalia Jackson. She sang in an a cappella group in high school. But it wasn’t until she met Salloway, a classically trained violinist-turned-guitarist, at UVM that she thought about singing in the style she had always loved listening to.

“I’m not sure I would be here if it wasn’t for Avi,’’ Woodsmith says, throwing him a smile. “But I do think [singing] was absolutely natural to me. All of a sudden, it felt like, ‘Hey, I can do this! I don’t feel ashamed or unsure.’ I just kinda went for it.’’

Salloway, also 24, was born in Northern California and was hearing music even before he came into the world. “When I was in the womb, my dad would play me Mozart on a tape recorder [near] my mom’s belly,’’ he says. “Then, when I came to life, it was American roots music. Both my parents played music, and were good friends with the Seeger family’’ - yes, he says, that Seeger family - “so that was a big influence right off the bat.’’

After college graduation in 2007, Avi & Celia, as they were then billed, drove south and began playing their music anywhere they could, living out of Salloway’s car for months. “Which was interesting,’’ says Woodsmith - especially because the musicians are not romantically involved. “Most people assume that, and I don’t mind the assumption. It’s sort of like a White Stripes allure - are they or aren’t they?’’

To date, Salloway and Woodsmith have played some 400 shows as both a duo and four-piece rock band, and 2009 has been especially busy. Hey Mama tracked the new album at the Lakewest Recording studio in Rhode Island while in the midst of a 40-date club tour last summer.

“Working with them as they came off the road really brought a lot to the recordings,’’ says Lakewest engineer Jack Gauthier, who helmed the sessions. “I think one of the reasons it worked was that they really have a great energy as a live band. We recorded the band live with barely any overdubs, which was really critical to the record sounding the way it does.’’

Salloway and Woodsmith say they’re proud of the new album, but understand there’s much more work to be done if they are to keep going - and growing - as artists with an ability to break beyond Boston. “I know it’s not going to be easy and that it will be a trial for us, but I have a lot of faith in our music,’’ Woodsmith says. “If nothing else, the energy and the soul that we put into it is hopefully what we’re going to get back.’’

HOLIDAYS FOR THE HOMELESS: A star-studded lineup of artists is set for the “6th or 7th Boston Christmas Cavalcade for the Homeless’’ benefit next Thursday at Johnny D’s in Somerville. Hosted annually by Cape Cod musical mainstay Chandler Travis, this year’s bash features performances by special guest Livingston Taylor as well as Mission of Burma’s Clint Conley and Gang of Four’s Hugo Burnham, Dennis Brennan, Jenny Dee and the Deelinquents, Merrie Amsterburg, and many more. All proceeds go to the Somerville Homeless Coalition. Tickets for the 7:30 p.m. show are $15 or whatever you can afford. Go to www.somervillehomelesscoalition.org or call 617-623-6111 for more info.

HEY MAMA Plays CD-release shows tonight and tomorrow at the Lizard Lounge, starting at 9:30 p.m. (8:30 doors). Tickets are $12 ($10 in advance at www.brown papertickets.com).