What pops up when you put someone’s music on random

“You’re lucky,’’ says Sonic Youth guitarist-singer Thurston Moore, “because just a few weeks ago and for a long time, my iPod only consisted of underground black-metal recordings.’’ But he’s since mixed it up to include everything from early punk to seminal jazz. We spoke with Moore this week ahead of Sonic Youth’s shows at the Wilbur Theatre Sunday (which is sold out) and Monday (with Meat Puppets and Cold Cave opening). Tickets are $29.50 at www.ticketmaster.com or 800-745-3000.

2. “Sick Things,’’ Alice Cooper. “I remember asking my parents for the album ‘Killer’ for Christmas. I have a photo of me on Christmas morning with the foldout poster of Alice Cooper hanging himself.’’

3. “Retribution,’’ Abbey Lincoln. “It really struck me how avant-garde it was for a straight-ahead jazz singer.’’

4. “Don’t,’’ Dinosaur Jr. “The first time I ever heard it was when I played it with Dinosaur at Columbia University in New York.’’

7. “Chatterbox,’’ New York Dolls. “I love that song because it’s sung by Johnny Thunders, who I always thought had the greatest punked-out voice ever.’’

8. “Stolen Moments,’’ Oliver Nelson. “It’s one of those jazz records that I got into really early on, and it stays with me. It’s a good date record.’’

9. “Another World,’’ Richard Hell & the Voidoids. “I think I might have actually ordered the album directly from Richard Hell. I think his address was in some magazine, so I sent $3 and got it.’’

10. “Never Come,’’ Viv Albertine. “She was the guitarist for the original lineup of the Slits, and she was always one of my favorite guitarists.’’

Glad we missed: “I’m not embarrassed by musical stuff. I mean, I have the theme song from ‘Buffy the Vampire Slayer’ on here. If that doesn’t embarrass me, I don’t know what would.’’ 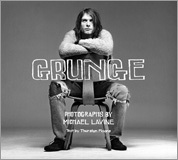 Peek inside the new book by Thurston Moore and Michael Lavine.
Your comment is subject to the rules of our Posting Policy
This comment may appear on your public profile. Public Profile FAQ