The world on a string

Violin prodigy Sam Weiser likes Tootsie Pops and fantasy football. And at 15 he’s already making a name for himself as a musician. 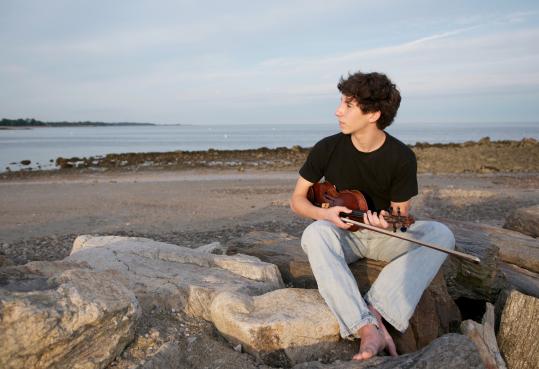 Predestined? You be the judge. All Sam Weiser knows is that he was just 2 years old when his life changed by hearing a neighbor play violin. “I was completely engrossed and apparently asked my mother for months, ‘Can I have a violin?’ I got one for my third birthday,’’ he says.

Sam is only 15 now, but the Connecticut teen has become the first pre-college student to gain entrance to the Manhattan School of Music as a double-major in classical and jazz violin. He also just released a stunning EP, “Sam i Am,’’ to be followed by a remarkably mature album by the same name in February. He’s a prodigy who fuses gypsy jazz, classical, bluegrass, and western swing, backed by established players such as SONiA of disappear fear (the album’s producer), guitarist Lulo Reinhardt (jazz legend Django Reinhardt’s great-nephew), and Dennis Chambers, who has drummed with Santana and Parliament Funkadelic.

“When we were in the studio, Sam played like he’d been doing this for decades. He was very focused and some of the tracks were first takes,’’ says SONiA, who also sings on the disc. “It was a joy working with him.’’

However, mention that the album was recorded digitally and mixed in analog and Sam just shrugs. “I don’t know those fancy terms, but it’s been pretty cool,’’ he says of the process, while sitting backstage at the Mahaiwe Performing Arts Center in Great Barrington, where he recently performed with SONiA as part of a tour honoring Daniel Pearl, the Wall Street Journal reporter and avid violinist who was killed in Pakistan by terrorists in 2002.

Sam is donating the profits from his album to the Daniel Pearl Foundation and will play at the last stop of this year’s Friends of Daniel Festival (FODFest) at the Infinity Music Hall in Norfolk, Conn., not far from Great Barrington as the tour comes full circle after also visiting the West Coast and Taiwan.

“Sam is a great kid. He really cares about this cause,’’ says Todd Mack, the Sheffield-based tour director and emcee. The free shows (donations are accepted) feature many guests from each local community. The Great Barrington date included Boston folk star Ellis Paul.

Sam’s link to Pearl came through Mark O’Connor, the Grammy-winning violinist whom Pearl admired deeply and who helped mentor Sam. After Pearl was killed, Maine craftsman Jonathan Cooper made a special Daniel Pearl memorial violin and gave it to O’Connor, who passes it annually to a standout pupil. Sam won it the past year and played it in the studio.

“Until I heard about the violin, I didn’t know much about Daniel, but it’s astonishing to feel the connection now,’’ he says. “It was humbling for me to get the violin. Had I not gotten it, I probably wouldn’t have been on the tour, nor would I have met SONiA.’

Sam’s interest in violin was fueled by attending O’Connor’s “string camps’’ in Nashville, San Diego, and now New York. Sam started by learning the Suzuki method (playing music by ear before sight reading) in Westport, Conn., at age 3, then went to his first string camp at 9.

O’Connor, who has played with everyone from Emmylou Harris to Yo-Yo Ma, gushes about Sam’s talent. “When I think of violin players coming up in the new era, I often think of Sam,’’ he says. “Because at 15 years old, he embodies what is so good about what so many young people want to do with this instrument today. When classical, jazz, and folk music styles can be so intertwined in his training and therefore in his playing, he already has become someone you want to take notice of.’’

Sam repaid the favor by recording O’Connor’s “Gypsy Fantastic,’’ a startling track with Sam bowing at tremendous speed with a dizzying array of swoops and trills. “Mark’s camps have opened so many doors for me. And the teachers there are amazing,’’ says Sam, adding that Boston’s jazzgrass legend, Matt Glaser, is one of them. The camps endorse “alternative violin’’ playing, meaning a composite of styles. The teen also studied contemporary improvisation at the New England Conservatory this past summer with noted teacher Tanya Kalmanovitch.

Asked to name his favorite violinists, other than those previously mentioned, Sam rattles off Joshua Bell, Itzhak Perlman, and Jascha Heifetz - not everyday fare for most 15-year-olds. “I also listen to a lot of horn music, because the vocabulary is so much greater,’’ he says. “I particularly like Cannonball Adderley.’’

Sam’s family is 100 percent behind him, though neither of his parents, both lawyers, were professional musicians. When asked if he plays an instrument, Sam’s father, Bruce, says, “I just play the radio.’’ Sam’s mother, Tami, is a lover of many musical styles. She helped draft the diverse list of songs that Sam did in the studio. The boy’s aunt Mara handles his MySpace and Facebook sites.

The result is music that should vault Sam into the national eye. “He’s a classically trained musician who has the heart of a folkie,’’ says Terry Irons, vice president of disappear fear records. “That’s why we’re happy to be putting out his album. I can’t wait for more people to hear him.’’