Learning to play the banjo from a master - in cyberspace 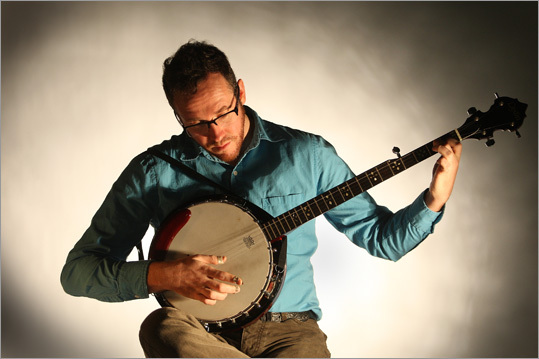 I’ve admired Tony Trischka in the best possible way - from afar. I’ve listened to his albums at home and marveled at how someone learns to play banjo like that, which is to say like a total rock star. I’ve stayed up late and watched him hold his own alongside Béla Fleck and Steve Martin on David Letterman’s show. I’ve browsed Trischka’s instructional banjo books and considered picking up a new instrument at age 31.

But the last thing I’ve ever wanted to do is have a banjo on my knee as I hit the record button on a Flip Video camera and utter these words: “Hey, Tony, this is James. Here’s my version of ‘Boil Them Cabbage Down.’ ’’ I’ve never wanted to play for the man, let alone submit a video to hear his critique. No thank you.

But that’s exactly what I may (eventually) do as a new student enrolled in his online School of Banjo, which puts a premium on interacting directly with Trischka through optional video submissions, a discussion forum, and even instant chat.

The idea of learning from a master is both exciting and terrifying, but there’s something about Trischka’s down-home demeanor that immediately put me at ease. I mean, how could I be that nervous dealing with a guy who introduces himself in the first video like this: “Hi, I’m Tony Trischka. A lot of people have trouble spelling my name. I say, it’s not that hard. It’s just T-O-N-Y.’’ (“I gotta get rid of that,’’ Trischka says later in an interview. “Steve Martin gave me that joke.’’)

Aside from the sense of community the site fosters through student profiles, another perk is Trischka’s exclusive interviews with renowned banjo players. Bill Keith, a Boston native who played with Bill Monroe and was part of Cambridge’s ’60s folk scene, talks about his influential melodic style, while in another conversation, Pete Seeger plays and discusses the banjo’s history.

Once you select your skill level (beginner, intermediate, or advanced), you have access to a list of videos. In my case, as a true neophyte whose only other instrument is autoharp, I started with a 5-minute lesson on tuning. For the beginner level, there are more than 50 videos, with topics ranging from learning new chords and songs to wearing finger picks.

Some of the lessons were a little too brief - I almost sprayed my monitor with coffee when Trischka casually announced, “We’re almost ready to play some bluegrass,’’ after I had barely mastered “This Little Light of Mine.’’ But that’s the advantage of being able to watch the videos as much as you want; no one’s going to know or judge you when you spend, say, an hour learning “This Little Light of Mine.’’

The videos you upload to the site are considered “master classes’’ that all your fellow students can view and comment on. That might sound intimidating, but I was surprised by the words of encouragement and Trischka’s honest (but gentle) feedback and suggestions.

Watching a 20-something cook from Brooklyn perform his solid, beginner’s take on “Boil Them Cabbage Down,’’ I found myself exhaling in relief. It gave me hope that someday I’ll have the confidence and skills to begin my own video with these words: “Hey, Tony, this is James.’’

For a preview of the Tony Trischka School of Banjo, go to www.tonytrischkaschoolofbanjo.com . Lessons are $60 for a three-month period.