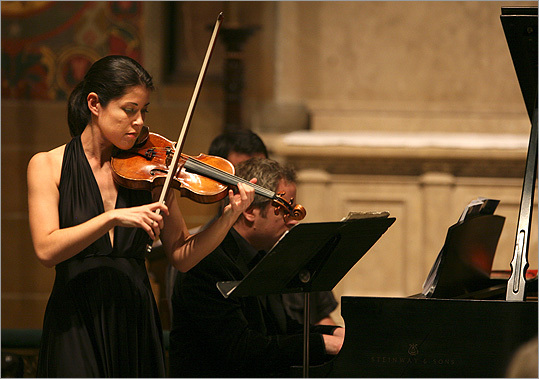 This season, the Boston Classical Orchestra and music director Steven Lipsitt are celebrating bicentennials of Felix Mendelssohn (b. 1809) and Robert Schumann (b. 1810), but last weekend, they first needed to mark another birthday: their own. For its 30th anniversary, the group commissioned Cambridge composer Howard Frazin’s “In the Forests of the Night,’’ an atmospheric overture that had its premiere on Saturday with a repeat performance on Sunday.

Frazin’s starting point was his own setting of William Blake’s “The Tyger’’ (given a rhapsodic reading by mezzo-soprano Krista Rivers and pianist Linda Osborn-Blaschke at a pre-concert talk), expanded into an arching string of nocturnes, foreboding to frightening to gently mysterious: rustling strings, keening fragments of melody. Harmonies are tonal, but used more as a coloristic resource than a structural scaffold. Compared to song and poem, the overture’s climax is shifted toward the center; the symmetry was less fearful, but provided a more wide-ranging journey. Lipsitt and the orchestra gave the piece a rich debut.

Schumann’s Violin Concerto was the last large-scale piece he completed before his traumatic breakdown, an unfortunate biographical association that led to the score’s nearly century-long suppression. (Late in life, Schumann himself, in an asylum, heard angels singing the slow movement and failed to recognize the theme as his own.) The work hinges on dramatic flair, and with assertive skill, soloist Jennifer Frautschi made a persuasive case for the rarity. The opening was forceful and dark, brooding and mercurial; for the central “Langsam,’’ its theme gently knocked off the prevailing rhythmic axis, Frautschi and the orchestra unspooled intense warmth. In place of a barn-burning finale is a puckish, almost Straussian Polonaise, as if the music has left the hall early to grab a table at the cafe. The concerto is vintage Schumann: unconventional and offbeat, the composer characteristically generous with his best tunes. The angels, in this case, got it right. (Frautschi’s encore was another heavenly tune, the Andante from Bach’s A-minor violin sonata.)

Mendelssohn’s Symphony No. 4, the “Italian,’’ closed out the evening; Lipsitt and the group played it with appealing, heavy-duty fizz, a great big sound sent bouncing across the Mediterranean landscape. Prior to intermission, Lipsitt pulled out his clarinet for a bit more froth, as at the season’s first concert, leavening a request for donations with a Depression-era favorite. This time, it was Harry Warren’s “I Found a Million Dollar Baby.’’