Beethoven, with the right bit of whimsy 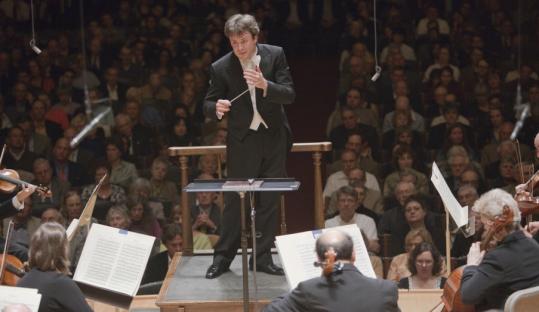 When he announced this season’s Beethoven symphony cycle, Boston Symphony Orchestra music director James Levine admitted an ulterior, fill-in-the-blank motive: He had never conducted Beethoven’s Fourth Symphony in concert. Because of his surgery, Levine still hasn’t conducted the Fourth, but BSO assistant conductor Julian Kuerti has, twice in the space of one month: First on harpist Ann Hobson Pilot’s farewell concert; and then last night, paired with the Third for the second of the four-concert survey.

The Fourth is the most overlooked of the symphonies, its relative joviality shouted down by the momentous bookends of the Third and Fifth. But Kuerti and the orchestra used extreme contrasts of volume and articulation to present the symphony as a boisterous free spirit, as irrepressible as its neighbors are determined. The heavy accents of the opening stomped like a happy child; the finale coursed fleet and carefree. Even the violently out-of-place march rhythm in the slow movement was rendered genial by its sudden shifts from loud to soft, an intruder at the ball disarmed after learning a few tentative steps. It was a grand performance of sure, confidently energetic pace.

The larger canvas of the Third Symphony, the “Eroica,’’ seemed to inspire a contrasting approach, shifting the intent from ebullience to breadth. In the opening Allegro con brio, accents were more clipped, build-ups more gradual. The steady, dotted tread of the “Marcia funebre’’ was subordinated to the longer breathing of phrase and structure, operatically ardent, rather than stark and austere. Compared with the carefree Fourth, everything was more deliberate, more carefully calibrated. Perhaps too careful: After a voluble but controlled Scherzo, the finale’s delicate opening didn’t have enough previous intensity to channel, and softer sections, particularly in the strings, seemed merely muted, rather than quietly fervent. The first half of the symphony admirably kept its powder dry, but the explosion of the symphony’s final bars arrived without any tension to release.

The “Eroica’’ was famously intended to be dedicated to Napoleon, but striking the French emperor’s name from the piece turned out to be one of Beethoven’s best career moves, as it left the music’s sense of heroic struggle applicable to a variety of narratives. The BSO retold the epic with a plausible formal gravity and restraint; but on this night, the laurels went to the mischievous.