Record-contract limbo behind her, Carly Simon revisits her classics and makes new album a family affair 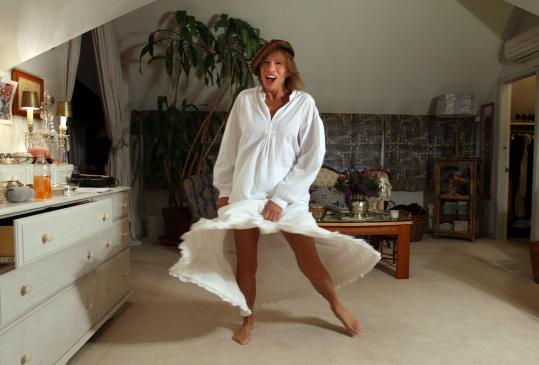 Her West Tisbury home of 37 years is a refuge for Carly Simon. On her new album “Never Been Gone,’’ Simon revisits some of her most famous songs, conjuring up the state of mind she was in when she wrote them. (Bill Greene/Globe Staff
)
By Joan Anderman Globe Staff / October 25, 2009

TISBURY - “I have this brain machine. Would you like to try it? It’s so not scary.’’ With that tantalizing offer Carly Simon scales the hidden spiral staircase that bisects her beautiful, whimsical home and returns to the sofa with a Fisher-Wallace Cranial Stimulator. She straps the portable pulse generator to a visitor’s temples.

“Close your eyes. Are you seeing any tiny flashes? I’ve been doing it for almost two months now, and I haven’t had any dreadful falls into depression or mania,’’ she says. “I love it.’’

People have been asking Simon why she has felt compelled to speak so freely ever since the notoriously frank singer-songwriter released her well-titled breakthrough, 1972’s “No Secrets.’’ As she prepares to put out her 26th studio album, the question - and the answer - still applies.

Anxious and intrepid, wounded and ardent, sensationally smart and lethally self-doubting, Carly Simon can parse her own paradoxes with finesse, and on her best songs she transposes the elegant wreckage into verse and chorus. Now she’s diving back into the remains of days past for “Never Been Gone,’’ a collection of re-imaginings of her hits (and a pair of never-heard tracks) that comes out Tuesday.

She’s referring to her contract with , which Simon is suing, claiming that the company mishandled the promotion of her last album, 2008’s “This Kind of Love,’’ resulting in poor sales. “The reason I went to Starbucks is I thought they had such perfect marketing for me,’’ says Simon, who followed in the footsteps of Paul McCartney, Ray Charles, and ex-husband James Taylor, all of whom had great success selling music to the chain’s upscale, educated patrons. But Simon says she found out just days before that album’s release in April last year that the coffee giant was ending its involvement in Hear Music, a joint venture with the Concord Music Group.

“The week my album came out I did a concert in their marquee store in [New York’s] Astor Place and there wasn’t one copy in the place. At my signing event,’’ Simon notes incredulously. “Was I supposed to sign the air?’’

Starbucks declined an interview request, and instead provided a statement that read in part: “agreed upon marketing and promotional efforts [were] carried out.’’

Meanwhile Simon, 64, forged ahead, playing as many shows in support of “This Kind of Love’’ as her stage fright allowed. The deal with Hear Music, at that point managed by Concord, prevented Simon from putting out new material for a specified period of time. (Today she is not under contractual obligation to either label.) It was Ben Taylor, Simon’s 32-year-old son, band member, and himself a solo artist, who floated the idea of re-recording songs from her back catalog.

The process was fraught.

“We invited a big party of cooks into the kitchen, and I think that in the beginning we all had very different ideas about what it would be,’’ says Taylor, who is among the handful of collaborators credited as producers under the moniker Paphiopandilium. “I thought we were going to record live versions of some old songs. What it turned out to be doesn’t bear any resemblance to that.’’

“We forged ahead in fits and starts,’’ Simon recalls. “Ben would go on tour and then come back, and we’d do some things, and for lot of the recording I was saying, ‘Huh? What’s this going to be about? I’m dealing with a lot of other things in my life, and this isn’t necessarily something I need.’ ’’

The pair locked horns, and in separate interviews both describe themselves as serial capitulators in the creative process. Simon explains that because it was so hard for Ben and his sister Sally to grow up with famous parents, she’s always felt an inordinate need for them to win: at cards, in arguments, in life. Taylor, who is in awe of Simon’s music, says he could never take the upper hand with his mother and mentor.

They fumbled their way to a fruitful partnership - one that involved Simon going back to her songs’ roots, conjuring up the state of mind she was in when she wrote them, and Ben suggesting a fresh direction. Eventually a host of trusted musical friends contributed pieces large and small to the album’s evolution, which took shape around the breakfast table, on a Caribbean vacation, in her three home recording studios.

The collection doesn’t sound so much like the culmination of a grand plan as the result of a hundred happy accidents, with a track list that includes stripped-down but full-bodied versions of some of Simon’s best-known songs: “You’re So Vain,’’ “Anticipation,’’ “That’s the Way I’ve Always Heard It Should Be,’’ “Coming Around Again,’’ “Let the River Run,’’ “The Right Thing To Do.’’

Returning to the emotions that shaped these songs was hardly a stretch, considering how many were inspired by the great love and still-painful aftermath of her relationship with James Taylor.

“It’s been a very important part of my life and my writing. I mean, how many songs on the album are about it?’’ Simon muses. She quotes a lyric from “It Happens Every Day’’: “Am I so different from that young girl you used to date?’’ and wonders “How could I have changed that much that he would hate me now? Or if not hate me want nothing to do with me, to the point where the kids are scared to give me his telephone number when I need to speak to him? It’s totally dysfunctional.’’

Simon is divorced from her second husband, poet Jim Hart, and has been in a happy relationship for 3 1/2 years with Dr. Richard Koehler, a Plymouth surgeon. More and more she stays put in her island home of 37 years, an exquisite refuge from the ebbs and flows of her career and the rest of the life’s complications. She sings about it on the new album’s title song, originally released in 1979, from the vantage point of the Martha’s Vineyard ferry: “Seagulls cry and the hills are green/And my friends are waiting for me/Great ambition is all a dream/Let me drown my pride in the sea.’’

Simon doesn’t have much of a public life these days, spending only a few weeks a year at her New York City apartment and largely eschewing dinners and galas for the more fundamental pleasures of her children (and grandchild, Sally’s 2-year-old son, Bodhi), who both have homes on her property, and the dogs, lambs, horses, and donkey that roam the meadows on her land. But the artifacts of pop stardom and pedigreed childhood fill Simon’s house: an Andy Warhol silkscreen of her, a Jules Feiffer sketch (“A Dance to Carly on Her Birthday’’), a 1944 poster commemorating the 20th anniversary of Simon & Schuster, the publishing house her father cofounded.

This house is also where - if Ben Taylor’s vision comes to pass - Carly Simon will remake herself as a 21st century independent artist. Simon is releasing “Never Been Gone’’ on Iris Records, Taylor’s label, and his plan is to maximize her online presence at carlysimon.com, to invite her fan base into the digital music world by creating a destination for home recordings, personal musings, and grass-roots video blogs.

“We mean to go micro and make her own universe so provocative that every Carly Simon fan wants to go there and have a more personal connection,’’ Taylor says. “She’s used to such a different paradigm, a big corporate music situation, and we had to keep on spelling it out. She said, ‘Do I really get to keep 60 percent of everything?’ ’’

Simon, who enjoys making records but loathes promoting them, had been flirting with the idea of retiring from the business after “This Kind of Love,’’ the ill-fated Starbucks project, which she had hoped would deliver a big payday. Now she’s talking to longtime producer Richard Perry about starting a record in January, a follow-up to their 2005 standards collection “Moonlight Serenade,’’ and Simon recently received an offer to collaborate with a well-respected R&B artist (whose name she’d prefer not to see in print for fear of jinxing it). Just the other night she wrote a new song, upstairs in her bedroom, in about 10 minutes. She starts reciting the lyrics. It’s about a man who has lied to her.