Brook Farm group was among first to hear brilliance 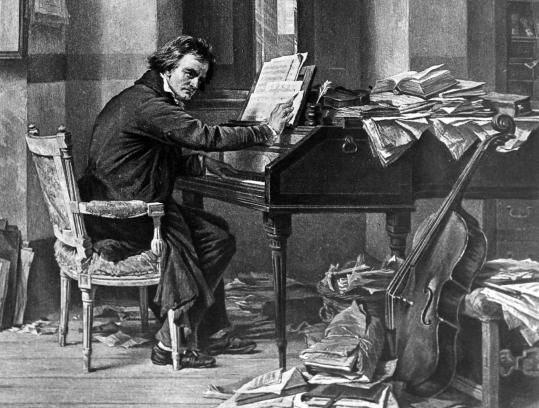 Ralph Waldo Emerson was among the Bostonians in the mid-1800s to praise the music of Beethoven (above). The BSO, currently playing a multi-week survey of Beethoven’s nine symphonies, performed his music in 1882. (Culver Pictures)
By Matthew Guerrieri Globe Correspondent / October 25, 2009

If Beethoven is standard American orchestral fare today, it’s because a group of Bostonians in the 1830s and ’40s decided he was the next big thing.

Even Ralph Waldo Emerson, not much of a music-lover, recognized Beethoven’s importance. “The music of Beethoven,’’ he wrote, “is said by those who understand it, to labor with vaster conceptions and aspirations than music has attempted before.’’ Beethoven was introduced to the Transcendentalists by their sexy muse, Margaret Fuller, drawing on the Romantic writer-artist Bettina von Arnim’s often-invented anecdotes of the composer’s irascible brilliance.

But the true conduit for Beethoven in America was a Boston-born music addict named John Sullivan Dwight. Like many Transcendentalists, he was a Unitarian minister who abandoned the pulpit. Dwight’s classmate at Harvard Divinity School, the future abolitionist Theodore Parker, said that Dwight often “mistook the indefinite for the Infinite.’’ Dwight would use that sort of optimism to champion Beethoven.

The Boston Academy of Music first brought Beethoven’s symphonies (the Fifth and the Second) to the city in 1842. Dwight was there, his review commandeering the terminology of Romanticism: Beethoven’s symphonies displayed a “boundless striving to pronounce the unutterable, to embrace the infinite . . . the hearer, spell-bound, must follow the heaven-storming Titan, as far as his strength holds out.’’ Such Romantic sentiments, expressing the inexpressible, fit the Transcendental frame of mind, already heavily influenced by contemporary German thought.

Some Transcendentalists harbored more utopian visions. George Ripley, in many ways the circle’s enabler (the first meeting of what was dubbed the “Transcendentalist Club’’ was held at Ripley’s house), founded a commune, buying Brook Farm in West Roxbury and welcoming a small band of free spirits to live the simpler life. Dwight took up residence teaching Latin and music in Brook Farm’s school, tolerating field work even as he began evangelizing on Beethoven’s behalf. (Another Brook Farmer remembered how Dwight would lead parties into Boston “to drink in the symphonies, and then walk back the whole way, seven miles at night, and unconscious of fatigue, carrying home with them a new good genius, beautiful and strong, to help them through the next day’s labors.’’)

Brook Farm soon hitched its star to the radical social theories of Charles Fourier, a French dreamer who promulgated an obsessively detailed plan for world harmony, grouping people into communities called phalanxes, each surrounding a central building called a phalanstery. Fourier’s cosmology ran wild; he infamously predicted that, at civilization’s highest point, the oceans would turn to lemonade. (Friedrich Engels admired Fourier’s cheer despite casting his lot with a more sober domain of communism, where, he ruefully noted, “there is no lemonade at all.’’) Brook Farm also became a hotbed for Swedenborgian theology, with its prospects of a universal enlightenment beyond materialism.

Dwight, now writing for the Fourierist journal “The Harbinger,’’ promptly recast his Beethovenian enthusiasm in Fourier’s terms. He filed composers under Fourier’s taxonomy of human passions: Handel represented Universal Friendship, Haydn = Paternity, and Mozart = Love. Beethoven, though, was Ambition, “the aspiring Promethean spirit . . . subduing every sincere sadness by heroic triumphs in art, which are like tears brightening into joys of most rapturous, inspired visions of a coming Era, which shall consummate the Unity of all things.’’

The prose indicates how radical-by-association Beethoven’s reputation was at the time. Dwight was living on a commune, espousing a far-out political system, delving into a mystical religion. He was, basically, a 19th-century hippie. And Beethoven’s symphonies were his music of choice. Dwight spelled it out: “In religion we have Swedenborg; in social economy, Fourier; in music, Beethoven.’’

But Brook Farm’s finances became increasingly precarious, its limited funds poured into the construction of a phalanstery, which burned to the ground shortly before its completion. The commune didn’t collapse so much as dissolve. The farmers drifted away; Ripley, saddled with debt, moved to New York; and Brook Farm became a hazy, sun-dappled memory in the minds of its former members.

But Beethoven remained preeminent. In 1852, Dwight started “Dwight’s Journal of Music,’’ and for the next three decades, set the critical agenda for Boston’s musical life, contributing in no small part to the city’s bluestocking reputation. Like many a hippie after him, Dwight took his youthful enthusiasms for eternal verities; by standing still, Dwight changed from radical to conservative as the world shifted around him. In the final issue of his “Journal,’’ in 1881, Dwight admitted as much. “Lacking the genius to make the old seem new, we candidly confess that what now challenges the world as new in music fails to stir us to the depths of soul and feeling that the old masters did and doubtless always will,’’ he wrote. But Dwight’s zeal had taken hold: As an early historian of Brook Farm wrote, “No external influence has been so potent or lasting in Boston as the genuine love for Beethoven.’’

The year 1881 also marked the debut of the Boston Symphony Orchestra; the inaugural season featured 19 Beethoven works, including a full cycle of all nine symphonies. When Symphony Hall opened in 1900, the only name inscribed on the proscenium was Beethoven’s: He was the only composer, the story goes, that everyone could agree belonged there. That unanimity might still be true today; Beethoven’s fame was perhaps the Transcendentalists’ most successful propaganda.