Her voice is commanding, and so is her presence 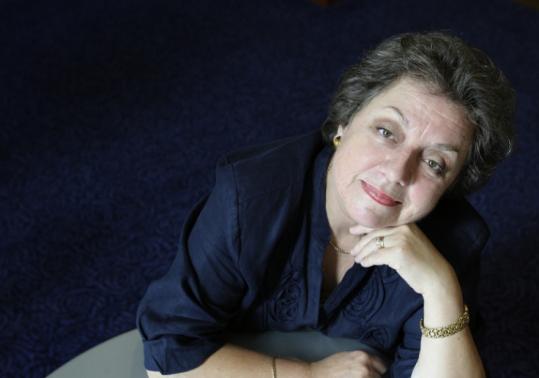 But the seductive vocal instrument Podles has been wielding in the world’s great opera houses for decades now is only part of the story. Onstage, this proudly Polish diva from Warsaw takes command like the general of an army. Her commitment to any role, be it the earth-goddess Erda in Wagner’s “Ring’’ cycle or Julius Caesar in Handel’s “Giulio Cesare,’’ is so total as to be terrifying. Some critics have even advised listeners to fasten their seat belts when she makes an entrance.

This week, Ewa Podles (pronounced EH-va POD-lesh) makes her long-awaited and long-overdue operatic stage debut in Boston, in a role for which she has received particular acclaim: the title character in Gioachino Rossini’s opera “Tancredi.’’ Presented by Opera Boston and directed by Kristine McIntyre under the baton of Gil Rose, the production will have three performances beginning Friday evening at the Cutler Majestic Theater.

During a break from rehearsals just a few days after arriving from Warsaw (“I’m still so jet-lagged and last night I didn’t sleep at all’’), Podles granted a wide-ranging and lively interview. She speaks English well, but occasionally searched for the word she wanted in French, which she learned while living in France for a few years in the late 1980s.

With one of her dazzling smiles, Podles confessed that one reason she enjoys appearing as the heroic but tragic male lead, Tancredi, was that “I love to die on stage.’’

Actually, the commercially savvy Rossini composed two endings for “Tancredi.’’ One is happy (Tancredi lives and gets the girl) and one sad (he dies). Both were originally staged in the same year, 1813, the happy one for Venice and the sad one for Ferrara. Podles, not surprisingly, prefers the tragic version for its greater interpretive possibilities. “Sometimes, for a non-staged concert version, I will do the happy ending,’’ she confided. “Because how do you die while sitting on a chair?’’

Like many of Podles’s favorite roles, Tancredi is a macho man. As a female opera singer with a very low voice (contralto, also known as alto), Podles has made a specialty of so-called “pants roles’’ that call for women to portray men. The resulting gender confusion produces a calculated and fascinating artificiality, used to considerable theatrical and musical effect by Mozart and later by the masters of the so-called “bel canto’’ style, such as Rossini, Donizetti, and Bellini.

In the opera’s libretto, adapted from a 1760 tragedy by Voltaire, Tancredi is a fearsome warrior and ruler, exiled from the Sicilian city of Syracuse around 1000 A.D. He has been sent away mysteriously by his beloved Amenaide (a soprano), who fears that he will be slain by enemy armies. In Act I of the opera, Tancredi returns, singing the beautiful aria “Di tanti palpiti’’ (“After so much heartache’’), now something of a signature piece for Podles. Complications ensue. Although Amenaide loves Tancredi, her father wants her to marry a rival for political reasons. And a love letter Amenaide has sent to Tancredi goes astray, leading Tancredi to believe she is really in love with the Moorish invader Solamir. At the end, after a furious battle, Tancredi is killed, but the people of Syracuse are saved.

It is precisely Tancredi’s nobility and pathos that appeal to Podles. “The role of Tancredi is vocally rather simple,’’ she says. “It doesn’t have all the elaborate ornamentation and cadenzas of the coloratura, of the role of Amenaide. I always say that the opera should really be called ‘Amenaide.’ But it is the character of Tancredi who brings tears to the eyes of the audience. In this role I can convey a message through words and expression. I can use the masculine color of my voice to its full effect. These days, after singing for so many years, I don’t like to show off by just singing coloratura, only to be calculating how to measure my breath or to fight over the tempo with conductors. As Tancredi, I can develop a character, and not just produce vocal tricks.’’

Podles suddenly launched into a convincing demonstration of the labors required to produce such vocal pyrotechnics, complete with heaving chest and furious inhaling and exhaling.

Wherever she appears these days, Podles tends to steal the show. Last season she returned to the stage of the Metropolitan Opera in New York for the first time in 24 years, in the small role of Cieca in Ponichelli’s “La Gioconda.’’ At the curtain call, Podles received by far the most enthusiastic ovation, leading her colleagues (she jokes) to grumble good-naturedly about her crazy fans and critics to lament her long absence from the Met.

That Podles is so comfortable on stage is hardly surprising. “I have spent all my life on stage, I feel there like a fish in water,’’ she says She was 3 when she appeared as the son (another pants role!) of Pinkerton and Cio-Cio San in a production of “Madama Butterfly’’ in a Warsaw opera house where her mother sang in the chorus. She did the part for more than a year, learning from her mother how to scream “Mama’’ to heartbreaking effect when she sees Cio-Cio San dying. The Cio-Cio San of that production was the renowned Polish soprano Alina Bolechowska. When years later Podles entered the Chopin Academy of Music to study voice, Bolechowska immediately recognized her as “Butterfly’s Baby’’ and took her on as a student, becoming what Podles calls “my first and last mentor.’’

Born in 1952, Podles grew up in a Warsaw still recovering from the nearly total devastation of World War II, with severe restrictions on foreign travel. Even if singers were invited abroad for competitions or engagements, they were often unable to go because the inefficient state bureaucracy was unwilling or unable to issue visas in time. “I was lucky, because I have lived into another era,’’ Podles says with some sadness in her voice. “But many wonderful Polish singers, Alina Bolechowska for example, remained unknown outside Poland because of the restrictions.’’

Money was another problem under communism, because the Polish currency was not freely traded on the international market. “We had lots of money, but there was nothing to buy except vinegar and mustard. My husband used to wait all night at the gas station to buy gas for the car.’’

These days, Poles can travel whenever and wherever they like. Podles says joyfully that “We can buy anything in Warsaw now.’’ During the short periods when she is not on tour, she loves to spend time at her house outside Warsaw with her husband, Jerzy Marchwinski, a pianist who accompanied her to Boston (“he is everything to me’’), their daughter (“thank God she is not a singer’’), and their 15-month-old grandson. She is already booked solid through the season of 2014.

Still going strong at an age when many singers have retired, Podles replies with a lusty “Who knows’’ to the question of when she’ll stop. Contraltos are fortunate because the natural aging process for voices generally brings them lower. “I never damaged my voice,’’ she observed. “Now I’m ready to sing witches.’’