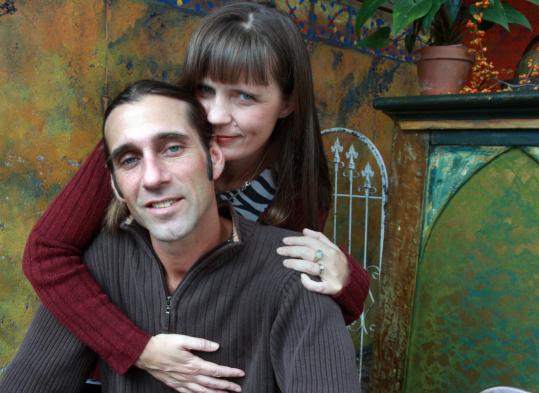 Husband-and-wife team Ken Wentworth and Liz Witham create documentaries about music for their website DocuTunes.TV. Their first one is on Kate Taylor, Witham’s mom. (Vincent Dewitt for The Boston Globe)
By Juliet Pennington October 16, 2009

The melding of music and film is nothing new, but two Martha’s Vineyard-based filmmakers are hoping to bring the concept to the next level with DocuTunes.TV, a grassroots Internet webcasting site featuring original documentaries about music and music makers. Their new - and first - full-length release, “Kate Taylor - Tunes From the Tipi and Other Songs From Home,’’ focuses on the life and music of Kate Taylor, a Vineyard resident and sister of James and Livingston Taylor. A screening of the documentary, plus a Q&A with Kate Taylor and the filmmakers, will be held at the Coolidge Corner Theatre on Nov. 17. We spoke recently with husband-and-wife team Liz Witham (Kate Taylor’s daughter) and Ken Wentworth, in the garden behind their studio off Main Street in Vineyard Haven.

Q. Coming from such a talented family, why did you choose your mom for a subject?

LW. I think that what people can relate to about her story are the choices that she made. She took time off [to raise her kids] while she was really hot and her career could have soared. Now, at 50-something, she’s restarted her career.

KW. She just has this totally endearing spirit that when you meet her, you gravitate toward her.

Q. What was your greatest challenge in making this film?

LW. At times, I found it difficult to piece together the story from the perspective of someone who didn’t know anything about her. . . . Trying to remove myself from knowing her as well as I do.

Q. To others, “Tunes From the Tipi’’ is merely a catchy title, but it was your reality. What was it like spending the summers of your youth living in a tepee?

LW. Just living that close to the land and living outside . . . it was an amazing experience that I’m grateful to have had. There were a lot of people living in tepees when I was a kid. It was a really cool time, I think, in Vineyard history.

Q. You also do a series on DocuTunes.tv called “Vineyard Scene.’’ What’s so special about the music scene on Martha’s Vineyard?

KW. As a community, music is very much respected here. . . . In each episode we try to show an aspect of the community and how everyone supports each other.

LW. We feature amazing artists who have island connections - each of whom demonstrates a different facet of island life.

Q. Are movies and music a natural fit?

LW. Yes. When I was in high school, people would always ask me things like, what is [James Taylor’s song] “Fire and Rain’’ about? I noticed from a young age that people were very fascinated about the stories behind the songs.

LW. When we first started out, the name Film-Truth was a play on the concept of Cinema Verite, but then it just kind of seemed like more of a mandate: Film the truth. Of course you can’t really film truth because it’s kind of subjective, but just finding things that are real and showing them to the world . . . that is the mandate.